MAT RYAN has closed the door on any possibility of a reunion with Ange Postecoglou at Celtic by confirming he had joined Real Sociedad, as CQN forecast NINE days ago.

The 61 times-capped goalkeeper played for the Hoops gaffer when he was in charge of the Australia international team and was linked with the Parkhead club when it became clear he would be leaving Brighton this summer.

It looked like a quick fix for Postecoglou in a position where the team had massive problems last season with Neil Lennon and caretaker John Kennedy fielding three netminders – Vasilis Barkas, Scott Bain and Connor Hazard – during a wretched campaign.

But Ryan has settled the guessing game by agreeing a two-year deal with the La Liga outfit, as reported today in the Sydney Morning Herald. 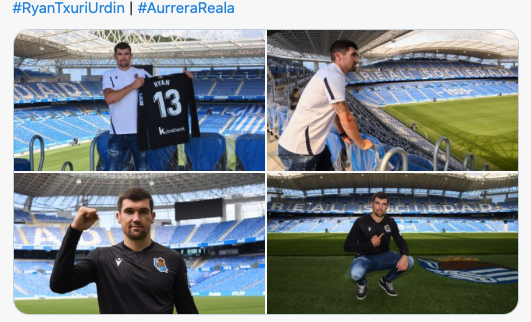 The 29-year-old shotstopper, who also has a 12-month extension option with the Spanish side, said: “I will work hard and I can’t wait to get started playing for the team.”

Ryan had one season remaining on his contract with Brighton, but after losing his first-team place to Robert Sanches, he was loaned to Arsenal midway through last season. He made only three league appearances for the London club.

The experienced campaigner has already had a stint in La Liga with Valencia where he spent two years after arriving in 2015.

Postecoglou has utilised Barkas and Bain during the pre-season games against Sheffield Wednesday and Charlton.