Celtic Quick News on News Now
You are at:Home»Latest News»SFA JUSTICE: MORELOS, ROOFE BANS: CONFUSED? YOU WILL BE
By CQN Magazine on 11th February 2021 Latest News

YOU would have thought the one club in Scotland who would not draw attention to the inefficiencies of the SFA judicial system would be the team that resides in Govan.

They claim there is “real confusion” surrounding the way incidents are cited to the disciplinary process and manager Steven Gerrard has demanded a review of the current structure.

Kemar Roofe joined Alfredo Morelos as the latest Ibrox player to be handed a ban after a review of a shocking studs-up challenge on Murray Davidson last week, a wayward lunge that saw the St Johnstone midfielder later limp off the pitch and is now considered a doubt for his side’s Betfred League Cup Final against Livingston at the end of the month.

The striker was merely yellow-carded by referee David Munro who had a clear view of the incident. It was a remarkable decision as the Perth player writhed on the ground. A fast-track hearing overseen by a three-man panel of former referees declared it dangerous play and upgraded the decision to a two-match ban. 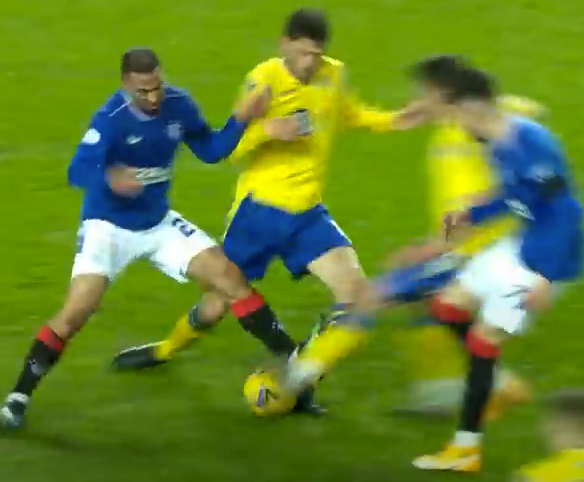 Ludicrously, the Ibrox hierarchy appealed the decision and were clearly miffed when it was kicked into touch and their player will now be unavailable for the games against Kilmarnock – a match in which Morelos will also be missing – and Dundee United.

“There seems to be real confusion within the game regarding which incidents are cited and those that are not.

“This confusion solidifies our viewpoint regarding the current system.”

Confused? Appeals? They should be ecstatic they have had two players hit with suspensions AFTER they were allowed to play the full 90 minutes of the three games in which the review panel deemed they had committed offences in the dangerous category.

CQN has investigated the incidents where Morelos received subsequent bans for red-card flashpoints in matches against Dundee United and Hibs prior to Roofe being dealt with by the three former match officals.

The controversial Colombian has not been ordered off in this campaign, but has already been banned TWICE for violent conduct. 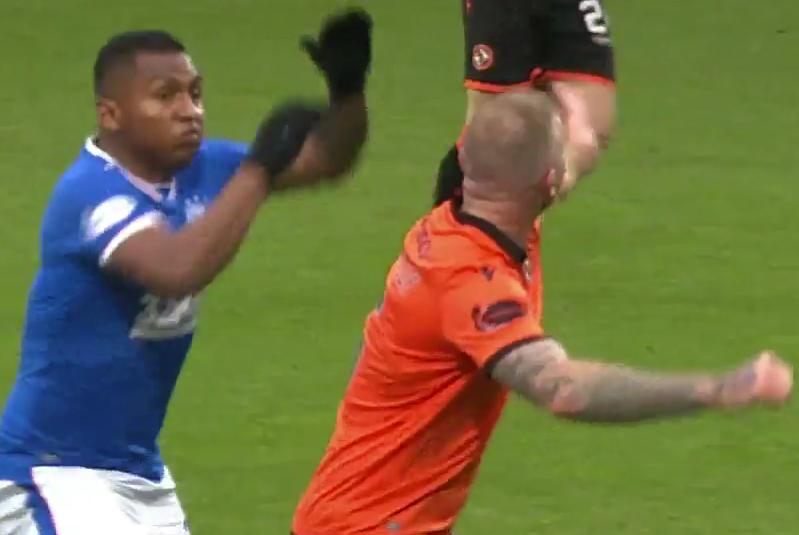 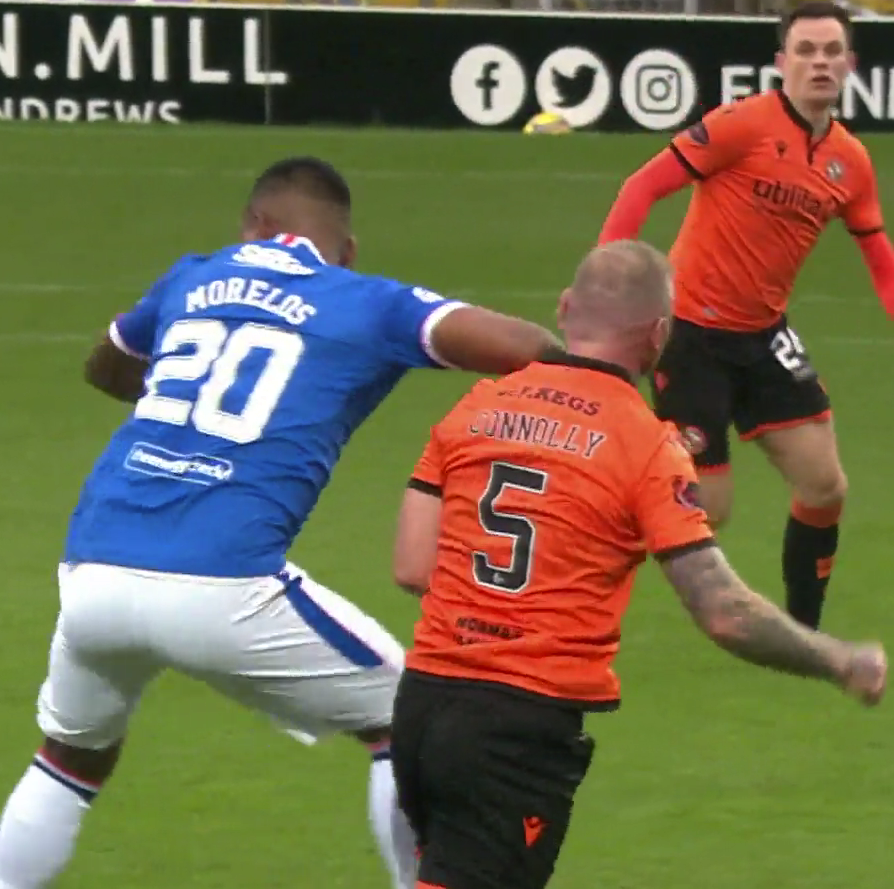 GETTING THE ELBOW…the Tannadice defender takes one in the face from the Colombian hitman.

He escaped a straight red card when he threw himself at Dundee United’s Mark Connolly in the Ibrox side’s 2-1 win at Tannadice in December. The incident occurred in only the 12th minute, but match official Steven McLean was satisfied with a booking.

Even Kris Boyd, the ex-Ibrox striker who was summarising the match for Sky Sports, observed: “He is very lucky to stay on that field. Very, very lucky.” He added: “Total stupidity.”

Gerrard’s side were saved the arduous task of having to play 78 minutes with 10 men.

There was a clear stamp from the same player on Hibs’ Ryan Porteous at Easter Road last month. Astoundingly, ref Kevin Clancy, who also had a clear view of the 17th-minute incident, took no action whatsoever. 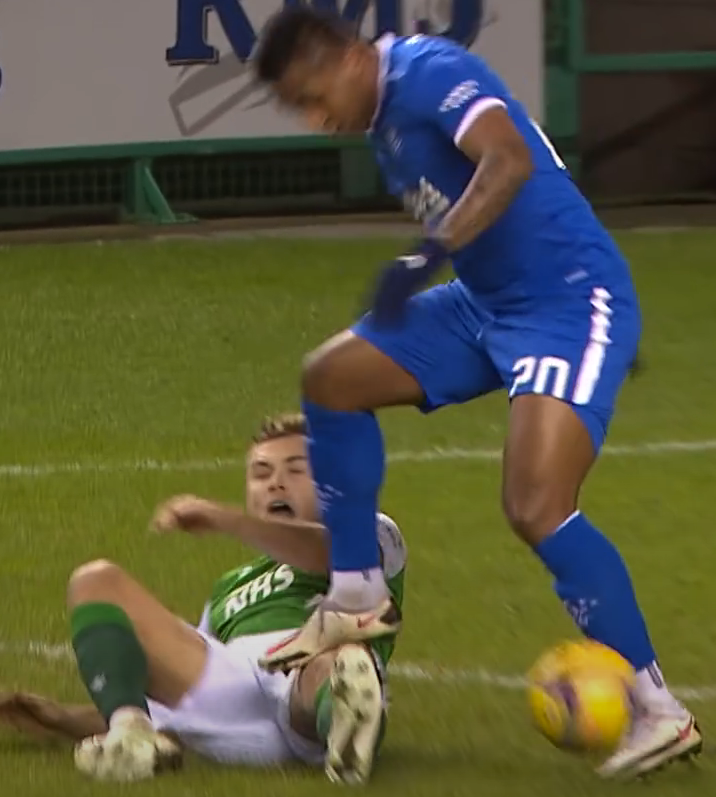 OUCH…Hibs defender Ryan Porteous screams in pain as Morelos stamps on his leg.

Gerrard’s side were allowed to play out the game with their entire complement when they should have been reduced to 10 for the remaining 73 minutes. To make matters worse, the volatile frontman got the game’s only goal in the second-half.

Justice caught up with him when he was banned for three matches after the assault on the Hibs player had been reviewed.

Roofe’s over-the-top assault on Davidson happened in the 20th minute. The Ibrox side won again by a solitary goal after being allowed to play 70 minutes with 11 men on the field.

Three odd-goal wins when they should have been reduced to 10 men in all three games.

We can only hazard a guess at the outcome of these games if the referees had made the correct decisions, but one thing is certain – it’s easier to win a match with 11 players than it is with 10.

There is no confusion about that fact.