SCOTT BROWN became only the 12th member of Celtic’s exclusive 500 club when he skippered the team to their 3-0 win over Motherwell.

The 33-year-old midfield powerhouse, who cost £4.4million when Gordon Strachan bought him from Hibs in 2007, reached the appearance milestone at Parkhead on Wednesday and was presented with a special shirt by boss Brendan Rodgers to mark the occasion.

He was welcomed into the special group  by Roy Aitken, who played 672 games for the Hoops.

The former skipper – affectionately known as ‘The Bear’ – is third in the list behind legends Billy McNeill (787) and Paul McStay (677).

Aitken, 60, now a club ambassador, said: “It’s a remarkable achievement and all credit to Scott as, since he’s come to the club, he’s been fantastic.

“He’s had a great career at Celtic and in captaining the club he’s been one of the most influential players over the past 11 years or so.

“Over the period he’s been here, he’s been consistent throughout playing in those games and he’s the reliable type of player that a manager loves to have in the team.

“He has been very influential in Celtic winning the trophies they have won over the years.

“It’s a great achievement for him and I’m sure Scott will go on and add to his 500 games in the years to come.” 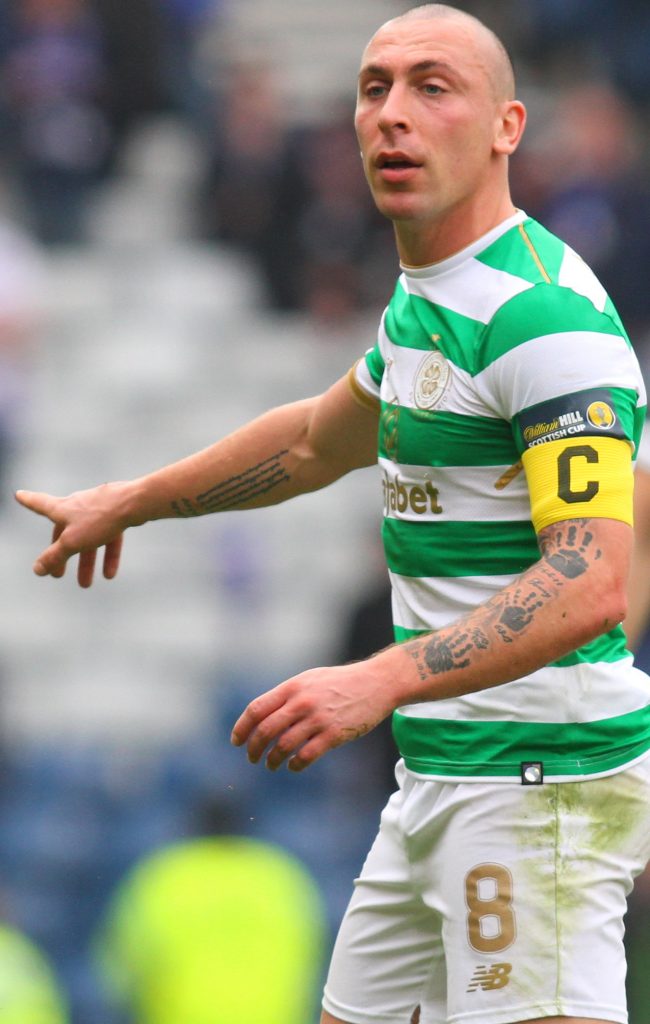 THE WAY AHEAD…Scott Brown is racking up the Celtic appearances. Pic: Geo.

Aitken, who was introduced to the first team as a 16-year-old utility defender in 1975 playing at right-back and centre-half, added: “It’s an achievement in itself. The fact that you play for so many years at one club as it takes a lot to play at that level because you are always under competition from other younger players coming through.

“You’ve got to maintain a standard of performance to be able to stay at a club like Celtic for all those years, because the expectation and demands are so high, so it’s even more credit to Scott for being able to do that during that time.

“A lot of players didn’t reach that milestone, for different reasons, as Scott has had a few injuries throughout his career, but not something that’s kept him out too long.

“Other players may have fallen short for injuries or whatever reason, but you’ve got to give credit to Scott for playing so long, and consistently at the top level for so long, for his club and country.

“To play as captain, as well, he leads by example on the pitch. He’s an inspirational character, he has tremendous quality in his performance, so he’s got all he attributes.

“He gets the best out of people around him and that’s what you need to do as Celtic captain. You need to look after not only your own game, but you need to make sure that all your team-mates are pulling their weight, as well.

“Scott will be the first to say that other people in the team are also taking on the mantle, as I had in the teams that I captained. I had some great players around me, as well, so it all adds up.”