BRENDAN RODGERS has admitted Celtic are not happy with Tom Rogic’s club v country confrontation that could see the Australian midfielder miss the game at Ibrox a week tomorrow.

The playmaker has been called up to his nation’s squad and is scheduled to meet up his international team-mates in Dubai on Thursday ahead of their Asia Cup campaign, which kicks off against Jordan in Abu Dhabi on January 6.

The Hoops boss revealed talks remain ongoing with the Aussie Football Federation while the player is keen to turn out in the Glasgow derby before linking up with his national team.

Rodgers, preparing his team for the visit of Dundee tomorrow, said: “At this moment in time, he is due to play his last game for us away at Aberdeen on Wednesday and then he is due to fly out to meet up with the Australia squad on the 27th.

“It’s not something we are overly-happy about. We want to work and build relationships with federations – and I spoke with Australian manager Graham Arnold – but you do that through working together on what is best for each player.

“We feel Tom can play and be available for the 29th and fly out after the game and meet up with the squad on the morning of the 30th and still be there virtually a week before he is due to play his first game. 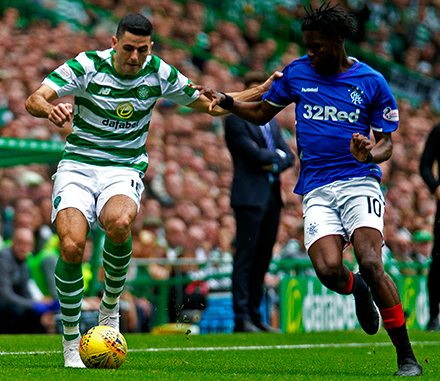 ACTION MAN…Tom Rogic starred in Celtic’s 1-0 win over the Ibrox side in September.

“Tom wants to play in the game, but he also wants to play for Australia and it’s a position I don’t think the player needs to be in.

“Celtic v Rangers games are clearly showcase games. They are great games – and he’s been great in them for us – and, of course, he can play in it and still travel and recover and prepare for the Cup competition in January.

“I know the club are looking into it more and I hope we can find a sensible solution which allows him to play and then travel and be ready for Australia.”

The £10million French forward limped off with an abductor problem in the first-half of Wednesday’s 3-0 home win over Motherwell.

The Irishman added: “He won’t be available for the game tomorrow, but we are very hopeful that next week he will be ready.”