CELTIC face Astana today in the knowledge no team has ever overcome a five-goal first leg deficit in Europe’s top flight.

However, the Hoops, with Gordon Strachan in charge, came within a whisker of achieving the feat on August 2, 2005. 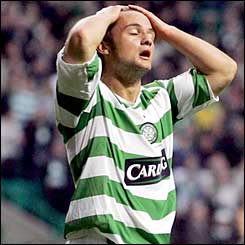 Following their remarkable 5-0 collapse to Artmedia in Bratislava in the opening Champions League qualifier, Martin O’Neill’s successor promised the tie was not over as a crowd of 50,063 watched the return at Parkhead.

Alan Thompson pulled one back via the penalty spot in the 20th minute and John Hartson netted a second on the stroke of half-time.

Stephen McManus headed in a cross from Shaun Maloney in the 54th minute and substitute Craig Beattie claimed a fourth eight minutes from time.

Strachan threw on striker Jeremie Aliadiare, who had just arrived on a season-long loan from Arsenal, and the French star missed a sitter right at the death when he was slow to react to a left-wing cross that zipped across goal.

The highly-rated youngster seemed transfixed at the far post as he barely moved when a tap-in would have taken the game to extra-time.

That was the last time the fans saw Aliadiare in a Celtic strip. The temporary contract was ripped up and he returned to Arsene Wenger’s outfit without even playing a full hour for the Hoops in two substitute appearances.

Strachan never explained why he had such a swift change of mind about the player’s ability.