The 30-year-old Celtic winger, bought by Brendan Rodgers for £4.5million from Aston Villa three years ago, has yet to start a competitive game for the Hoops this season.

Neil Lennon has looked to the youth of Mikey Johnston and Lewis Morgan while Sinclair has made cameo appearances from the substitutes’ bench.

The former Manchester City forward came on late in the game against FK Sarajevo earlier this month to score the third goal in Bosnia in the 3-1 first leg triumph in the opening Champions League qualifier, but didn’t start in the return and played no part in the 5-0 midweek win over Nomme Kalju in the second round. 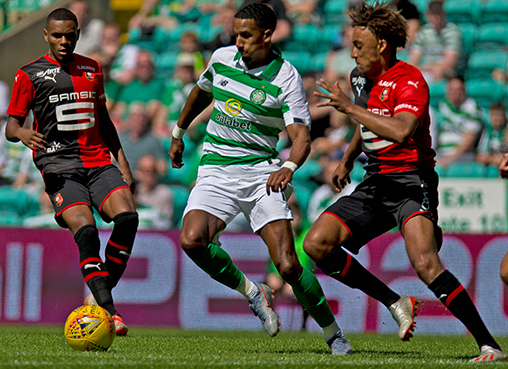 ON THE MOVE…Scott Sinclair in action during the goalless draw against Rennes.

That has alerted the Championship club and they have made an enquiry about the possibility of bringing the flamboyant attacker to Deepdale.

However, Neil, who would like to have Sinclair on a season-long loan, will not be given any encouragement by his counterpart Neil Lennon.

Newly-promoted Sheffield United were linked with a £2million move for the player last month, as CQN reported.

Lennon, though, sees the Englishman, who has scored 61 goals since his arrival in August 2016, as a key component in his squad and is in no rush to part with the former England Under-21 international.

The Hoops triggered the option to extend Sinclair’s contract for this season.