MIKEY JOHNSTON has revealed Odsonne Edouard passed up the opportunity of claiming a hat-trick in the 3-0 win over Ross County at Parkhead at the weekend.

The victory over the Dingwall outfit sees the champions sitting five ahead at the Premiership pinnacle in their quest for nine in a row.

Edouard came on as a 63rd-minute substitute for Leigh Griffiths as the Hoops struggled to add to Callum McGregor’s first-half  penalty-kick.

Within three minutes the flamboyant Frenchman had netted twice to put the home side in easy street as they coasted to their third victory over the Highlanders this season, scoring 13 goals and conceding one.

Edouard has netted 20 in this campaign to take him beyond last season’s league tally with four months to go.

Johnston, speaking to the Daily Record, said: “Odsonne has got so much talent and his confidence is obviously brimming just now. 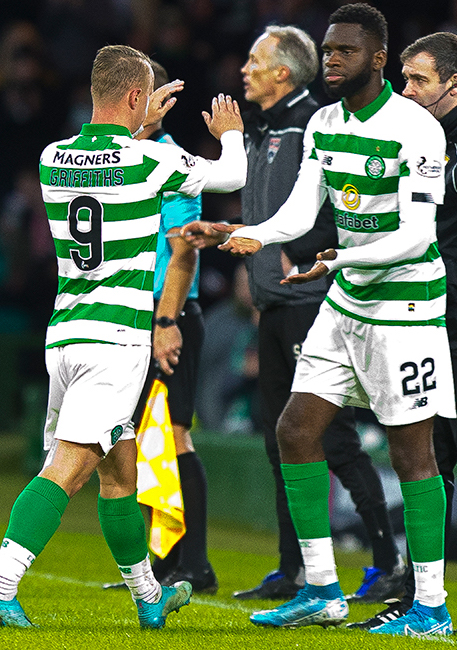 WHAT AN ENTRANCE…Odsonne Edouard comes on for Leigh Griffiths.

“Whenever he gets the ball he thinks something is going to happen. He’s unbelievable. He is quiet, he’s chilled and he’s also unselfish. We got a free-kick in the second-half and I wanted him to hit it for his hat-trick. But I was on free-kicks in the game and he said to me: ‘No, on you go, take it’.

Johnston squandered the deadball effort by slamming the ball against the defensive wall with his effort and joked: “He said to me: ‘Right, I’m not giving you it again!’

“Obviously, I should have put it in the net, but it was nice of him.

“I think he is just enjoying his football. He is scoring week in and week out and he is unbelievable for us. You never know what is going to happen in the future, but he is a special talent.

“Everyone inside Celtic knows his qualities and knows how special he is.”