BUNGLING referee John Beaton was accused of not understanding the laws of the game after disallowing a perfectly good goal from Daizen Maeda at Tannadice last night.

Celtic were leading through Callum McGregor’s 12th-minute strike in their Scottish Cup quarter-final against Dundee United at Tannadice when the match official dropped a clanger.

In the 35th minute, James Forrest and Josip Juranovic combined on the right before the impressive Croatian full-back fired over a low cross. Giorgos Giakoumakis, who would go onto claim a double, took a swipe at the ball, but it bounced up and ricocheted onto his arm before deflecting across the goalmouth.

Japanese forward Maeda sprinted in at the far post to apply the finish touch and prod the ball beyond keeper Benjamin Siegrist.

It looked good, but the whistler had other ideas. Play was pulled back and the relieved home side were awarded a free-kick with Beaton signalling it was for handball.

OOPS…Daizen Maeda pounces to prod a defflection off Giorgos Giakoumakis past keeper Benjamin Siegrist, but the ‘goal’ is ruled out. 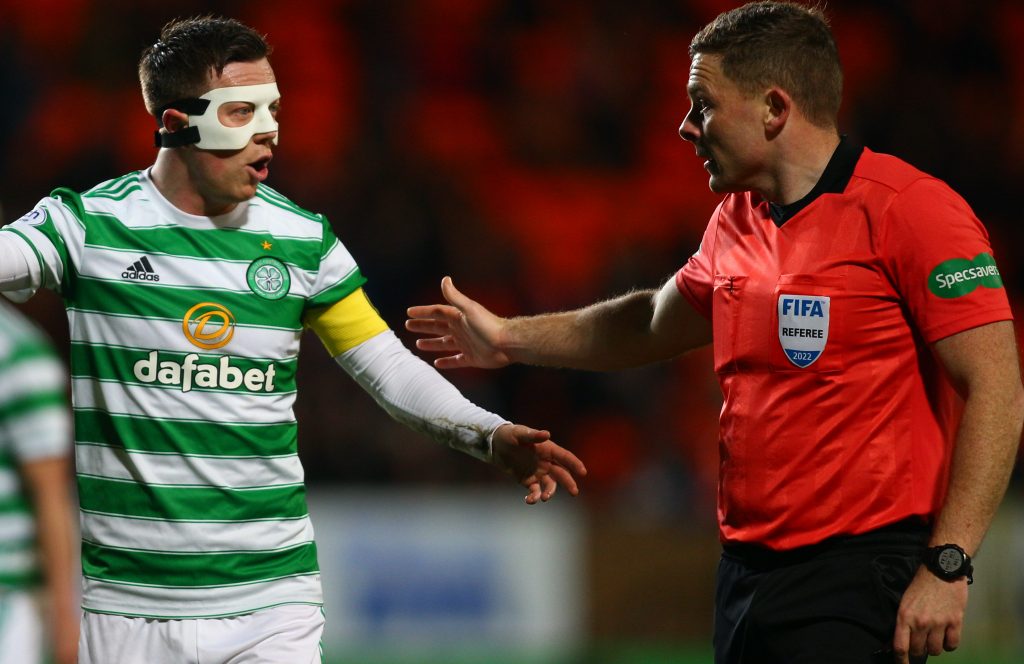 Premier Sports host Darrell Currie cited the IFAB handball rule that was amended in the close season – goals should not be ruled out for accidental handball unless it’s the offending player who scored.

Obviously, Beaton had made the wrong call and Currie told viewers: “Under the laws of football that were changed in the summer to say that if a player has an accidental handball in the build-up to the goal, so he’s not the player who puts the ball into the back of the net, if it goes to a team-mate who scores.

“The goal should stand.”

Former Hoops striker Chris Sutton, working as a match analyst for the satellite sports channel, said: “He’s the best player in the world, Giakoumakis, if he can kick the ball under his arm and deflect it in Maeda’s path.

“You’d expect John Beaton to know the laws of the game. That’s the bottom line and he clearly didn’t.”

It didn’t matter in the end as the Greek hitman claimed two in the second-half to guide the Hoops through to the semi-final where they will meet Giovanni van Bronckhorst’s Ibrox outfit next month while Hibs and Hearts meet in the other last-four confrontation.