Celtic Quick News on News Now
You are at:Home»Latest News»CELTIC IN TALKS WITH ‘MARATHON MAN’
By CQN Magazine on 6th October 2019 Latest News

CELTIC have opened talks with Scotland international Callum McGregor to offer a contract that could keep him at the champions for life.

The 26-year-old midfielder penned an extension in December that takes him through to the summer of 2023.

However, the Hoops are determined to repel any unwanted interest from clubs in the January window with ex-boss Brendan Rodgers linked with the Glaswegian in August.

Marathon Man McGregor showed his top form with an outstanding performance in the 2-0 win over Cluj in the Europa League Group E clash at Parkhead on Thursday night.

He dovetailed superbly with skipper Scott Brown and his exquisite through ball for Boli Bolingoli shredded the Romanian rearguard and saw the Belgian left-back set up Odsonne Edouard for the opening goal in the 20th minute. 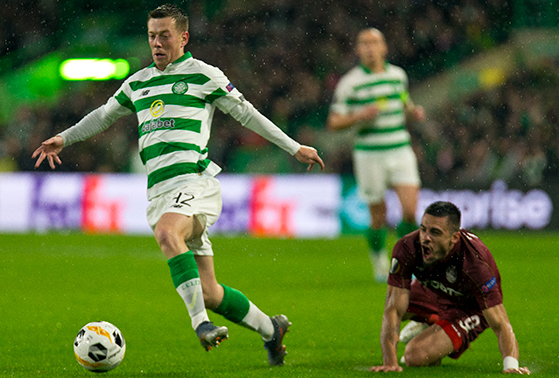 SEE YOU LATER…Callum McGregor races away from a Cluj defender.

Scotland’s title kings saw McGregor’s Scotland team-mate Kieran Tierney leave in the summer in his £25million switch to Arsenal and they are determined the team’s playmaker will not take the same route across the border.

Boss Neil Lennon, speaking to the Sunday Mail, admitted: “We’re in talks at the minute, so we’re hoping to get that one finalised.

“There was interest in him, there was no question about that. That doesn’t surprise us.

“We held on to him and it’s important we do the right thing.

“The principled thing is to give him a new deal, he deserves it.”

The Irishman added: “In the talks we’ve had so far, Callum is receptive to staying. I don’t know how long he has left, but we’re hoping to give him an improved contract ,anyway.”

McGregor played more first team game than any other footballer in the world at top-class level last season and will be in the midfield again this afternoon at Livingston.

* DON’T miss the unbeatable match report and best action images from Livingston v Celtic this afternoon – only in your champion CQN.