ANGE POSTECOGLOU has hit out at the”couple of idiots” who disrupted Celtic’s 2-1 win at Ibrox yesterday.

And Scotland’s First Minister Nicola Sturgeon has also condemned the vile actions of home supporters who marred the encounter as “mindless, thuggish behaviour”.

A member of the Parkhead club’s backroom team suffered a head wound after being hit by a glass bottle at the end of the first-half with the Hoops winning 2-1 through goals from Tom Rogic and Cameron Carter-Vickers after Aaron Ramsey had put Giovanni van Bronckhorst’s outfit ahead in only three minutes.

Celtic said the man needed urgent medical treatment and had to have stitches in his head.

A statement from the club said the matter had been referred to police.

CALM BEFORE THE STORM…Filipe Jota prepares to take on Calvin Bassey while managers Ange Postecoglou and Giovanni van Bronckhorst look on.

A Police Scotland spokesman said: “We are aware of a glass bottle being thrown at Ibrox Stadium, Glasgow, during the Rangers v Celtic match.

“One man has sustained injuries as a result of this and required treatment. Inquiries are currently ongoing to establish the full circumstances.”

Postecoglou added: “It is disappointing because this is a fixture that gets beamed around the world. Two teams going at it, first and second spot.

“You don’t need a couple of idiots ruining it. I don’t know what people are trying to achieve by doing that.”

Police are also investigating another incident which delayed the start of the second-half when ground staff had to remove shards from a broken glass bottle in Joe Hart’s penalty area.

Ms Sturgeon labelled the actions of those responsible as “unacceptable”. 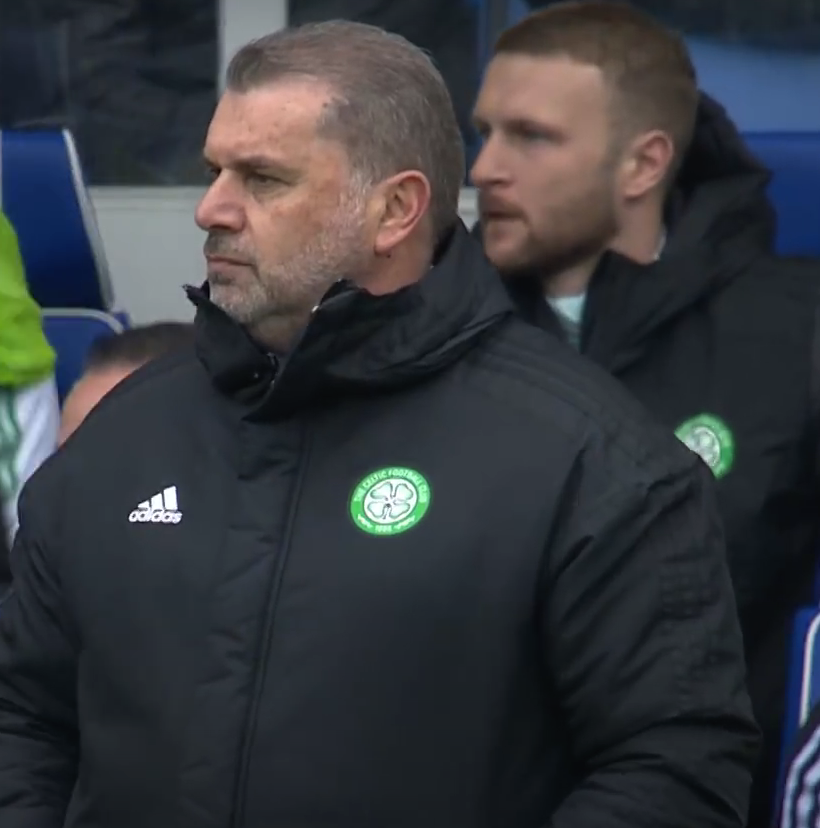 The First Minister, speaking to BBC Radio, said: “Whether it happens at a football match or in the street, people throwing glass bottles is just not acceptable.

“It’s mindless, thuggish behaviour and it has no place in any civilised society.

A supporters’ liaison officer for the Ibrox club said they were working with Police Scotland to identify the individual who threw a bottle onto the pitch at the interval.

The club and the SPFL, who are awaiting the match delegate’s report, both urged any fans with information about the incidents to contact police.