FURIOUS Kieran Tierney accused Motherwell of lack of respect following their appalling misrepresentation of sportsmanship as they stole a goal at Parkhead yesterday.

It ended Scott Bain and his defence’s run of eight successive games without conceding to the opposition and, unfortunately, the effort from the Fir Park side in their 4-1 loss was an affront of the ethics of sport.

Stephen Robinson’s side failed to return the ball after Kristoffer Ajer had put it out of play to allow the injured Ryan Christie to get off the pitch with Jack Hendry waiting to come as substitute.

With the Celtic players out of position, right-back Liam Grimshaw threw the shy down the flank in the expected fashion to allow a home player to go and retrieve the ball and get the game back in motion.

Teenager James Scott had other ideas, though, and snapped onto the throw-in, arrowed in on goal and fired in an angled drive that was pushed away by Bain. Unfortunately, it only went as far as Gboly Ariyibi and he thumped the rebound into the inviting net to cut the Fir Parkers’ deficit to one.

PARKHEAD PANDEMONIUM…scorer Gboly Ariyibi (top left) is pursued by Kristoffer Ajer after the controversial goal. James Scott, who set it up, incurs the wrath of the Hoops defence.

Tierney, who was captaining the team on his comeback after being out for over two months with a hip problem, said: “The only time I’ve seen a goal like Motherwell’s was a clip on Facebook, but they actually gave them a goal back because they didn’t mean it.”

“It’s mental. We actually suggested Motherwell give us a goal back because everyone thought it would happen and you would think someone in their team would have said: ‘Fair enough, give them a goal’.

“There was a bit of confusion and the way we centred the ball we had walked into their half as if to say: We’re going to score here’. But they started pressing, so we had to try and keep the ball again.

“That’s just football, it’s fair play. Everyone respects everyone on the pitch, but in that situation there was no respect. 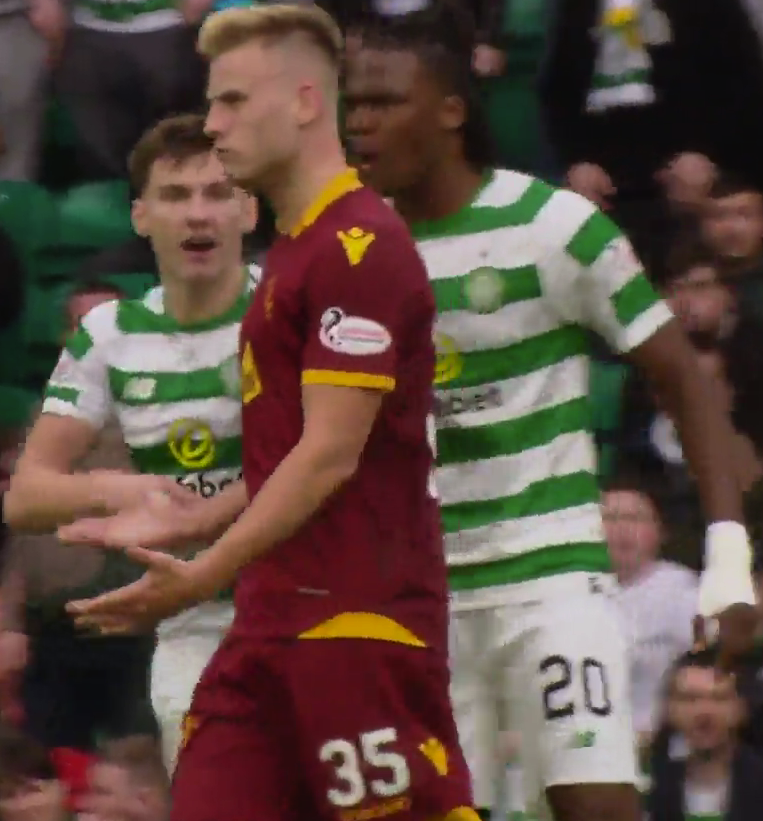 A WORD IN YOUR EAR…Kieran Tierney and Dedryck Boyata let rip at Well’s James Scott.

“Liam Grimshaw threw it over my head, so I just turned round to pass it back to Scott Bain, but the boy ran onto it and sprinted and shot.

“I actually spoke to Scott after the game and he said he wasn’t sure if he was going to shoot or pass it back to him, but he shot, Bainy saved it and they scored from the rebound.

“I’ve never seen it before, but there was no respect. They went and celebrated and there’s nothing we could do but show a reaction.

“The first couple of minutes after it were a bit feisty, but following that we got the ball down and scored two more goals and you can’t ask for more than us showing that character and mentality.

“The pressure was on us after conceding a goal like that because they knew it was in our heads, so we showed the best reaction.

“It was such a surprise. Even in the biggest games, the fiercest games, there’s still that respect where you give the ball back if your opponent goes down. 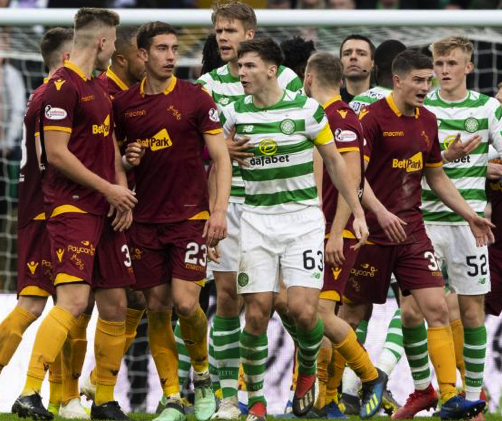 MELEE…Kieran Tierney, Kristoffer Ajer and Ewan Henderson in the midst of the chaos.

“That’s how your brought up and taught and it wasn’t good to see. There’s been plenty of times where I’ve thrown the ball back to the goalkeeper or centre-half.

“It was a surprise to us all, but, at the end of the day, we won 4-1 and it’s a great result and three points for us and we’ve passed another mentality test.

“I hope it’s a freak incident and I hope he didn’t mean it, but you never know. We contested every drop ball after that just in case something happened again and they didn’t give us it back.”

The champions remain on track for the eighth successive Premiership title following goals from Odsonne Edouard, who capped a double strike with a magnificent free-kick effort, Scott Sinclair, with his 17th of the campaign, and Oliver Burke, claiming his fourth strike for the Hoops.

Scott Brown missed the latest victory through suspension, but is poised to return against Hearts at Tynecastle on Wednesday.

The crocked Christie, though, could miss out with a hamstring strain.