Before we get down to the business of the day, thanks to The Clumpany for alerting me to the incredible actions of SPFL main sponsor Ladbrokes, who on the eve of today’s big game, Tweeted speculation about Ronny Deila losing his job.

Let’s be clear on this one.  Any muppet can Tweet what they like about Ronny’s job, but it’s not the role of the league sponsor to engage in this kind of speculation.

If you don’t remember any actions like this previously from a league sponsor, it’s because it hasn’t happened.  Ladbrokes retained PR consultancy Level 5, who are up to their knees in the business of another club, to manage their engagement of the SPFL.  This is a clear conflict of interest, bringing wholly inappropriate pressure on the Celtic manager at a critical stage of the season.

Never forget the game going on behind the Game. 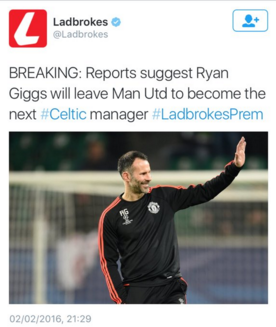 A few hours before an important game is also probably not the time to say I’m really disappointed Jozo Simunovic is out injured, but it’s impossible to look ahead to this game without that thought creeping to the fore.  Erik Sviatchenko had as good a debut as we have seen from a defender in some time on Sunday, but he needs to move from Crisis Management mode into Partnership Building mode as soon as possible.

My hope is that a Sviatchenko-Simunovic partnership allows Celtic to return to the kind of defensive performances we saw so often last season.  Until then, we’ll need a bit more protection from midfield.

The return of Scott Brown will go a long way towards this.   He has the menace required to get a foot in the way before threats reach the defence.

Aberdeen will be ready for tonight.  They lost four games in five weeks, culminating in a defeat at Celtic Park in October, but they haven’t lost a league game since, and they won their first 8 Premiership games before that period.  Whatever was going wrong inside the club at that time is resolved.  They are not quite on our heels, but a win tonight would change that.

They will also contrast our performance at Hampden with 10 men against Ross County to theirs in Dingwall a few weeks back, when they bosses the game, came from behind and left with three points.

For Celtic this is the perfect opportunity to dispose of whatever regrets they have from Sunday.  A win away to your title rivals is the perfect tonic, it will also need no motivational words.

Colin Kazim-Richards and Patrick Roberts are both fully fit but unlikely to feature in the starting line-up.  This is a job for those who know the script.

Two other important points before you go……….

The Celtic Foundation Zip Slide last year was more fun than you can imagine.  It’s happening again, this time longer and higher (top corner of the Jock Stein-North Stand to bottom corner of the Lisbon Lions-South stand).

To participate you need to do two things:

Ask your friends to sponsor you for the Foundation.

You’ve had many great times at Celtic Park, this will be another, promise.  Book now.

I see an 18-year-old Motherwell fan (with no prior record) was jailed for 5 months for releasing a flare at New Douglas Park last year.  Sentencing sheriff said:

“Smoke bombs are noxious and potentially toxic. They are dangerous to those with respiratory problems, particularly asthma, and there is the very real potential of causing panic in those confined to the immediate vicinity who have no knowledge of what has been ignited.

“This presents a clear and obvious danger, and immediate action is needed from those charged with ensuring the safety of all those present, especially young children.

“You knew what you were doing and made efforts to conceal your identity. The court takes a serious view of this type of conduct which seems to be on the increase.”

Four months in jail!  The 18-year-old soldier will almost certainly lose his job and carry the consequences for a lot longer than he carried the flare.  It’s a life-changing action, no matter if you pull your pants up over your eyebrows.