CELTIC idol Frank McAvennie has scoffed at Alastair Johnston’s preposterous claim the Hoops would have to add an asterisk to any title they may be awarded.

The Hoops were 13 points ahead with only eight games to go when the campaign went into lockdown due to the coronavirus pandemic.

Neil Lennon’s side are still on the brink of a record-equalling nine successive championships and have continually insisted they would prefer to win the championship on the pitch.

However, they could be handed the flag if the game cannot continue as the worldwide killer disease continues to claim lives.

Former Ibrox chairman Johnston said the Parkhead side couldn’t claim a full title if the term is called now – and insisted it would have “an asterisk”.

Hoops goalscoring great McAvennie, speaking to the Scottish Sun, laughed: “If he is saying it would only be eight and a half this year, does that mean Celtic would be going for nine and a half next season?

“That’s still better than nine, isn’t it? It would still be a record. 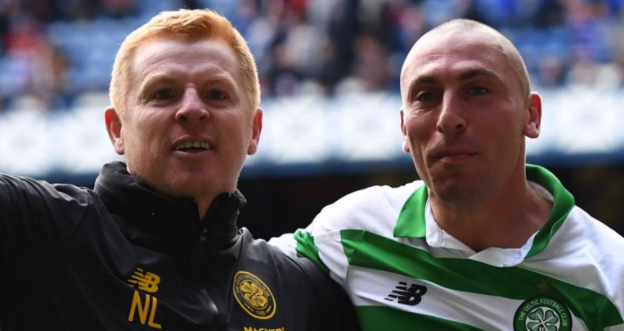 HEAVEN IN GOVAN…Neil Lennon and Scott Brown celebrate the Hoops’ 2-0 win at Ibrox in September.

“All the Celtic supporters would need to do is change the words to their ‘ten in a row’ song.

“They did that with Brendan Rodgers. He was here for ten in a row and then it was seven and a half!”

McAvennie added: “The bottom line is Celtic want to play the games if possible. They don’t want to end the season now.

“If they were asking for the Premiership to be called off that would be a different situation.

“But Neil Lennon and Peter Lawwell have both stated publicly they want the games to be played. So how can you have a go at Celtic?

“There are probably more Rangers people out there who want it called now so they can claim: ‘You never won it’.

“Celtic were on fire when the games were stopped. They were 13 points clear and flying towards the title. Rangers will say they had a game in hand and still had to play Celtic twice.

“But they were struggling for form and if football had continued I think the league would be over by now.

“There wouldn’t have been any problems for Celtic — and there won’t be any if the league is restarted.

“I want the final eight games to be played and so does everyone connected with Celtic.But it probably suits Rangers if the league doesn’t restart as their fans would then say: ‘You never won it’.

“It gives supporters something to shout about and start all the talk of not going for ten next season.”

The Hoops had been due to play at Ibrox on March 15 before the game was called off. They also had a confrontation against Steven Gerrard’s men at Parkhead to look forward to while they were scheduled to face St Johnstone in Glasgow and Hibs at Easter Road before the split.

The last time the Hoops fans witnessed their heroes in action was the 5-0 triumph over St Mirren at Parkhead on Saturday March 7 when Leigh Griffiths claimed a sensational hat-trick. Odsonne Edouard added a sublime effort and Callum McGregor may have scored the last goal of the season when he fired in a late penalty-kick.