Celtic Quick News on News Now
You are at:Home»Latest News»MESSI BACK IN TRAINING
By CQN Magazine on 21st November 2016 Latest News
LIONEL MESSI returned to training this morning to give Barcelona a boost as they prepared for the Champions League game against Celtic on Wednesday.
The Argentinian was forced to withdraw from the Barca team only an hour before their goalless draw against Malaga at the Nou Camp at the weekend. 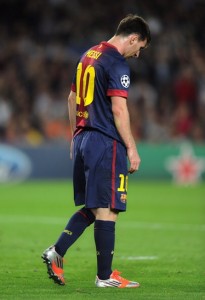 Messi had spent Friday night and Saturday morning being sick after picking up a bug.
However, the worst of the illness had passed by yesterday and Messi was back in harness with the rest of his team-mates before tomorrow’s flight to Glasgow.
Luis Suarez, who missed the Malaga game due to suspension, should reclaim his place in the starting line-up against the Hoops alongside Neymar and Messi, who hit a hat-trick in the 7-0 destruction of Brendan Rodgers’ side in September.
Manager Luis Enrique is also expected to bring back Jordi Alba. The defender has recovered from the hamstring problem that kept him out of the starting line-up at the weekend.
Gerard Pique also returned against Malaga and showed no ill effects of the ankle injury which sidelined him for three weeks.

Barca, though, will once again be without captain Andres Iniesta. His recovery is ahead of schedule, but Enrique may not risk him in Glasgow.