Celtic Quick News on News Now
You are at:Home»Latest News»‘NOW FOR THE TREBLE TREBLE,’ FORREST
By CQN Magazine on 22nd May 2018 Latest News

JAMES FORREST has revealed he is aiming for the treble treble in the new season.

The Celtic winger was in superb form throughout the historic back-to-back domestic silverware clean sweep – and now he has set his sights on going one better.

Asked about the possibility of a treble treble, Forrest replied: “Quite a few people have mentioned that already and, when we report back for pre-season training at Lennoxtown in mid-June, that’s what everyone will be wanting.

“We now know how difficult it is to earn that, but we’ll just need to make sure that we keep working hard.

“This year winning the league was much harder for us. We drew a few games and lost a few, as well, which proved that.

“It also shows what a great achievement this is and how high the standards we’ve set ourselves are since the manager came in. We’re all absolutely buzzing with how things have gone since then.

“However, we want to keep kicking on. That’s what the manager said to us last year: ‘How do you better the Invincibles season?’. But I think we’ve managed to do that because we’ve made history now and that’s incredible.

“The way the gaffer is, he’ll come back again in the summer and want our standards to be raised even further.

“He told us that, after his first season, we could have gone a little soft after doing so well and maybe we haven’t always done as well as we could, but it’s another clean sweep and that’s amazing.” 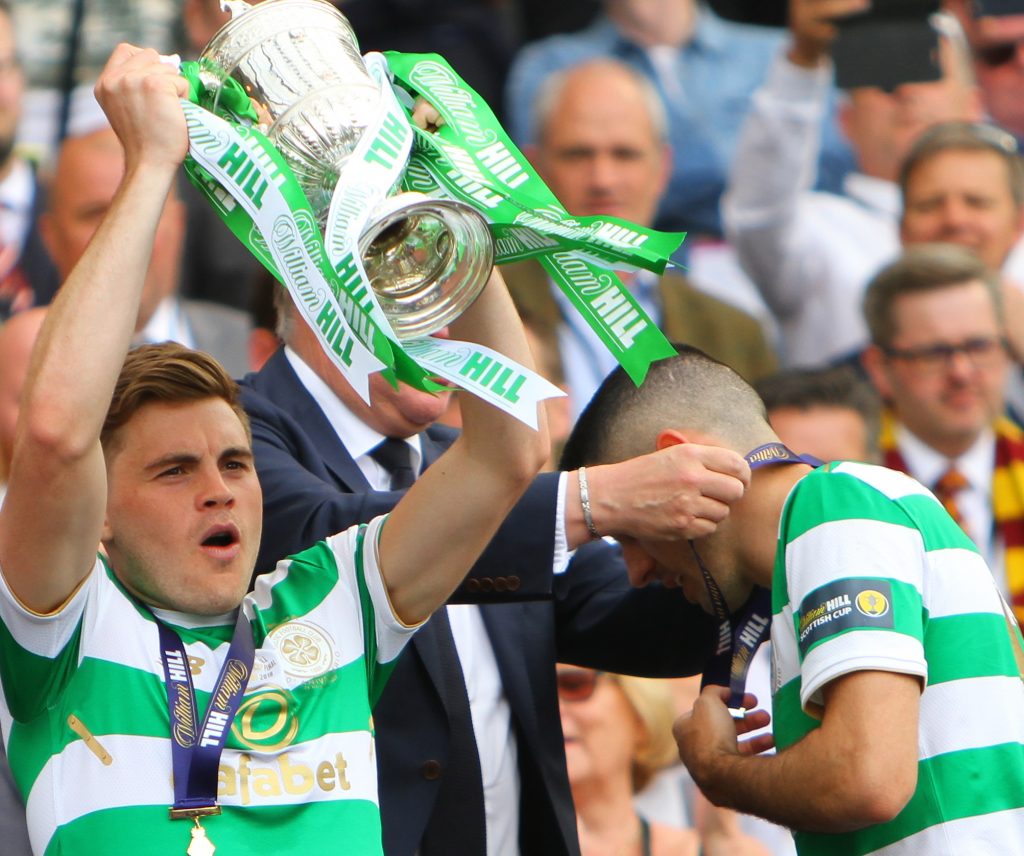 SILVERWARE SMILES…James Forrest with the Scottish Cup while Tom Rogic is presented with his medal. Pic: Geo.

Forrest has admitted he has taken more satisfaction in the latest achievement that was sealed with the 2-0 win over Motherwell in the Scottish Cup Final at Hampden on Saturday.

He added: “I think it’s better because, obviously, this has never been done before.

“We’ve had to be at the top of our game to do that for two seasons and it’s taken a lot of hard work. This is unbelievable for everyone at the club.

“We have a lot of fans working at the club and it’s great for them, as well. No-one has seen this before in their lifetime. Even getting the open-top bus was a first for us and that was also brilliant.

“The timing was great, too, what with the skipper, Scott Brown, having his testimonial on the Sunday. He was hoping it would go well at Hampden, for the club, but also for his day and he deserved it to turn out the way it did.

“Was it a weight off our shoulders to get there? It would be fair to say that.

“There’s massive pressure in every game you play for this club, but we’ve never experienced anything bigger than going into this week, knowing that the double treble was at stake.

“But we turned up at Hampden, put in a really good team performance and we were delighted with the win.”