MATT O’RILEY marked his first appearance since the middle of May with the opening goal in Celtic’s 3-3 draw with Rapid Vienna in the Allianz Stadium.

The cultured playmaker, who was excused pre-season traiing at Lennoxtown the previous week after Under-21 international duty with Denmark, curled in the opener during his 45-minute outing, as CQN reported last night.

O’Riley struck in the ninth minute to finish off a sweet-flowing move while David Turnbull and Kyogo Furuhashi claimed the others in an exciting confrontation where the Hoops led three times with the Austrians fighting back on each occasion.

PICK IT OUT…Matt O’Riley (extreme left) watches his low shot whip past the keeper for the opener.

The 21-year-old midfielder, Celtic TV, said: “It is always nice to score. It was good. It was nice to be back playing.

“There was a few cobwebs that I needed to brush off, of course, the same as everyone else.

“But I felt good overall. It took me 10 or 15 minutes to get going, to be honest, but after that I felt good.

“That was the first game, you can’t expect too much more.

“I thought there were some good bits, a lot of stuff to improve on definitely.

“We were sloppy at times, but, like I said, it was the first game.”

He said: “It was the perfect test for what we needed. 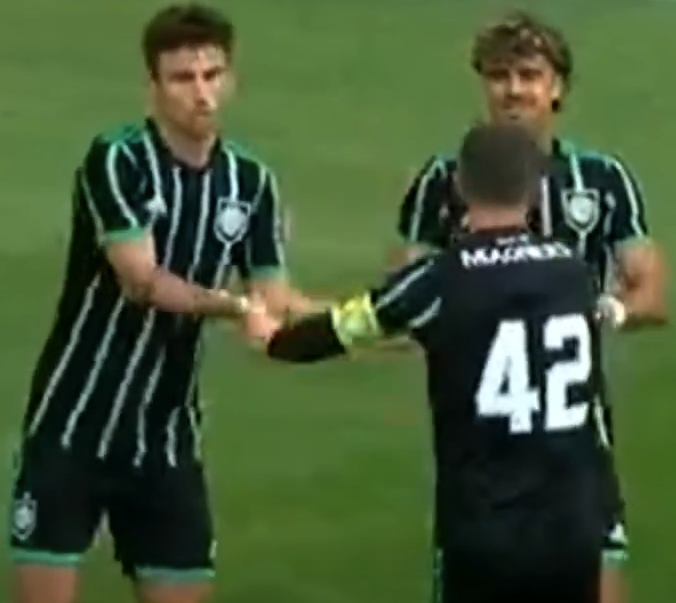 MATT FINISH…Callum McGregor congratulates Matt O’Riley on his strike with Filipe Jota poised to join in.

“They were a good side and it was a good atmosphere for a pre-season game which was nice and, yes, the physicality was what we needed going into the Scottish league where we are going to expect teams to try to stop us in different ways, whether it be kicking us or whatever it will be.

“So, it was perfect for that and, hopefully, we can build on that, get more minutes for everyone and see how we go.”

O’Riley and his Hoops team-mates now travel to the Czech Republic on Wednesday to take on Banik Ostrava.

They face Blackburn Rovers in a friendly in their first game in the east end of Glasgow on Saturday with a 12.30pm kick-off.