RYAN CHRISTIE overtook French talisman Odsonne Edouard in the Celtic scoring stakes when he hit a double in the 4-1 win over Ross County in Dingwall yesterday.

His second strike just before half-time hoisted his tally to 15 – one more than the charismatic striker who has missed the last two games against Rennes and the Highlanders through injury.

Christie opened the scoring when he latched onto the rebound after County’s on-loan Chelsea keeper Nathan Baxter manged to push away his penalty-kick in the 11th minute. The ball went straight back to the Highlander who wasted no time in first-timing it back into the inviting net.

Ross Stewart levelled for the home side when the Hoops defence disappointingly failed to deal with a routine ball into the box from a left-wing free-kick.

However, Christie restored the advantage before the turnaround when Kristoffer Ajer sliced open the opposing defence with a perfect pass and Chrsitie raced away to slot the ball past the exposed Baxter. 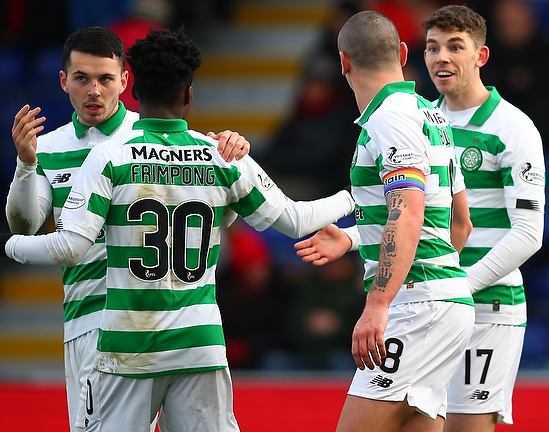 The 24-year-old Hoops playmaker, speaking to the Celtic website, said: “It’s about time from Kris, I’m always on at him! No, to be fair, it was a great pass, particularly when there were a few boys sitting in, which makes them harder to break down. It’s good when you’ve got a centre-half who can see that pass.

“He put it on a plate for me, which put us in a good position going into the break. The boys were dominant after that and I’m equally buzzing for Tom Rogic and for Mikey Johnston, as well, to get on the scoresheet.

“As for my own goal tally, I’m happy with it. There’s plenty of room to improve, though.

“I’ve got my own targets and I’m still wanting a few more by Christmas. My stats are something I’ve been working on. The gaffer has said that, me playing where I do, that allows me to be more advanced, and I’m happy to do that.”

Christie will be looking to add to the total when Hamilton Accies visit Parkhead on league business in midweek.