ANGE POSTECOGLOU has revealed the secret of the trademark sweater he has been wearing on match day since arriving in Scotland in June.

The Greek-Australian gaffer was at Parkhead only 10 days after agreeing the astonishing switch from J-League outfit Yokohama F Marinos.

Postecoglou didn’t hesitate when he was given the opportuity to become Neil Lennon’s long-term successor after outgoing chief executive Peter Lawwell pulled the plug on the three-month pursuit of Eddie Howe.

Everything was done at whirlwind pace as he prepared to leave Japan – and the fans’ favourite admitted his wife was horrified at his choice of attire.

I love this man. pic.twitter.com/jDx9NddAB4

The club hosted a Foundation Evening recently and Postecoglou took the spotlight with the supporters lapping up the former Australia World Cup manager’s anecdotes.

On his match day gear, he revealed on Tik Tok: “Everything happened in a hurry. The opportunity came and I left Japan, so I thought I’ll just pack bags and come over. My beautiful wife and kids couldn’t join me straight away.

“I’ve got no idea what I’m going to wear every day. My wife is there to guide me through that process. And so with her being away for the first game I just thought: ‘I’ll put on a jumper!’.

“Now, I don’t what to tell you what the text message from my wife was when she saw me wearing a jumper at the game, but she said: ‘What are you doing?’.

“But, then all of a sudden, it became a thing, so there you go!” 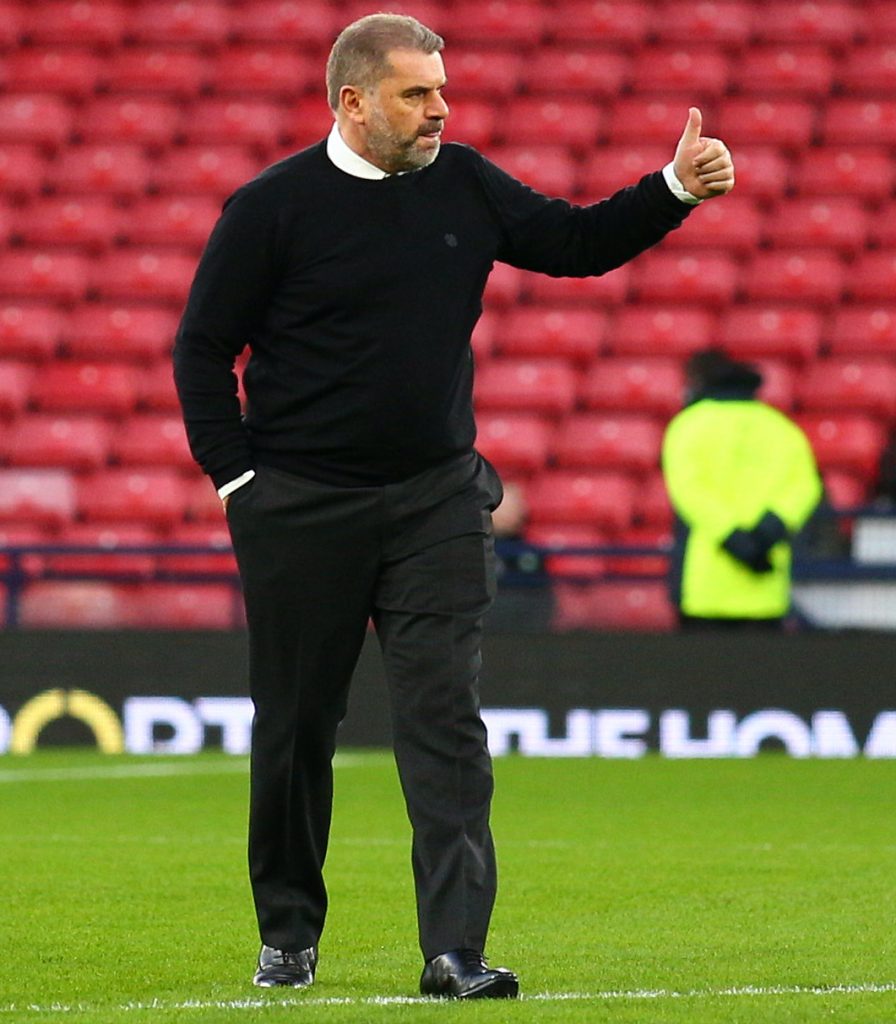 THUMB’S UP…Ange Postecoglou, suitably attired for the occasion, acknowledges the Celtic fans as he inspects the Hampden playing surface before the 1-0 Premier Sports League Cup semi-final against St Johnstone in November.

It’s an interesting yarn, but the clobber hasn’t done Postecoglou any harm.

He guided Celtic to the first domestic trophy of the campaign when they defeated Hibs 2-1 in the Premier Sports League Cup Final at Hampden with two goals from Kyogo Furuhashi, his £4.6million recruit from Vissel Kobe, six days before Christmas.

The club are sitting six points clear at the Premiership pinnacle with five games to play and they take on Giovanni van Bronckhorst’s Ibrox side in the Scottish Cup semi-final at Hampden tomorrow.

Fifty-six-year-old Postecoglou – no doubt adorned in his lucky sweater – could celebrate a phenomenal treble when the curtain comes down on an extraordinary season in the grand finale at the national stadium on May 21.