CHRIS SUTTON insists Giorgos Giakoumakis can be a key man for Celtic after his false start to his Hoops career.

The Greek striker, who arrived in a £2.5million move from Dutch minnows VVV-Venlo on deadline day after scoring 26 goals in the Eredivisie, has netted crucial goals in successive games against Alloa and Hearts.

With Kyogo Furuhashi injured and his countryman Daizen Maeda on World Cup duty with Japan, Giakoumakis has been promoted to the team’s main hitman and he has respended to the challenge with the opener in the Scottish Cup crunch with the third-tier side a week ago and the winner at Tynecastle in midweek.
Former Parkhead goal hero Sutton has been impressed by the 27-year-old hitman and said: “We’re finally starting to see what Giorgos Giakoumakis brings to the party – and it’s looking encouraging.

HAIL THE HERO…Giorgos Giakoumakis celebrates his winning strike against Hearts.

“It’s been a tough beginning for him at Celtic and he’s not had much luck. He had issues when he arrived, he got injured in the warm-up against Raith Rovers and then he missed the penalty against Livingston.”It was the worst possible start for him and some people were a bit too quick to write him off.

“This is a player who scored a ton of goals in Holland – and it wasn’t for a team that would have been dominating play and creating lots of chances.

“There’s no doubt he had a rotten start in Scotland, but fair play to him. Giakoumakis has got himself fit and he looks determined to make an impact.

“I really liked his goals against Alloa and Hearts. They were instinctive, intelligent finishes – proper striker goals.

“His movement was good and the way he stuck them away was impressive.

“It’s his all-round game I like, though. He brings Celtic something different. He’s more physical and uses his body well, holding up the ball.

“We know about the speed and movement of Kyogo and Daizen Maeda, but Giakoumakis brings a different dimension to the side.

“They need that. It’s important to mix it up at times and find other ways to win.

“The pacey strikers can play on the shoulder, but it’s good to be able to fire a ball in to the box and know there is a forward who is going to attack it.

“It’s good to have a bit of height in both boxes as Celtic have looked a bit susceptible at set-pieces – while not looking like scoring from their own set-plays in general.” 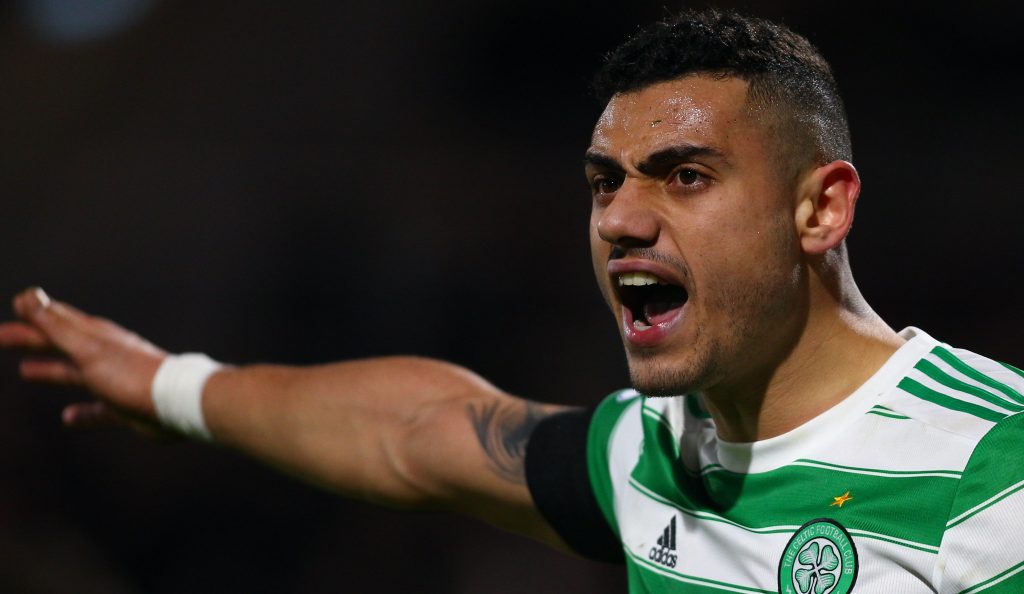 IN WITH A SHOUT…Giorgos Giakoumakis was a big noise at Tynecastle.

Sutton, speaking to the Daily Record, added: “There is a big opportunity for Giakoumakis now with Kyogo seemingly out long term and he could become a key player for Celtic after being a forgotten man a few months ago.

“A fair few players in the squad will need to step up with so many important men out.

“The loss of Callum McGregor is huge. He makes Celtic tick and Postecoglou can only hope he’s not going to be missing for the long term.

“The manager likes to be a bit cryptic when it comes to injuries and I wouldn’t be surprised to see him facing Rangers next week.

“Celtic can’t think about that game right now, though – they have to completely ignore it.

“I know it’s easier said than done when it comes to the supporters, but the team simply has to park it because it’s essential they take maximum points against Dundee United today.

“I don’t think the Glasgow derby will decide the title at this stage, but there’s no doubt a Celtic defeat would make it a tougher task to haul Rangers in.

“However, points dropped to Dundee United would crank up the pressure so they can’t take their eye off the ball this afternoon.

“I don’t think they will, though. It’s been a pretty solid return from the January break for Celtic.

“They survived against Barry Ferguson’s Alloa men and then toughed it out at Tynecastle. The win the other night was massive.

“Celtic still have a tendency to run out of legs towards the end of games the way they play and it can leave them hanging on a touch. 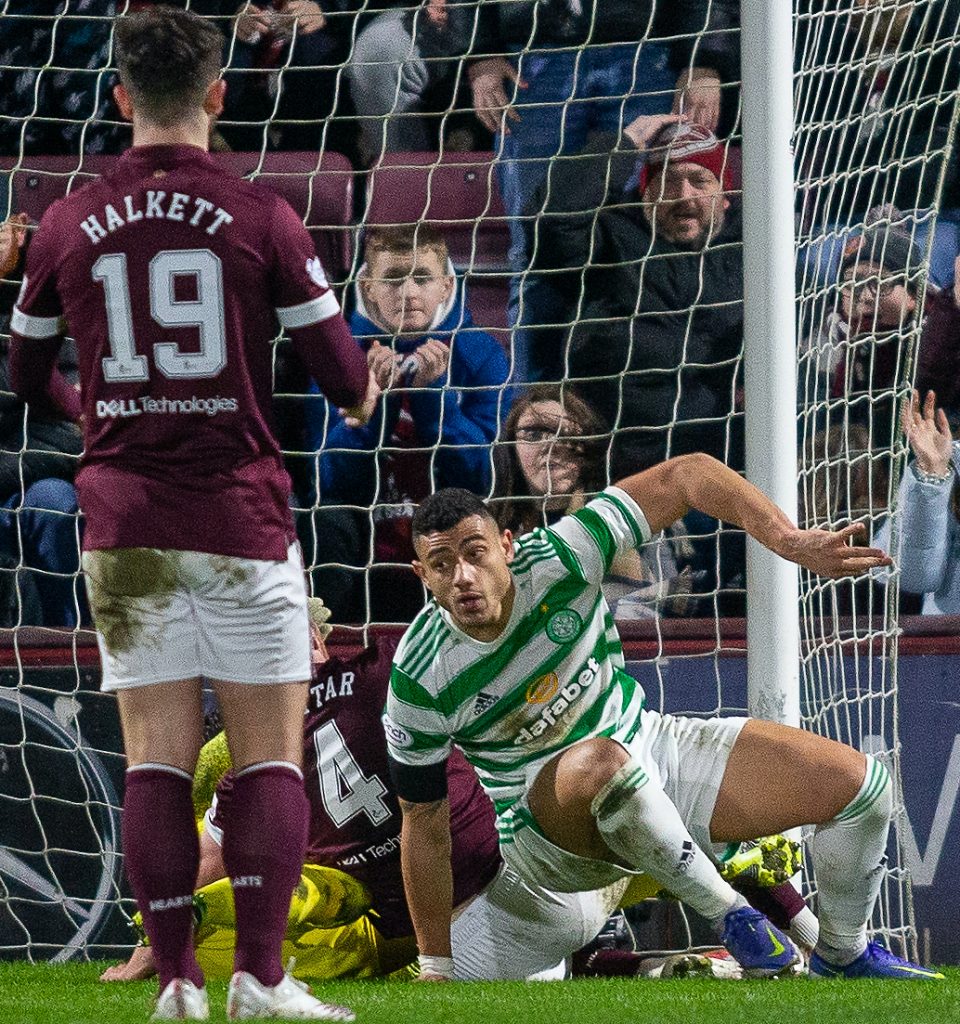 CAPITAL PUNISHMENT…Giorgos Giakoumakis turns away in triumph after netting the matchwinner against Hearts.

“But that will change when everyone is fit and there is more competition for places as there will be stronger options from the bench.

“They probably should have been out of sight by the time Hearts mounted their fightback.

“It’s just a case of being a bit more ruthless in putting games to bed, but there’s a sense someone is going to be on the end of a doing at some point.

“But it said a lot about the character of the team to withstand the pressure in the capital and get the result.”

Celtic go into action again today with the impressive Matt O’Riley likely to make his Parkhead debut while Reo Hatate, scorer of the first goal at Tynecastle, is poised to play his second game in the east end of Glasgow.
The goalscoring onus will once more fall on the shoulders of Giakoumakis against the Tayside outfit who snatch a point in the fixture in September when they came back from a Liel Abada strike to earn a 1-1 stalemate.
* DON’T miss the unbeatable match report from Celtic v Dundee United this afternoon – only in your champion CQN.
Click Here for Comments >
Share. Twitter Facebook Google+ Pinterest LinkedIn Tumblr Email
Previous ArticleNEW BHOY SET FOR PARADISE DEBUT
Next Article Celtic v Dundee United, Live updates