THE TOMMY GEMMELL CSC celebrated its 20th Anniversary last April in Stirling. CQN was there and invited along 3 Lisbon Lions as honoured guests and to participate in a question and answer session which was compered by Brogan Rogan Trevino & Hogan from CQN. The following morning BRTH reflected on the events of the night before. This turned out to be Tommy Gemmell’s last night out with the Celtic supporters. Appropriately enough it was with his own club from his adopted town of Dunblane. Here’s what BRTH wrote  about the night… 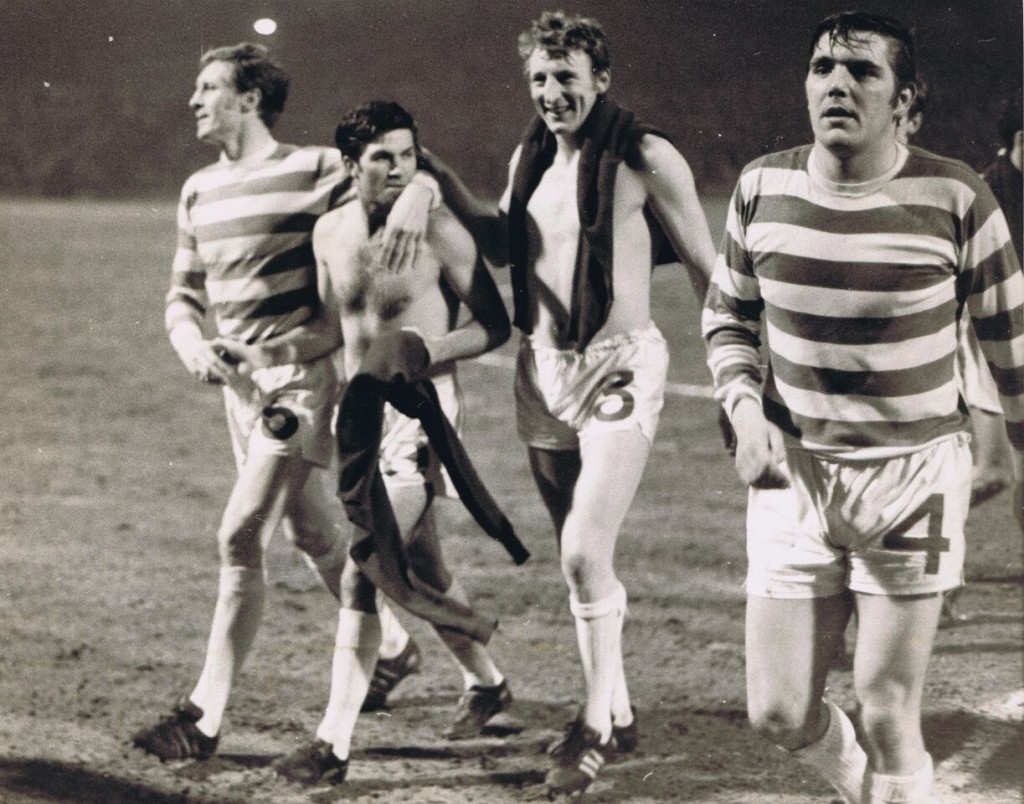 The old man walks on spindly and unsteady legs. He is clearly frail and far from being in the best of health. However, no matter how fragile the body might be, he is about to reveal that the spirit inside that body is fit, is alive, well and as sharp as a Stanley Knife.

“Which was your favourite game for Celtic?” I ask.

A seated Tommy Gemmell takes the microphone and surprises everyone with his answer.

“My favourite game? That would be my first game wearing the hoops — a 4-0 win against Rangers reserves at Ibrox!”

The surprised crowd cheers the answer.

“Did you score Tommy?” I ask into the mic

The frail oul fella leans forward into the microphone to deliver his answer:

The assembled crowd erupt into peels of laughter as the old man’s eyes glint with bedevilment.

Sitting next to him to his right, a much stronger John Hughes buries his head in his hands at the answer, and when the head comes out of those hands, he simply looks at his former team mate and shakes his head.

Soon enough it will be the turn of a forthright and blunt Yogi to have his say:

“What do I think of this current Celtic team and Celtic’s policy of selling their best players?” he repeats into the microphone ” Their rubbish. The worst Celtic team I have ever seen. Whose going to pay top dollar for any of that lot?” he asks ” Baillieston Juniors?”

Again the crowd fall about.

Further on from Yogi sits a spritlely Charlie Gallagher. As I am asking questions first of Tommy, then of Yogi and finally of Charlie, there are a couple of occasions when Charlie simply says ” The boys have already answered that” before continuing to add just a little more.

On this occasion the question is about the forthcoming Scottish Cup Semi final against the team from Ibrox.

“I agree with Tommy and Yogi” says Charlie ” They are a horrible arrogant football club. The worst imaginable. I don’t care if they are the new Rangers, the old Rangers or any other kind of Rangers I want any Celtic team to beat them off the park. Give them a drubbing – a real doing.”

Charlie describes how he considers himself an Irishman and how he was proud to be the first Scots born player to be capped for the Republic of Ireland and how he was booed by the Ibrox fans first for being a Celtic player and even more so for being an international representative of the Republic.

“Made no difference to me” he says ” I was proud to play for the Republic and I couldn’t care less what they think. I have no time for those people. Never had – Never will.”

Between them, these three elderly men pulled on the hooped jersey well over a thousand times during a period when Celtic were at their zenith. All three provided exactly the same answer when asked what was the greatest disappointment in their Footballing career.

” Leaving Celtic” – those exact two words fell from each of their lips and each one then proceeded to “give it staright” to their former manager.

” Why did I leave?” asks Tommy with mock indignation ” I can sum that up in one word: Stein!” 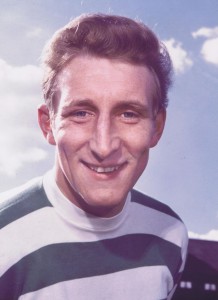 There was no references to Big Jock or Mr Stein or the boss. Throughout the night the legendary Celtic manager is referred to repeatedly as “Stein.”

“Stein sacked me” says Charlie ” I wasn’t consulted by him or anyone else about a transfer I was just told. I was once “sent” and I mean “sent” with my wife down to England on a train – I wan’t even told which club I was meant to be going to and just told what station to get off at and that I would be met by someone in a car. I was taken to the ground and sat in an office for two hours then I left again. When I walked back into Celtic park Stein asked me ” Did you sign?” — I said to him “You never told me to sign — anyway I don’t want to go to England so, no, I didn’t sign!” — I am not too sure he ever spoke to me again and I went to Dumbarton and that was that. I was 29 years old. Hardly too old to be playing football!”

Tommy Gemmel was 28 years old when he was sold to Nottingham Forrest, exactly the same age as Hughes was when he was shipped out to Crystal Palace. Both are quite clear that they never wanted to leave Celtic Park and that they both had a lot left to give the club.

“Stein wanted to break up the team” says Gemmell ” He sold all of us quite deliberately and after that Celtic were not just quite the force we were. Jimmy went to Sheffield United way too early. Bobby Murdoch to Middlesborough. Bertie to Hibs. Cairney to Motherwell. Willie and Yogi to Crystal Palace. Had we stayed on and played longer with the younger players — could we have equalled the feats of Ajax and Bayern Munich and won more European Cups? Who knows? All we will ever know is that we didn’t …….. and Stein didn’t want to give us the chance after Feyenoord.”

All three are unanimous that Wee Jimmy was the best player they played with – George Best gets the shout as the most skillful they played against.

All three make it plain they loved playing for Celtic — really loved it and were proud to do it. All three hated leaving, the way they left and, to be honest, the man who made them leave for reasons that none of them agreed with and in a manner which they find disgraceful and offensive.

They are blunt and brutal in assessing the current squad, but bristle at the very notion of discussing any idea of a replacement of the current manager, though they hardly hide their contempt for the style of football on offer under his stewardship.

” I was a fan of the forward pass” says Charlie ” Ronny wouldn’t have played me and that is a fact” — a powerful running Yogi and a right footed left back who had a tendency to come in from the side of the pitch and shoot ( he scored 12 goals from 54 European appearances ) are not certain to feature in the current system either.

These men are not full of their own importance and what comes over is their belief in football and a love of the club they once played for, though they are scathing in terms of certain aspects of that club’s management both then and now.

The three played with and against the best in the game at the time. They themselves were amongst the best that Europe had to offer at the time and were part of a group of players who changed football completely. They are funny, very funny at times, and completely confident in where each of them stand in the pantheon of Celtic players and of their place in Celtic’s history.

The atmosphere in the room is full of fun as they, along with Tosh McKinlay sitting at the side, crack their funnies and tell their stories. Tosh says he wanted to become a footballer, and achieved his dream, because of the three men seated near the stage. He describes how his father talked in awe about the left peg of Charlie Gallagher, the running of Yogi and the cannonball shot of the one and only “Big Shot”.

Tosh is very funny when it comes to talking about the money he could have earned had he gone to England:

” I made enough money in football to last me a lifetime………. provided I die next Tuesday” and warns the audience “For so long as you guys keep paying for Sky, English Football will pay ridiculous wages and Celtic will struggle in comparison.”

He too just wanted to play for Celtic. That was the height of his career, the summit of his dreams.

As I drive home at one in the morning I think of the answers and comments provided by the three Lisbon Lions. They are old men now. Their youth is gone, but all three showed a sharpness of mind which showed that within the ageing bodies there lies a fierce pride in what they achieved and an equally fierce disappointment in what they were denied achieving.

Similarly, there is an unhidden disappointment in the quality of football currently on offer and in the current state of football in general and Celtic Football Club in particular.

For whatever reason, as I sit in the car the words of Dylan Thomas come to mind:

Do not go gentle into that good night,
Old age should burn and rage at close of day;
Rage, rage against the dying of the light.

Though wise men at their end know dark is right,
Because their words had forked no lightning they
Do not go gentle into that good night.

Good men, the last wave by, crying how bright
Their frail deeds might have danced in a green bay,
Rage, rage against the dying of the light.

There is no chance of those three going gentle into that good night.

Once I am in bed I turn my radio on to Radio 5 Live.

Dutton Adebayo is discussing European Football with Tim Vickery and some others and the topic of discussion is Alfredo Di Stefano.

Inevitably with Vickery the chat switches to Celtic and Lisbon 67 and this prompts a call from Frank who is a Celtic supporter of many years and who takes the time to call in at 3:00am to stress how great the Lisbon Lions were and how they changed football for the better, how they brought back the beautiful game full of attacking football, how the Celtic fans invaded Lisbon with a smile, how Celtic are a club of the people and for the people – full of love and charity and things that are worthwhile in life as well a on the football pitch. 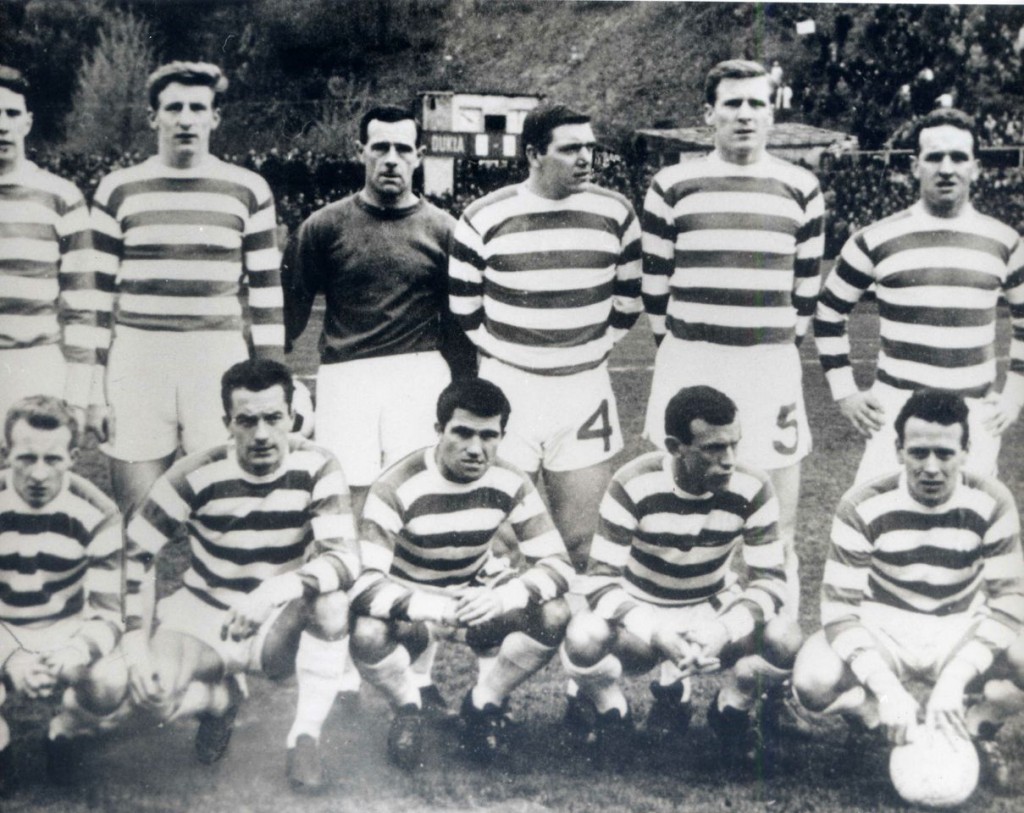 Frank ends with the story of when Barcelona FC paraded the Champions League trophy through the streets of ther native City after defeating Juventus 3-1 in the 2015 final, their open topped bus had to drive by a huge banner which read:

“Barcelona FC 2015 – we are now the true successors to the Lisbon Lions of Glasgow Celtic: Lisbon 1967”

In the 2015 final Barcelona successfully completed 505 passes of the football out of 570 attempted, enjoyed 61% possession and had 18 attempts on goal.

I lie in the dark and hear Charlie Gallagher, who didn’t make the team in Lisbon, but whose cross for big Billy to head home against Vojvodina meant that Lisbon was possible.

“I was a fan of the forward pass”

Do not go gentle into that good night,
Old age should burn and rage at close of day;

*The Tommy Gemmell Dunblane CSC will by at the front of Celtic park at 11.30am to leave our tribute and pay our respects to Tommy, a great friend of many of the folk on the bus today. 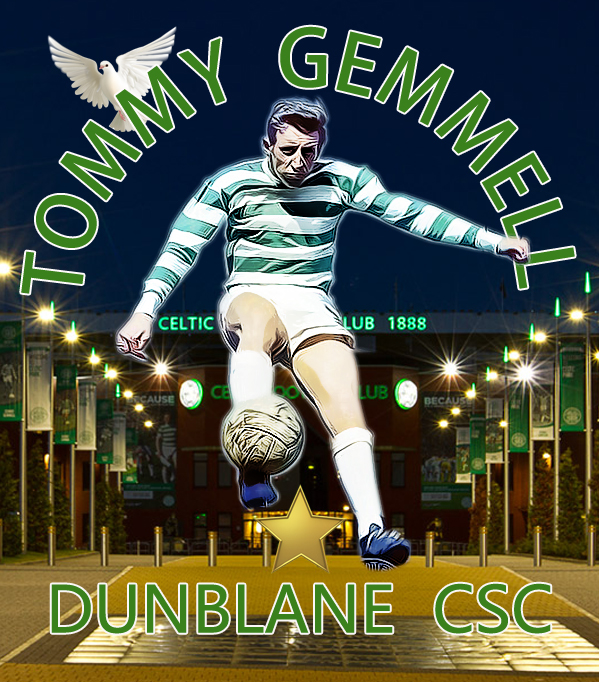