KRISTOFFER AJER celebrated his fifth anniversary at Celtic with a Man of the Match performance in the hard-fought 1-0 win over Aberdeen at Parkhead last night.

The towering Norwegian defender, who was bought by his fellow-countryman Ronny Deila for a bargain £750,000 from FK Start, was outstanding as the Hoops racked up their fifth successive win courtesy of a blistering long-range strike from David Turnbull in the 15th minute.

The modest Ajer spread the acclaim among his team-mates who were made to battle as the Dons fought to escape unwanted history as they became the first Pittodrie club to go six competitive games without scoring a goal.

There was a flurry in the champions’ penalty box right at the end when Scott Bain had to display courage and swift reflexes to go down at the feet of Lewis Ferguson to grab the ball just a few feet from the line.

The incident sparked a melee with Ajer attempting to protect his keeper and referee Alan Muir restored order by granting a free-kick to the hosts.

The versatile 23-year-old international star, speaking to Celtic TV, said: “We knew before the game that Aberdeen would make it extremely difficult. 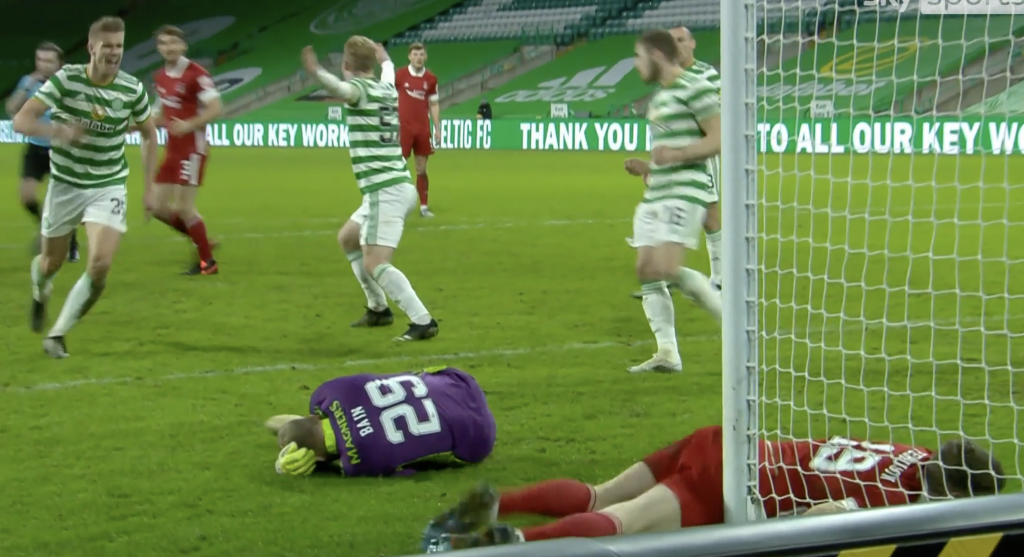 IN WITH A SHOUT…Kristoffer Ajer yells in protest after Scott Bain’s late save at the feet of the grounded Lewis Ferguson.

“At the end it felt like there were 25 Aberdeen players in the box!

“However, we defended well and I’m extremely delighted about that. They pressed us really well in the second-half and came out with a great spirit.

“We didn’t manage to play them out and we had to grind out the result, but the full-backs defended great and the guys in front of us worked their socks off, so it was good.”

Ajer also paid tribute to shotstopper Bain for his part in the game’s only goal when Callum McGregor carried the ball over the halfway line before passing at the absolute right moment for Turnbull to lash an unstoppable drive low past the despairing Joe Lewis at his right-hand post.

He added: “It’s easy to look at David’s great strike and Callum’s strride with the ball, but it’s important to look at Bainy’s pass.

“If Bainy does not play that pass – with his left foot, as well – then there is no goal. His ball to find Callum in midfield was incredible.”

Now the Hoops look to Dingwall for Sunday’s 7.30pm kick-off in their bid for six in a row after adding Derek McInnes’ side to Kilmarnock, Motherwell, St Mirren and St Johnstone in their winning sequence that has offered glimpses of what Celtic fans anticpated back in the summer.

Now Ross County, beaten 5-0 on their own patch by the Parkhead men in September, are next in line for the Hoops backlash.