Celtic Quick News on News Now
You are at:Home»Latest News»UP AND HATEM: CELT AIMS TO MAKE UP FOR LOST TIME
By CQN Magazine on 19th June 2020 Latest News

HATEM ABD ELHAMED is a happy Bhoy, but it must be said the Israeli international defender’s timing could be better.

The 29-year-old right-back joined the club in a £1.2million switch from old European foes Hapoel Be’er Sheva last summer as Neil Lennon scoured the world for a new No.2.

Mikael Lustig and back-up Christian Gamboa both quit the champions at the end of their contracts to spark the search for a reliable replacement.

Lennon ended with an embarrassment of riches for the position after Austrian star Moritz Bauer arrived on a season-long loan from Stoke City and Dutch teen sensation Jermie Frimpong made a spectacular introduction to the Hoops after his deadline-day arrival from Manchester City.

Elhamed was entrusted with the jersey for the match against Serie A cracks Lazio in the Europa League Group B encounter in Rome in November.

The Parkhead men enjoyed a historic 2-1 triumph – their first in Italy in 13 attempts – but the Israeli ace was forced to limp off with a hamstring strain in the second-half.

The injury kept him on the sidelines for a few weeks while Frimpong took over and was a revelation in the position. 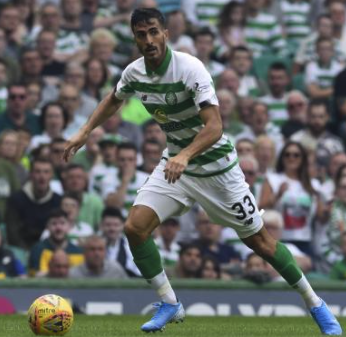 ON THE RUN…Hatem Abd Elhamed surges into attack.

Elhamed, who was on the substitutes’ bench for the 1-0 Betfred League Cup Final victory over Steven Gerrard’s Ibrox side at Hampden on December 8, made a rare first-team appearance in 2020 when he played in the 5-0 Premiership win over St Mirren in Glasgow on March 7.

Football went into cold storage six days later due to the cornavirus pandemic and the SPFL eventually awarded the champions with their ninth successive title after they had led the league by 13 points with only eight games to go.

The cultured back-four operator was delighted to pick up two pieces of silverware in his debut campaign at Parkhead and, speaking to Celtic TV, admitted: “Getting injured in the Lazio game was a frustrating moment for me, especially after a very good game.

“I was confident that I would keep going from there and continue to achieve my goal, but that injury stopped me for more than four months.

“The Lazio game was a special night, though, especially with the Celtic fans, over 10,000 of them, away in Rome. That was very exciting. To win the game with Olly’s goal in the 95th minute, it was very special.

“I came back in for the St Mirren game before the football was postponed. I wanted to keep playing and to keep getting more game time. But the coronavirus stopped everything. That wasn’t ideal, but now I feel fit and I’m ready to go for this season.”

Elhamed is currently training with his colleagues at Lennoxtown as Lennon’s men prepare for their tilt at ten. 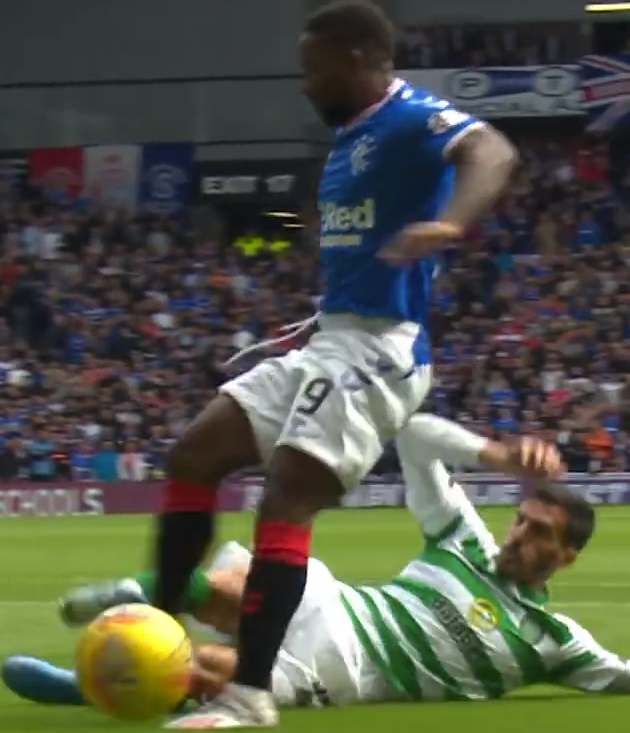 NICK OF TIME…Hatem Abd Elhamed slides in to rob Jermain Defoe in the Hoops’ 2-0 win at Ibrox.

He added: “I’m really happy to be back with my team-mates and to start pre-season training. And I’m also happy that we won the championship – we’re all happy about that and we are now looking forward to the season ahead.

“I was in Israel with my family when I heard we were crowned champions. It was a very special moment for me. With this type of achievement, you’d like to celebrate with your team-mates and with the fans, but the situation with the coronavirus, has made things different. Instead, it was nice to celebrate it with my family.

“It was great to win the league and the League Cup, so to win two trophies with Celtic in my first season was great.

“Obviously, I was injured for some time, which meant I missed out on a number of matches, but I’m happy to be have been part of things.”

The duel between Elhamed and Frimpong, 12 years his junior, for the right-back berth will be an intriguing one.

One thing is certain – it won’t be dull in the east end of Glasgow when the new Premiership season kicks off on August 1.