BRENDAN RODGERS admitted Celtic were missing a creative spark and a cutting edge in their goalless draw against Motherwell at Fir Park this afternoon.

The stalemate left the champions 10 points clear at the top of the Premiership going into the international break.

The champions couldn’t break down a resolute Well defence with the team playing the entire second-half with 10 men following Cedric Kipre sending-off after an off-the-ball incident with Scott Brown.

Rodgers said: “I thought it was pretty even in the first period of the game. Scott Bain had to make a couple of good saves and we had some moments of danger around our box.

“The guy gets sent off so it changes the dynamic of the game. I was pleased how we worked the ball and our positioning – we stayed really calm, didn’t force it and we just needed to wait for the moments to arrive in good positions.

“I thought we did that, but we just lacked that bit of incisive play to score. We obviously couldn’t get the goal and that was the only disappointment, really. It’s always going to be a tough game here.” 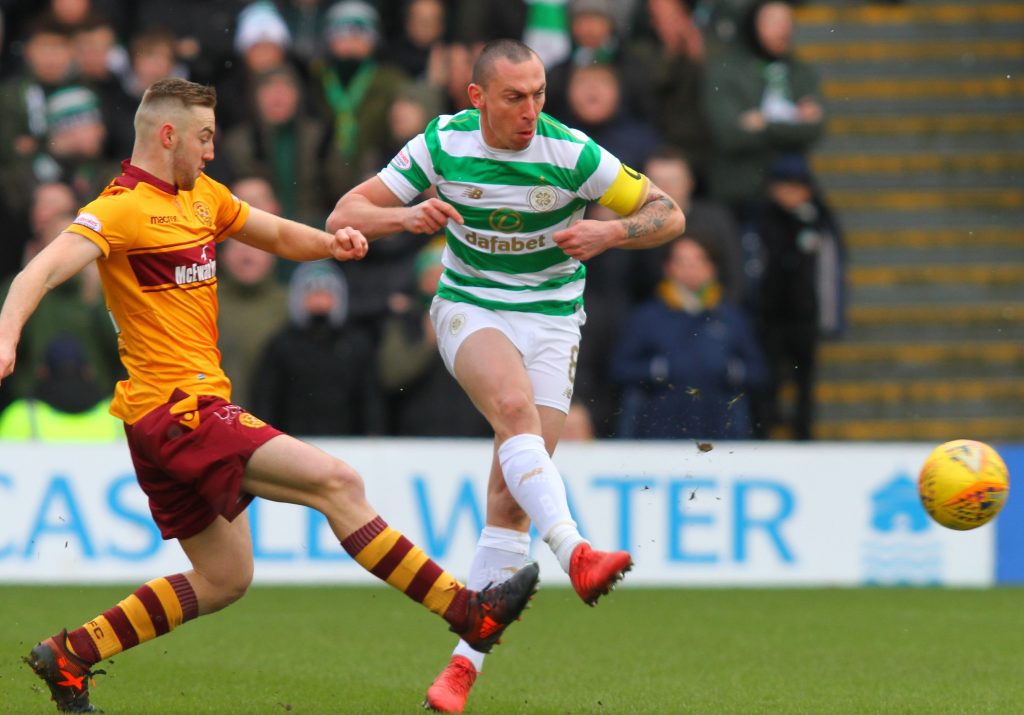 IN THE THICK OF THE ACTION…Celtic skipper Scott Brown in a duel for the ball with Motherwell defender Allan Campbell.

On the red card, Rodgers said: “The only thing I would say is that referee Craig Thomson is looking at it.

“By the time the incident happens, he’s right up level and looking in at it.

“If he throws a punch and it doesn’t hit, does that mean it’s not right?  So maybe that’s what Craig has seen. He has gone to lash out and caught Broony a little bit, not what people would expect for him to be sent off, but Craig must have been looking at the intent.

“That changes the game. They go to 4-4-1 and they stay solid, do well and defend. We had a couple of moments – we hit the bar, Scott Sinclair was in a one-v-one – but it just wouldn’t fall for us and that’s just sometimes the way it goes.

“And, nowadays, you’re at an advantage, I hear, when you have 10 men. So we did really well in that moment.”

The Hoops manager, of course, was referring to comments made by ex-Ibrox skipper Barry Ferguson last week that Rodgers and his team got a slice of luck when Jozo Simunovic was sent off in the champions’ 3-2 win in Govan a week ago.