Celtic Quick News on News Now
You are at:Home»Latest News»BAIN SPELLS OUT WHAT EURO SUCCESS MEANS TO HOOPS
By CQN Magazine on 21st July 2019 Latest News

SCOTT BAIN insists reaching the Champions League group stages will be like a Cup win for Celtic.

The Hoops keeper believes reaching the money-spinning sections of Europe’s elite tournament is a MUST after missing out in the last campaign.

Scotland’s title kings were favourites to achieve three successive qualifications to Europe’s highest stage, but they were derailed by AEK Athens after drawing 1-1 in Glasgow and crashing 2-1 in the Greek capital.

Bain wasn’t exactly overworked as Neil Lennon’s men breezed past FK Sarajevo on a 5-2 aggregate scoreline in the opening qualifier and the 27-year-old international is in line to face Estonia’s Nomme Kalju on Wednesday at the second hurdle with another two still to be negotiated if the Parkhead outfit are to reach their Euro target.

The former Dundee No.1 also looked back to February’s two clashes against Valencia in the last 32 of the Europa League and admitted it was a learning curve as the team lost 2-0 in Glasgow and 1-0 in Spain after Jeremy Toljan had been red-carded in the first-half.

Bain, speaking to the Sunday Mail, said: “It would be amazing to do that. Celtic want to be at that level. 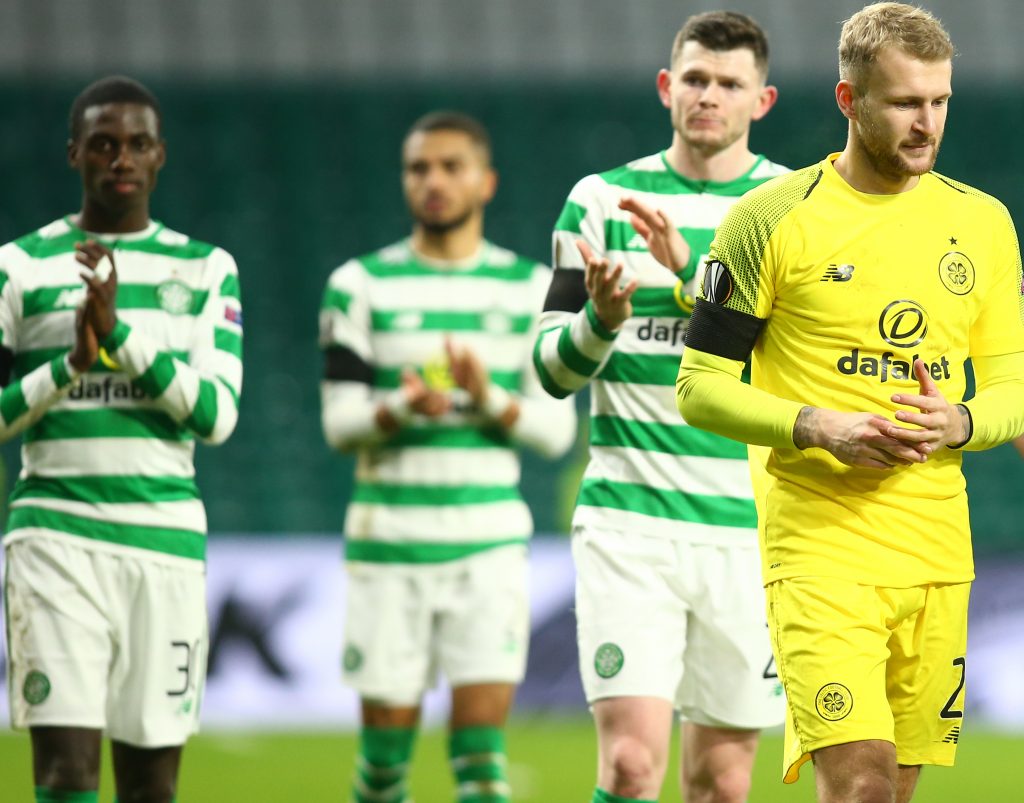 LONE CELT…Scott Bain comes off the Parkhead pitch after the 2-0 loss to Valencia in February accompanied by Timothy Weah, Jeremy Toljan and Oliver Burke. Amazingly, he is in the only player still at the Hoops with the trio returning to their clubs after temporary deals.

“As players, we want to show we can perform at Champions League level and get all the accolades we’ll deserve.

“It’s massive for Celtic. But we’ve a long way to go in the qualifiers and it’s a long route to get there. If we can then  it would be like  winning another Cup.

“That’s how the players look at  Champions League qualification. We need it and want it.

“And we’ll play more games to get into the group stage than we’d do to win a Cup in Scotland. So, it’s a good aim for us, going into every one of these games like it’s a Final. We’ve got lads here who have achieved it before and know how to do it.

“It’s a case of taking their experience, as well as the manager’s, and hopefully going all the way.

“When I was at Dundee I wasn’t thinking about one day playing in the Champions League. But now I’m here and I’ve got that opportunity.

“When we played Valencia in the Europa League last season it felt like we were up against a Champions League side given the money they pay for players.

“Yet we performed excellently,  especially in Spain. We take confidence from that, even in defeat.

“They were a top side, so it was a good learning curve and I’m proud I’ve played against that standard of opposition.”