RYAN CHRISTIE has the ability to gatecrash the Celtic first team this season, that’s the verdict of midfield mate Callum McGregor.

The 23-year-old Highlander has made six appearances for the Hoops this season after spending the last 18 months on loan at Aberdeen.

Christie went on record admitting he believed the deadline day exit of Moussa Dembele could be good news for him and his aspirations to stake a place in Brendan Rodgers’ top side, as CQN reported earlier this month.

The cultured Scotland international playmaker is in the final year of his Hoops contract and it’s make-or-break time for his hopes to become a key man at the champions.

McGregor, 25, insisted: “Ryan has fantastic ability and you’ve seen the tremendous impact he has made when he has come off the bench in our last couple of games. The manager likes him, as well.

“Technically, he is at the top level and Moussa’s departure has created a big opportunity for him.

“Ryan has all the skill in the world, he’s a good kid and works really hard at training every day. I don’t see any reason why he can’t do well for us. 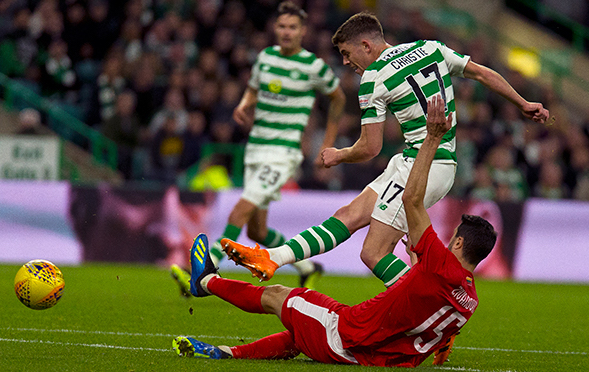 “It’s sometimes just about being patient, waiting for your chance and then taking it. Our squad has been really strong in the last few years and Ryan was probably just outside that.

“Whenever he did train or play with us, he was still at a really high level.

“He was just unfortunate that guys such as Moussa were doing so well, but, with the big man gone, I’m sure he’ll take full advantage of that now.”

Christie arrived at the club from Inverness Caley Thistle in the summer of 2015 and was loaned back to the Highlanders by Ronny Deila.

He made 15 appearances before switching to Pittodrie on a temporary transfer for a season-and-a-half and Dons boss Derek McInnes was keen to make the move permanent in the summer.

However, Rodgers resisted the temptation to allow Christie to quit the champions and the ball is now at the talented feet of the youngster.