Celtic Quick News on News Now
You are at:Home»Latest News»BROONY ON THE BRINK
By CQN Magazine on 13th March 2021 Latest News

SCOTT BROWN is on the brink of being offered a one-year extension by Celtic.

The Hoops skipper, who will be 36 in June, is out of contract at the end of a turbulent season and has been targeted by Aberdeen as No.2 to potential new boss Stephen Glass, as CQN reported yesterday.

However, the Parkhead hierarchy believe Brown still has a role to play at the club in the forthcoming campaign where there will be an upheaval of staff on and off the field.

The former Scotland international powerhouse has already stated he believes he is “too young” to concentrate on coaching at the moment and is determined to carry on playing. 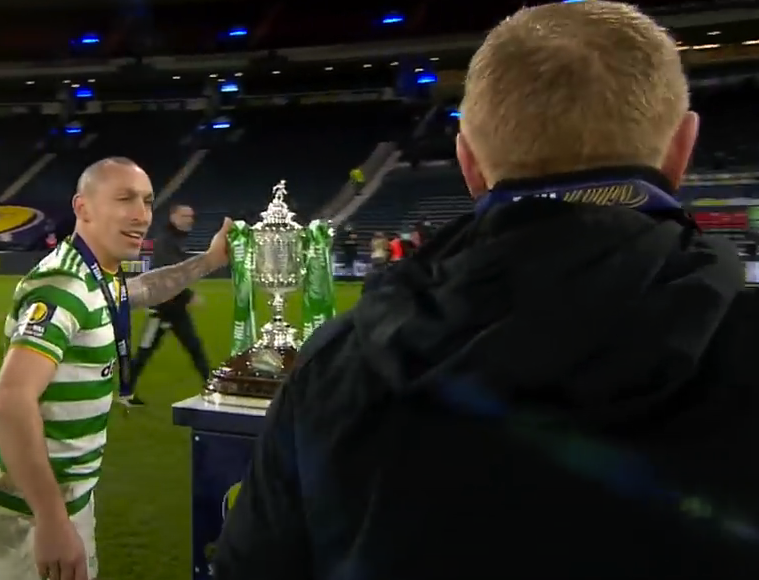 THIS IS FOR YOU, BOSS…Scott Brown with the Scottish Cup as Neil Lenon looks on.

The inspirational nine-in-a-row leader has had to put his career on hold while Celtic sort out their managerial position following the departure of Neil Lennon last month. John Kennedy has been put in interim charge until the end of the term and Brown may wait until there is a full-time appointment before making a commitment, according to the Daily Record.

The club warhorse, who has won 22 honours after joining from Hibs in 2007, is under pressure to hold onto his anchorman role with Ivorian prospect Ismaila Soro pushing for regular first-team appearances.

Brown and Glass have been friends since their playing days at the Easter Road outfit and the Pittodrie club are hoping to announce their new gaffer this month following Monday’s exit of Derek McInnes who had been in the hot seat for eight years.