The 32-year-old midfielder’s international career appears to be in limbo with the SFA’s decision not to renew Gordon Strachan’s contract on the back of two failures to qualify for the Euro Championships and next summer’s World Cup Finals.

Scotland have arranged a friendly with Holland at Pittodrie next month, but Brown has yet to decide if he will be available.

The Hoops star, who led the club to next month’s Betfred League Cup Final after yesterday’s 4-2 success over Hibs, wants to discuss his plans with the caretaker gaffer in the next 48 hours.

Brown said: “I am going to speak to Malky in the next couple of days and see how it goes.

“I have spoken to the manager and he spoke to Malky. I am now going to have a chat. We will see what happens.”

Brown admitted he is unhappy at the removal of Strachan, who paid a Scottish record £4.4million to buy him from Hibs during his days in charge of the Parkhead outfit 10 years ago.

The national side were unbeaten in six games in 2017, but the 2-2 draw in Slovenia scuppered any chance of a play-off place.

Brown revealed the SFA didn’t ask the skipper for his view and he said: “I was very disappointed to see Gordon go.

“If any manager comes in and gets 14 points out of 18, they could get the sack from Scotland these days.

“It’s a hard one to take. Gordon has been great with me throughout my career and will continue to be.

“I will keep in contact and I’m just sad to see him go.

“Did the SFA speak to me before the decision? No. I didn’t expect them to.”

On yesterday’s Hampden experience, Brown said: “It was always going to be tough for us against Hibs.

“Lenny had them fired up and they mixed it up – pressing and then sitting off.

“It was a good game overall, but in the first-half we kept the ball and used our spare man in midfield.

“Craig Gordon’s passing from the back was brilliant and that is how we like to play football.

“It was never going to be like that for the whole game, though.

“They changed shape and got a little bit of luck for the penalty. However, we deserved it overall.”

Celtic made it 60 domestic games without defeat and the captain insisted they are not done yet.

He added: “It’s not just that record that is keep us going, it’s the manager’s high demands and the pressure the boys are putting on each other.

“There is competition for places and you see people coming off the bench, scoring goals and keeping the ball. 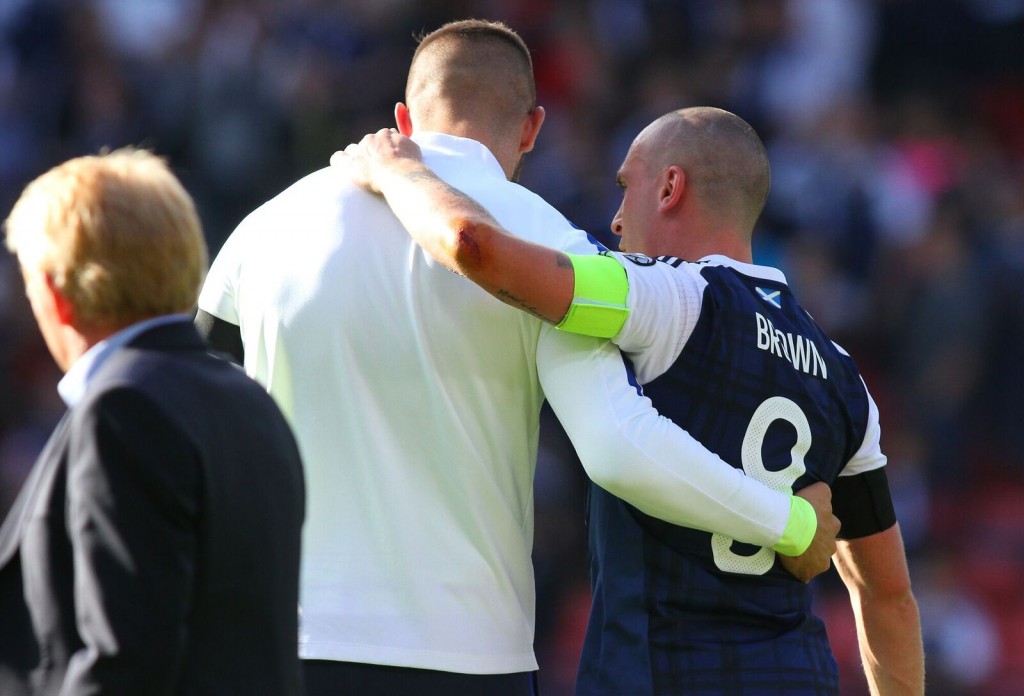 “It’s great to have that squad. The gaffer can make a couple of changes and freshen things up.

“It is a great record. We have a manager who believes in us and we believe in him.

“”We are all enjoying our football. It’s only people on the outside who are putting pressure on us about the unbeaten run.

“Sometimes the fans get a fright with the way we play the ball from the back, but that’s how the manager wants us to play.

“We want to play that way, too. We don’t want to be an ugly football team. We want to be a dominant force at Scotland and Europe.”

The Hoops face a tough trip to Aberdeen on Wednesday and Brown admitted: “It’s always hard going up there. Derek McInnes will have Aberdeen fired up and they will try put us under pressure.

“They will try to squeeze us, but we will keep doing what we do – play football.

“We beat them six times last season. But it’s a fresh start. They have some new players and it will be a good game.”