Celtic Quick News on News Now
You are at:Home»Match Report»CELTIC 5 HEARTS 0 : TEN-SHUN: HERE WE GO FOR NINE IN A ROW
By CQN Magazine on 12th February 2020 Match Report

CELTIC raced TEN points ahead in their bid for a magical ninth successive title as they enjoyed a five-goal romp against the Edinburgh side at the same time Steven Gerrard watched in dismay as the pretenders collapsed 2-1 at Kilmarnock.

The champions made no mistake as goals from Olivier Ntcham, Christopher Jullien, Callum McGregor, Ryan Christie and Jozo Simunovic hammered the shell-shocked visitors.

Neil Lennon’s men galloped into a double-figure advantage over their nearest challengers on an evening that could prove so pivotal in this season’s battle for the crown.

The Hoops put down a marker in the third minute when Leigh Griffiths snapped at a half-chance, but Craig Halkett was in line to block the effort much to the relief of the Premiership strugglers.

Five minutes later, Greg Taylor raced forward to try his luck, but John Souttar cleared for a corner-kick and Giffiths’ deadball was headed clear by the packed visitors’ defence.

A pattern was already emerging with the champions probing for an early opening against a team equally determined to shut them down as soon as they got into danger areas. 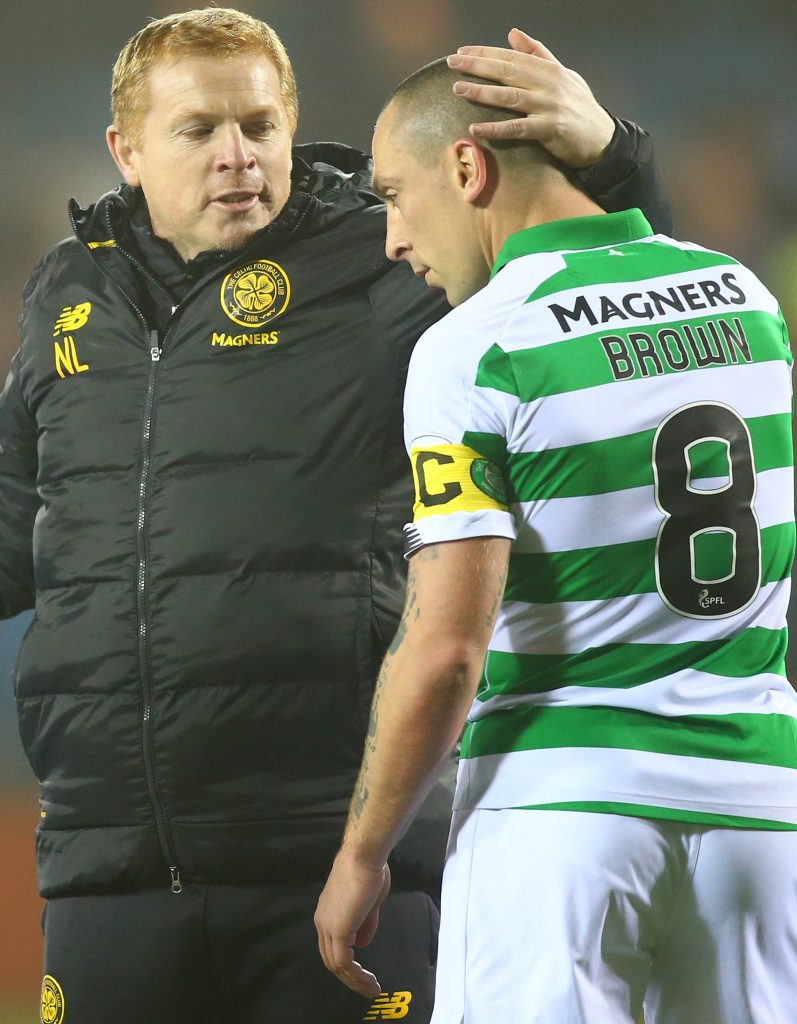 Griffiths looked eager to add to his four goals since the restart of the action following the mid-winter break, but his attempt flew too high and failed to trouble Joel Periera.

In the 15th minute, the Hoops should have taken the lead when both James Forrest and Griffiths squandered good chances. The winger was just too elaborate before unleashing a left-foot shot that was blocked by the keeper. The rebound broke to the comeback striker, but he snatched at the attempt and his shot lacked the oomph and accuracy to worry the Portuguese No.1 who gratefully grabbed the ball to his chest.

Ntcham attempted to show the frontmen how it was done with two quickfire efforts, but Pereira was in the right place at the right time to save the first and the second sailed too high.

Celtic were given a scare in the 28th minute following a yellow card for Simunovic after bringing down Jamie Walker just outside the box.

Ben Garruccio whipped in the resultant free-kick and Fraser Forster had to dive to his right to beat the ball away and it was scrambled for a corner-kick.

However, on the half-hour mark, Parkhead erupted when Ntcham hit the breakthrough goal with a typical opportunistic attempt. 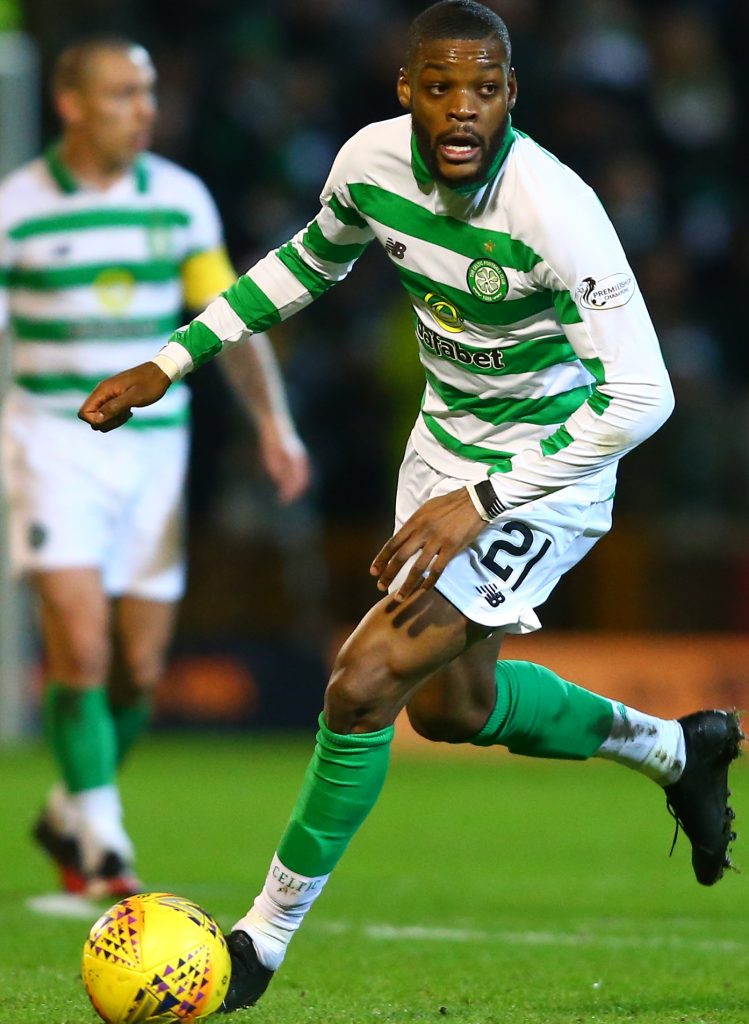 EIGHTH WONDER…Olivier Ntcham hit the opener – No.8 of the season for the Frenchman.

Edouard was at the centre of a counter-attack as he swept away from Souttar before firing in a right-foot drive. Pereira didn’t look comfortable as he pushed the ball away.

It went straight to the lurking Ntcham and he didn’t hesitate as he thumped the rebound into the net from smack in front of goal for his eighth of the campaign.

The home fans sat back in anticipation of a deluge, but, strangely, Lennon’s men appeared to lose momentum and there was a passage of sloppy play that invited Daniel Stendel’s rock-bottom Hearts side back into the contest.

Steven Naismith almost made the Hoops pay when he zipped in a volley from the edge of the box, but it took a nick off a defender and was diverted wide for a corner-kick.

But the Hoops should have doubled their advantage as the game neared the interval. Edouard, yet again, led the charge and he unselfishly squared the ball to Griffiths when he looked in a good position to have a shot himself.

The hitman must have thought he had scored his fifth goal in his seventh game, but he rushed his effort and battered the ball into the sidenet. It should have been on target, at least.

A minute into the second period, and towering centre-back Jullien did the trick with a thundering close-range header after Griffiths has slung in a swirling corner-kick. Pereira elected to stay on his line and by the time he sensed danger it was too late as the ball nestled into the net via the head of the Frenchman. 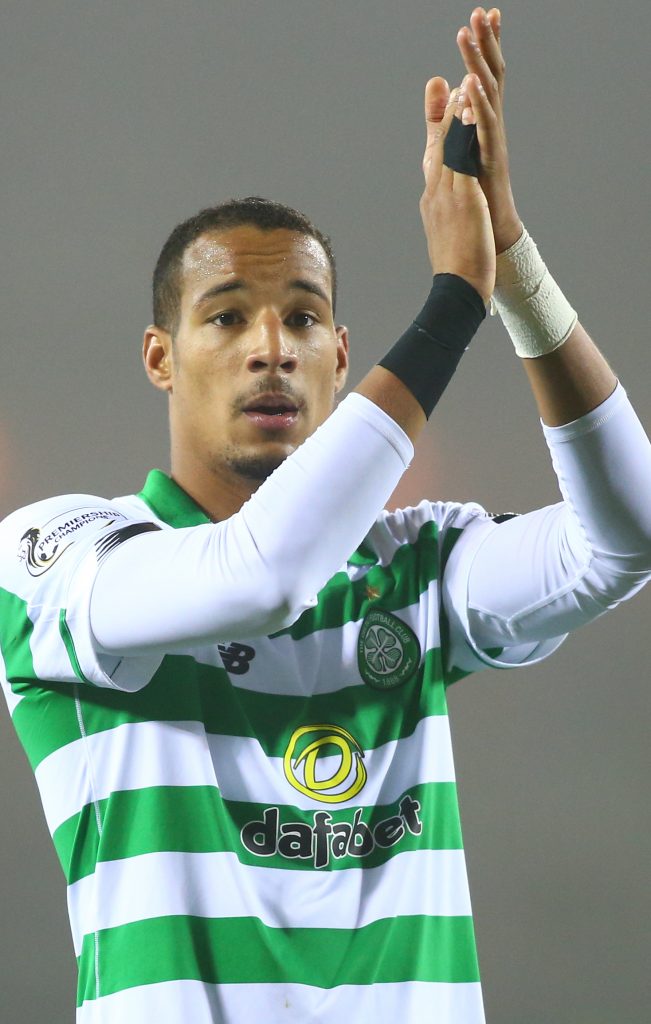 IF YOU’RE HAPPY AND YOU KNOW IT CLAP YOUR HANDS…Christopher Jullien netted the second goal for his seventh of the season.

The keeper then had two large slices of luck following another set-play when Simunovic struck a post and Scott Brown followed up to slam a shot against the same upright.

In the 52nd minute, it was 3-0 when the busy McGregor latched onto a Taylor pass to lash in his 10th strike of the term.

It was all Celtic as they powered forward and the Edinburgh men were totally engulfed in green-and-white raids.

In the 64th minute, Ryan Christie replaced Griffiths – and three minutes later he made it 4-0 with a crisp left-foot shot that zoomed in on target. The playmaker looked delighted with his first strike of 2020 which was also his 19th of a prolific campaign.

Eight minutes later, Lennon made a second change when he sent on Mohamed Elyounoussi for Forrest who had produced another hard-working performance.

And Simunovic got in on the scoring act when he claimed the fifth from close range following a delightful corner-kick from Christie in the 80th minute only moments after Tom Rogic had replaced Ntcham.

Hearts’ sad night was capped with a red card for substitute Marcel Langer for a lunging challenge and reckless challenge on Brown who was fortunate to escape serious injury. Referee Willie Collum had little alternative other than to show the German defender a straight red card.

However, it was an evening of celebration in the east end of Glasgow.

It was a championship-style performance from a team with their focus firmly on nine in a row – and with a manager and players equipped to carry out their promise.