HAIL Celtic Centurian Leigh Griffiths! The striker hit his 100th Hoops goal and, with his usual immaculate timing, it was a strike of immense importance.

The prolific hitman joined the Ton-Up Bhoys with an exquisite free-kick in the crucial Europa League play-off against difficult and stuffy opponents FK Suduva at Parkhead tonight.

Griffiths’ glory moment arrived in the 27th minute much to the joy and relief of the fans and his team-mates. Callum McGregor lost possession in the box and was then hauled down as he tried to retrieve the situation 25 yards out. It was a free-kick without argument.

Olivier Ntcham and Griffiths both stood around the ball as the Bulgarian referee prepared to blow his whistle to signal the go-ahead to take the award. There was only one player going to have the honour of a strike.

With utmost confidence, Griffiths strode forward and nonchalantly swept a left-foot effort over the defensive wall and into keeper Ivan Kardum’s top left-hand corner of his net. 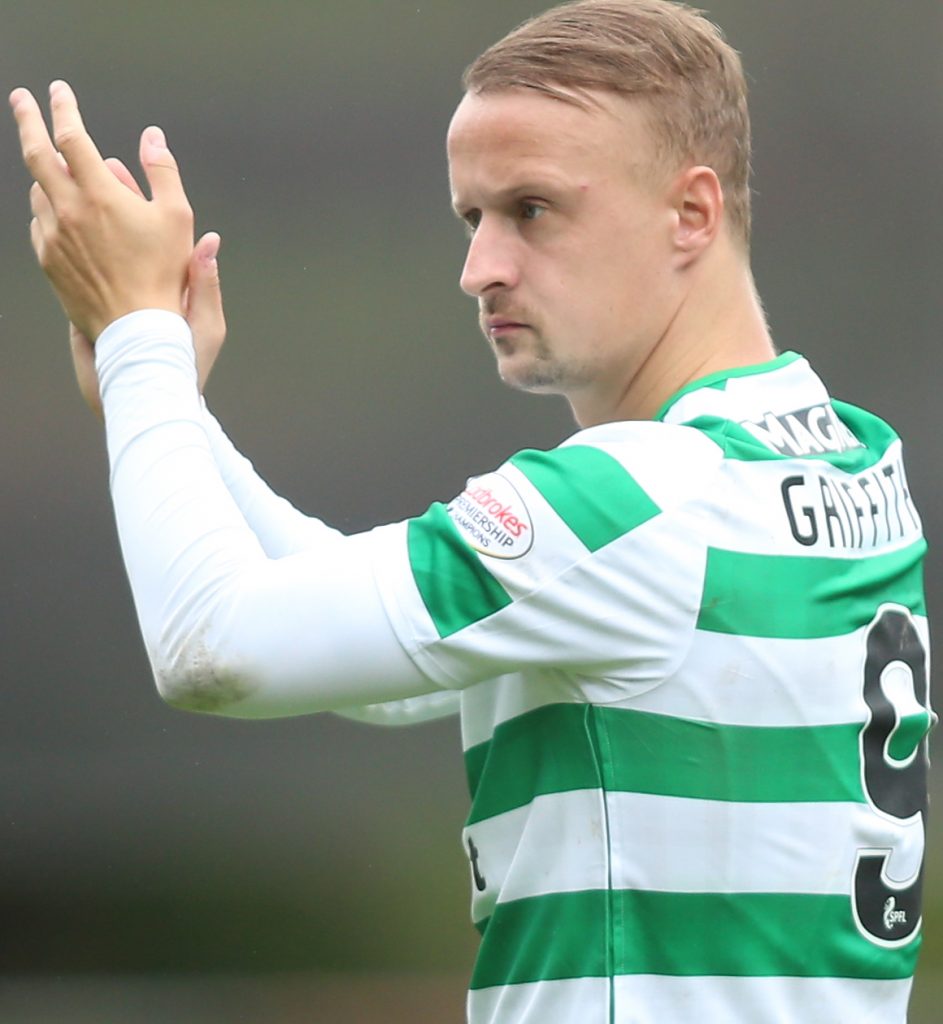 A BIG HAND…for the Century Bhoy! Leigh Griffiths hit the ton against the Lithuanians.

The player immediately raced to embrace Brendan Rodgers on the touchline before his colleagues joined in. It was a nice touch on a special moment for the lively attacker.

McGregor and Kristoffer Ajer joined in the goal parade in the second-half as the champions made certain of their place in tomorrow’s Europa League group stages draw.

In the third minute, Mikey Johnston drifted into midfield before setting up Scott Sinclair on the left. The winger, hoping to add to his solitary goal this season, cut inside to flash in wicked 25-yard drive that hurtled just off target with the keeper scrambling.

Johnston, with James Forrest on the bench, looked lively on the right as he taunted and teased the Lithuanian back lot with some tantalising footwork. He supplemented his skills with two low balls into the box within minutes of each other and both were booted clear by frantic defenders.

Ntcham was in the mood, too, as he patrolled the midfield and the French ace added his weight to attack in the 16th minute, but his ferocious 20-yarder was just too high.

Two minutes later, he brought Sinclair into play with a sweeping crossfield pass and the Englishman’s delivery created panic in the Suduva defence. The ball dropped to the eager Griffiths, but he snatched at the chance and shot straight at a grateful Kardum

However, the raider had different luck nine minutes later when he made personal history with a trademark deadball effort.

It took half-an-hour for the visitors to get their first shot on target and Sandro Gotal’s 25-yarder was well held by Craig Gordon as it dipped viciously in front of him.

A minute later, Dedryck Boyata earned a round of applause after two good challenges and a neat pass to Kieran Tierney. The Belgian then had a baleful look at Mikael Lustig who had gifted possession to the Lithuanians. 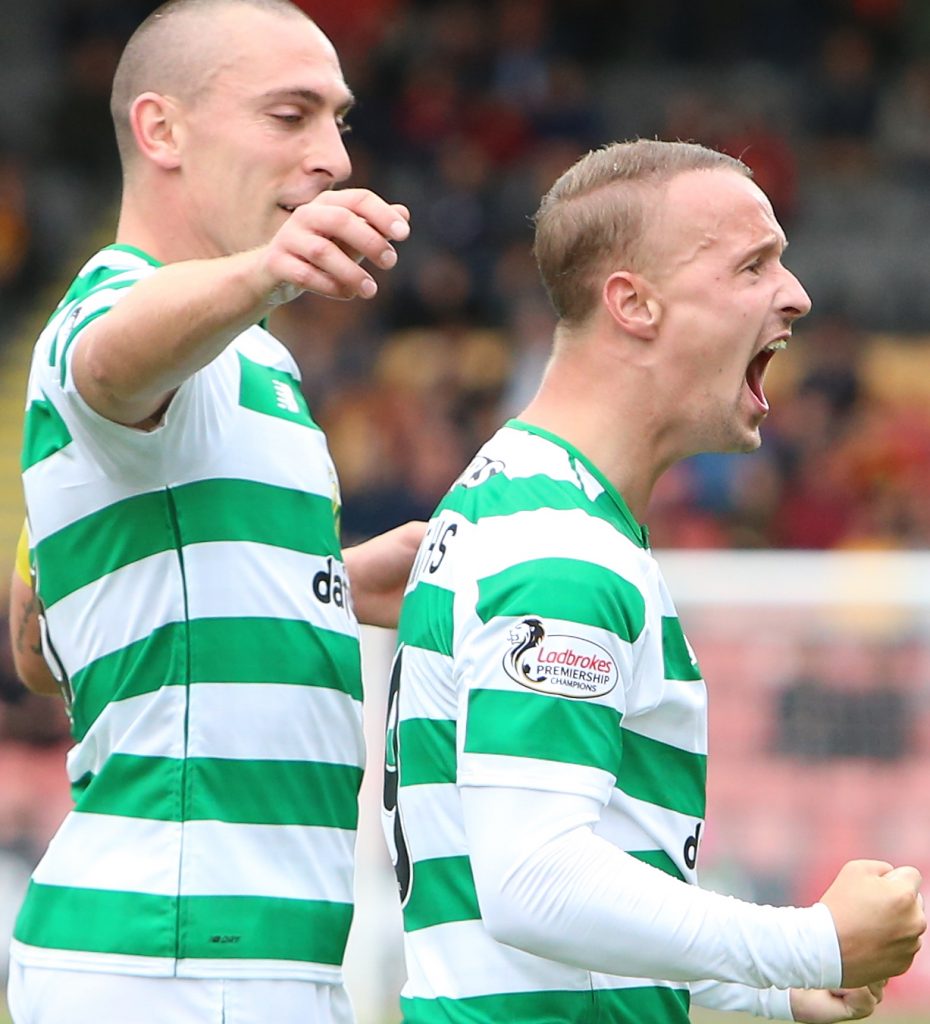 Sinclair passed up a glorious opportunity to double the Hoops’ advantage only moments later. Johnston and Ntcham combined on the right and the French Under-21 star fired a cross into the box.

McGregor threw himself at it and missed as the ball carried on to Sinclair. However, he took a split-second too long in bringing the ball under control and then snapped a shot against the keeper who should have had no chance.

Somehow you got the impression that Sinclair would have buried such an opening two seasons ago.

At least, Griffiths’ landmark goal had coaxed the visitors to abandon their suffocating safety-first tactic of attempting to get everyone behind the ball and rely solely on counter-attacks.

Once again, Boyata rescued one of his team-mates with a timely interception following a wretched and far-too-casual pass out from Gordon had put a hesitating Lustig in trouble.

Just before the interval, a sublime pass from Tierney set McGregor free coming in from the angle on the left, but his shot swept wide of the far post. A switch of feet would have opened up a better opportunity, but he went with his favoured left peg.

Seven minutes into the second period it was all over as a contest as McGregor netted No.2 after a neat piece of interchanging saw Sinclair set up the midfielder. He hit it sweetly with his left and the keeper was helpless.

Griffiths then had an amazing miss from eight yards following a splendid left-wing cross from McGregor and shortly afterwards Johnston went on a mazy run in the right which brought about a chance for Tierney just outside the box, but his left-foot attempt was scrambled clear by Kardum.

In the 61st minute, Kristoffer Ajer scored his first goal for the club after an exceptional ball from the right by Griffiths.

His immaculate long diagonal cross drifted to the far post and the skyscraper Norwegian rose to head down across the keeper and his effort bounced into the net off the base of the upright.

With the pressure off and with an eye to the Glasgow derby on Sunday, Rodgers put on substitutes Ryan Christie, Emilio Izaguirre and Jonny Hayes for Griffiths, Tierney and Johnston.

Before he departed the action, Johnston had a glorious chance to cap a marvellous display with a goal, but, unfortunately, lost his composure and smacked his effort off the goalie.

Christie, Sinclair and Ajer all came close before the Lithuanians were put out of their misery.

So, two down and one to go, four goals scored and none conceded. It’s all eyes on Sunday and the hat-trick.