MOTHERWELL 1 CELTIC 2
LEIGH GRIFFITHS soared from zero to hero as he thumped in two goals to take his season’s total to 37 while dumping Motherwell at Fir Park in the process.

Celtic are now eight points ahead of Aberdeen at the top of the league with five games to go, but the Hoops hitman wasn’t entirely satisfied with his display. 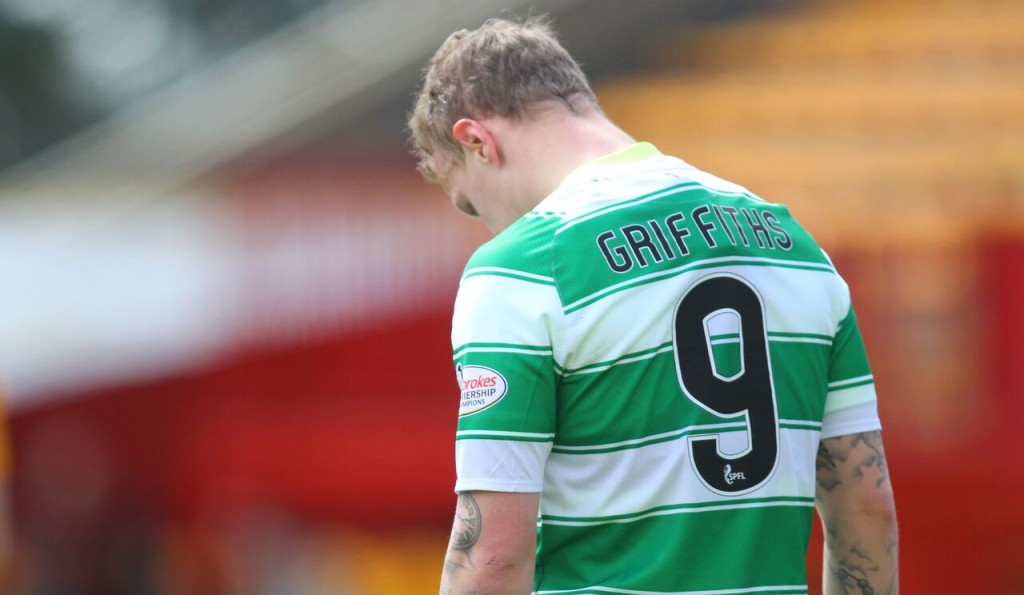 And that included squandering his FOURTH penalty-kick of the campaign in the 27th minute with the game goalless and Ronny Deila’s men storming down on the home defence in numbers.

Referee Willie Collum had little option but to point to the spot when Patrick Roberts, teasing and tantalising throughout, was crudely dumped after an awkward challenge from Morgaris Gomis.

Griffiths, after howlers against FC Stjarnan, Hamilton Accies and Ross County, looked less than convincing as he ran up to take the kick.

And the worst fears of the fans, team-mates and manager were confirmed when he tamely struck a wretched attempt wide of Conor Ripley’s left-hand post.

It didn’t prove to be costly in the end, but Griffiths has put forward a persuasive argument never to be allowed to take another penalty-kick for the Hoops.

However, he did help to make up for his blunder when he opened the scoring just before the interval. And he was so obviously relieved at claiming his first strike in four games, he was booked for removing his shirt in his joyous celebration.

Celtic had been banging on Well’s back door almost from the off and keeper Ripley looked in inspiring form as he pulled off a string of excellent saves to repel the green-and-white raids.

But he had no chance when Griffiths broke the barrier when he finished off an electrifying move which ripped apart the home side’s rearguard.

Scott Brown, shaven-headed again and looking a bit more like his old self in a football sense, too, started it with a neat ball inside to Stefan Johansen. The Norwegian spread it wide to the left into the tracks of the rampaging Kieran Tierney. 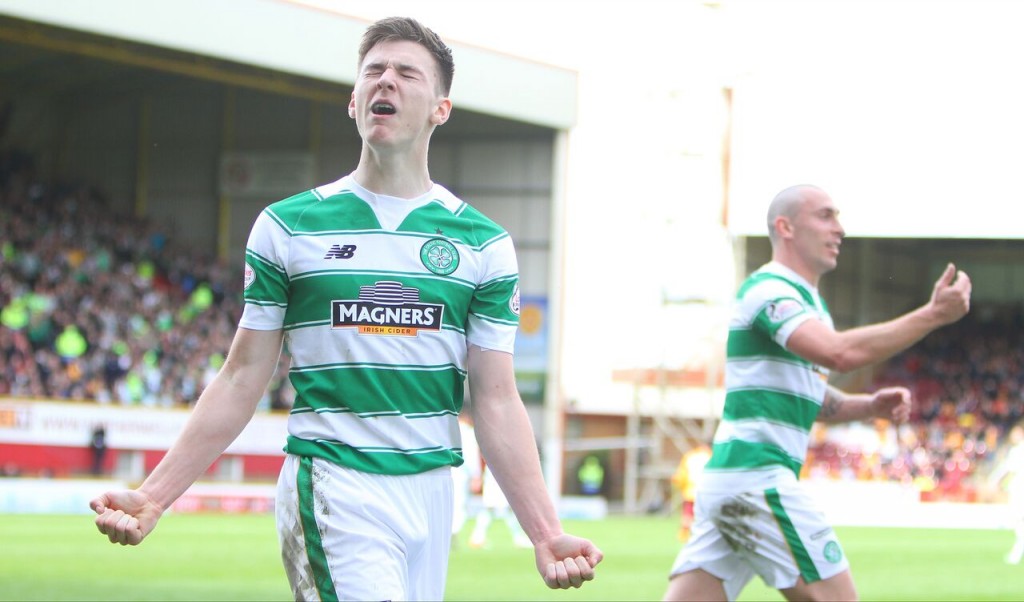 As thoughtful as ever, the teenager pulled it back across goal, Johansen let it go and Griffiths was behind him to connect perfectly with his left foot and the ball sped low and unerringly past the scrambling Ripley.

It was no more than the champions deserved after dominating play against a team that had won its previous five games.

By the hour mark, Celtic had TWENTY attempts on goal and every outfield player, with the exception of Dedryck Boyata, had had a go at Ripley’s goal.

Motherwell, though, looked a lot more purposeful after the interval with manager Mark McGhee no doubt having something to say about their display in the first 45 minutes.

Former Hoops hero Scott McDonald thought he had levelled in the 54th minute when he turned a low left-wing cross from Loius Hoult beyond Craig Gordon, but he was just offside.

The immediate response from the visitors was a clever run and shot from Roberts which was pushed away for a corner-kick by the overworked Ripley.

The on-loan English winger, removed in the fading moments with Stuart Armstrong coming on, looked lively throughout and proved he has courage to add to his undoubted talent. The over-zealous Steven Hammell clattered the Manchester City touchline terror a few times, but not once did he complain. He simply got up, dusted himself down and went again. The veteran defender has enjoyed better 89 minutes in his time at Fir Park.

On the hour mark, though, Well levelled and it had to be McDonald who got the goal. Tierney was caught out with a wicked spin of the ball at the by-line as Josh Law pitched a pass forward. Chris Cadden pounced on it, picked out the littler Aussie in space and he first-timed a drive past the helpless Gordon from 12 yards. 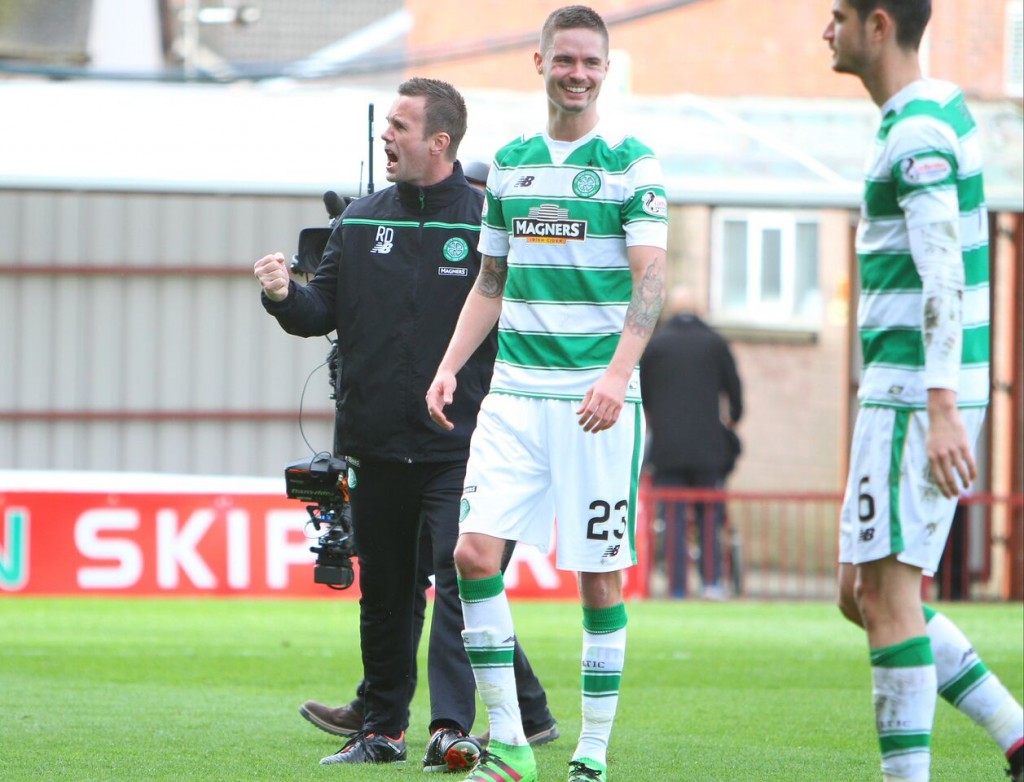 Ten minutes later, Ronny Deila introduced Tom Rogic for Johansen and only five minutes afterwards Celtic were celebrating what turned out to be the winner.

The goal was a travesty for young ‘Well keeper Ripley who had been the side’s star performer up to that crucial point.

Rogic set the every-willing Tierney free on the left and, once again, he placed the ball into a dangerous area. Griffiths hit it sweetly with his elft foot, but it was straight at the shotstopper.

However, there was a calamity for Ripley as he allowed the ball to slip through his hands and legs on its way into the net. It was a dreadful error, but no-one of the Celtic persuasion commiserated with the youngster as Griffiths celebrated again.

It capped a wonderful weekend for the Parkhead men and the fifth successive title is coming sharply into focus.

Now there is the little matter of a Scottish Cup semi-final at Hampden a week tomorrow to be taken care of.