RYAN CHRISTIE has revealed he was surprised Dolly Menga was not red-carded after the Livingston striker had thrust his head aggressively into the Celtic midfielder’s face during Sunday’s goalless draw.

The bustling Belgian frontman made the crude motion as the Hoops star stood on the goal-line as he prepared to defend a right-wing throw-in from Alan Lithgow in the 24th minute of the West Lothian encounter.

Menga, who is likely to face SFA retrospective disciplinary for his intimidating actions, was caught on TV as he made his threatening gesture.

Christie was amazed referee Kevin Clancy did not order off the Livi attacker after calling both players over for a warning following some shoving in the penalty box.

The Highlander, who yesterday sealed a new three-year deal with the champions, said: “We want to cut that kind of thing out of football completely – and rightly so.

“There was no build up to it. It just came out of nowhere. It took me by surprise and it took me a few seconds to realise that he had just put the head on me. 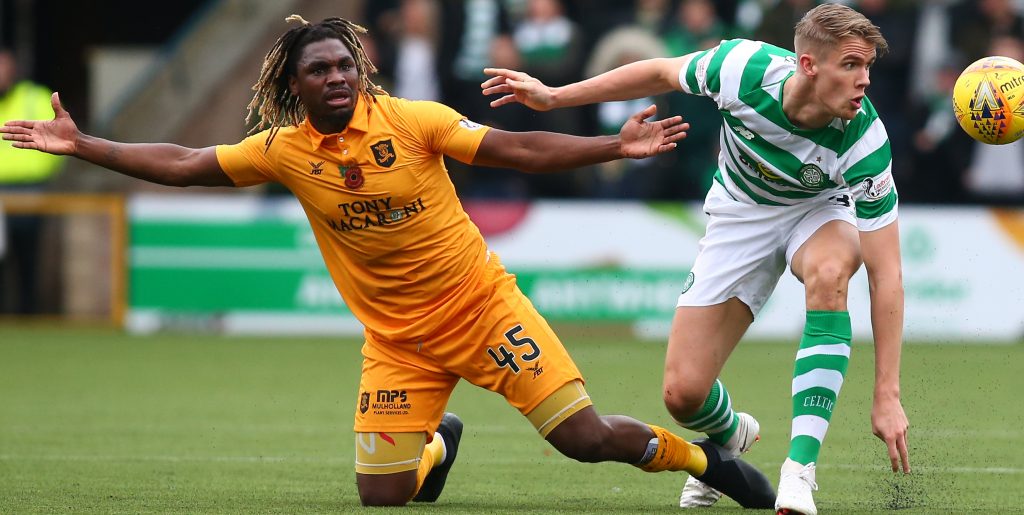 HELLO – AND GOODBYE? – DOLLY…bustling Livi striker Dolly Menga clashes with Kristoffer Ajer, but he could face a ban for another incident with Ryan Christie. Pic: Geo.

“I think I said something like: ‘What are you doing?’ because it was a strange one.

“But I was never going to go rolling down on the ground because it didn’t hurt me. The referee called us both over which made me think that he must have seen it.

“I didn’t get much of a talking-to while he gave him a right talking-to, but no action was taken. If the officials did see something, then it is surprising that he has not been shown a red card. Would I like to see the SFA take retrospective action? That is up to them, not me.

“It is completely gone now for me. If it had affected the game, that is another matter. But it will be interesting to see if they do anything.”

Celtic were involved in a similar controversial off-the-ball incident during the 1-0 win over Sevco Rangers on September 2 when central defender Kristoffer Ajer, while lying on the ground, was kicked by keeper Allan McGregor.

Referee Willie Collum, who appeared to be looking at the flashpoint at the time, amazingly took no action and the Ibrox No.1 escaped punishment after the situation was reviewed by the SFA disciplinary panel made up of former match officials.

As Christie pointed out, it will be interesting if they do anything on this occasion.