Hot on the heels of a former Celtic player becoming the most expensive defender in transfer history, we watched Dedryck Boyata stroll through Belgium’s win against England last night.  I would be more animated on this subject if he was secured on a five year contract, but as he his current deal only has one year to go, such a high profile performance could reduce our options for the player.

How many of you thought we would be in this situation after the Ibrox game in March?  That day Brendan Rodgers said there was better to come from Dedryck.  He is still not the finished article, but he’s a key cog in a team who fancy their chances in Russia.

We have a very special raffle, which ends this afternoon! The shirt Stiliyan Petrov wore in Celtic’s 0-0 draw with Bayern Munich during our 2003 Champions League campaign is available. You can buy a ticket for £1 here on ebay.  Stan signed the shirt.

All proceeds go to the Stiliyan Petrov Foundation to aid research into leukaemia and cancer treatments.  Stiliyan’s recover from leukaemia shows us just how far treatments have come, but as our own CQN community knows too well, more progress is needed.  The draw will be made at Woodside Hotel, Aberdour, where the 14th annual CQN Open Golf Day is now underway.

Hope to see you later. 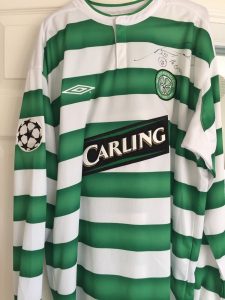