Celtic Quick News on News Now
You are at:Home»Latest News»EX-HEARTS SKIPPER ADMITS JAMBOS STAR SHOULD HAVE BEEN RED-CARDED
By CQN Magazine on 1st August 2021 Latest News

The game was tied at 1-1 in the 56th minutes, shortly after Anthony Ralston had cancelled out ex-Celt Gary Mackay-Stevens’ early opener at Tynecastle.

Then came the flashpoint incident that should have seen the lunging Halliday banished after a horror challenge from behind on Callum McGregor that could have maimed the skipper. Referee Bobby Madden was only six yards from the x-certificate swipe at the midfielder’s ankle.

Remarkably, the match official didn’t even show a yellow card as he merely awarded a free-kick. 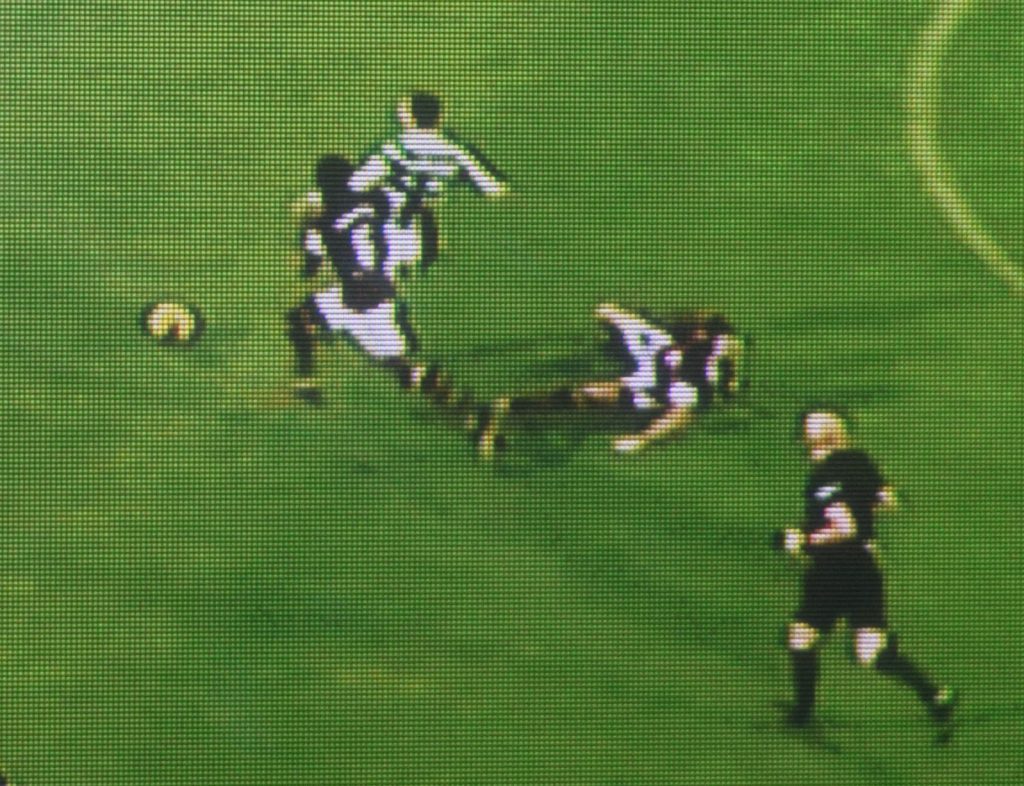 WATCHFUL (BLIND) EYE…Callum McGregor is scythed to the ground by a wild lunge from behind by Andy Halliday with ref Bobby Madden looking on.

It was a decision that left the visitors incensed and even ex-Hearts captain Berra, a match analysts for Sky Sports, had to admit: “After seeing it back, I thought it could have been a red card. Actually, when I see it again, I think it’s definitely a red card.

“That could break an ankle or an Achilles. It’s a naughty challenge, he’s not getting the ball. He’s very fortunate to get away with it.”

This is the same referee who took THREE SECONDS to produce a straight red card for Nir Bitton for pulling down Alfredo Morelos in the January game at Ibrox. It was not a dangerous challenge from the Israeli, but Madden, from about 50 yards away, was lightning swift to get out a card to banish the Celt. As CQN pictures proved at the time, the whistler was waving the red before his assistant had the chance to raise his flag for a foul. 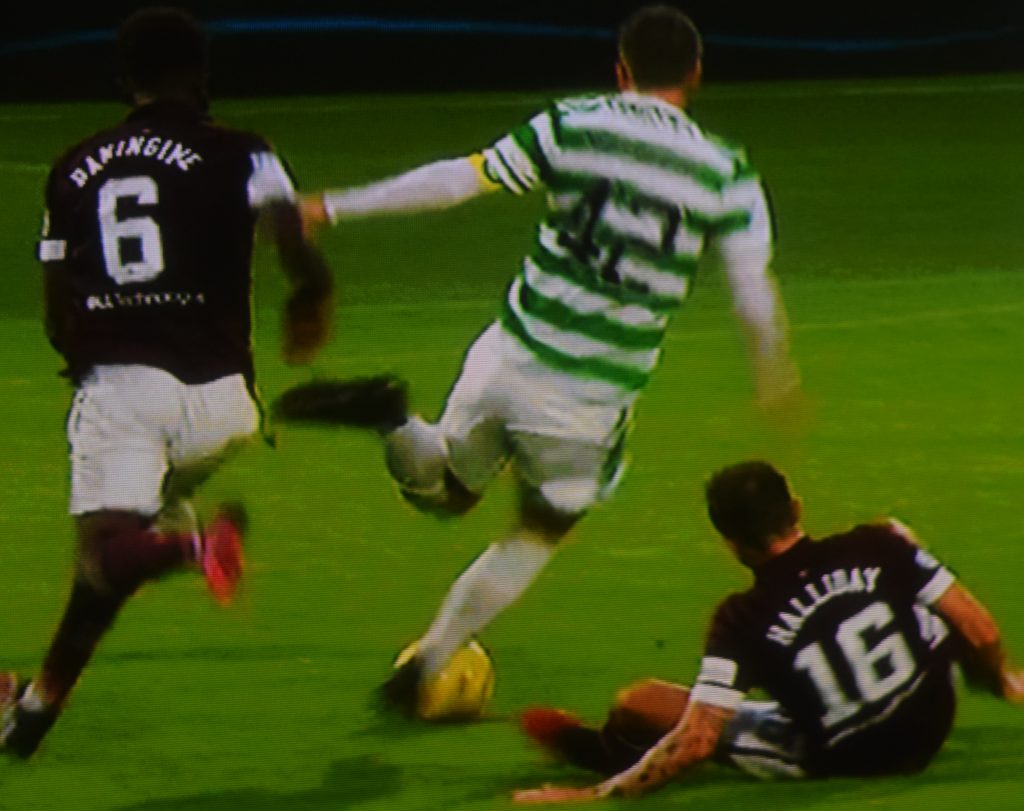 NO OFFENCE…Callum McGregor is about to be sent flying following a swipe from Andy Halliday. 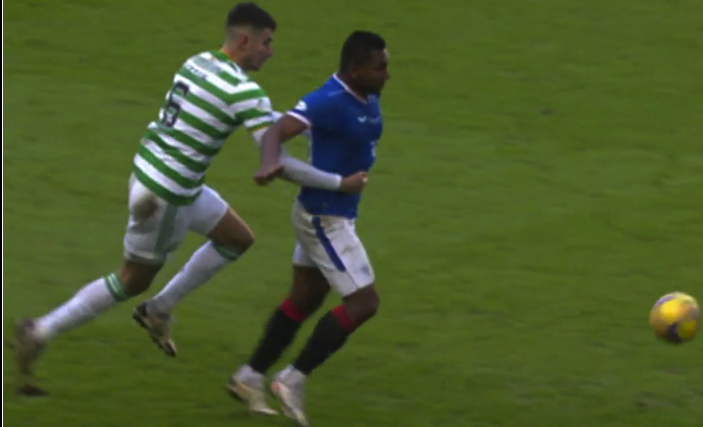 It’s a mesmerising and befuddling mix of values from the same individual on what constitutes an ordering-off or what goes unpunished.

At CQN, we attempt to stay away from being sucked into the orbit of conspiracy theories, but there are occasions when we are left with no alternative but to ask the questions.

We can also analyse the referee’s decision to award the free-kick from which Hearts scored their winner. Pictures clearly show Ismaila Soro cleanly making a tackle to get the ball. If anything, John Souttar, who with the greatest of ironies headed the winner from the resultant award, is leaning back into the Ivorian.

So, Celtic can rightly feel hard done by during an encounter when the opposition were given the benefit of the doubt on an extraordinary percentage of occasions. 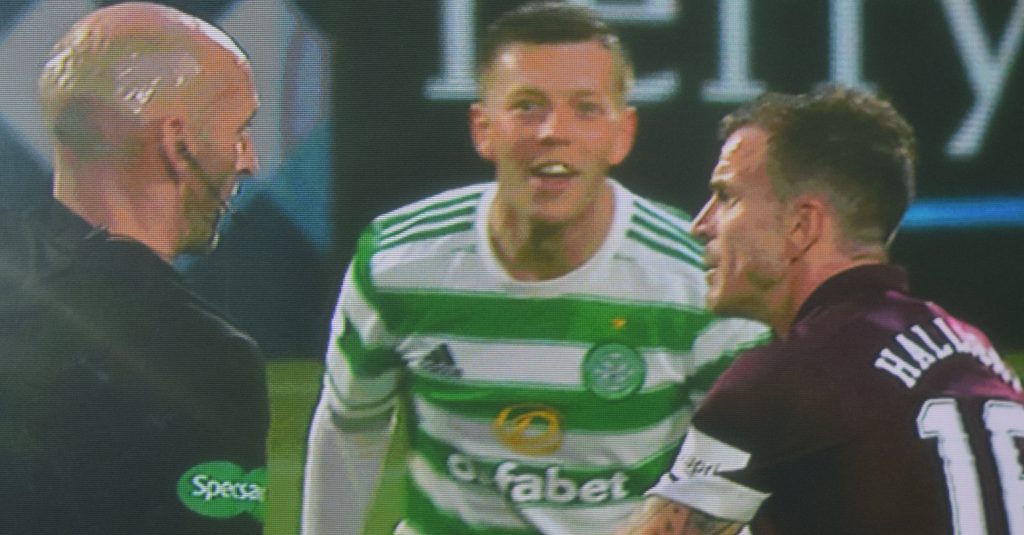 Of course, Halliday, who has some previous form against the Hoops, may still be on the receiving end of retrospective punishment. If anyone on that panel is listening to the words of Berra, a former Hearts stalwart who also made 41 appearances for Scotland, they may decide they have little option but to ban the offender.

There is little doubt, though, he should have been dismissed with a third of the contest still to be played.

Afterwards, McGregor focused on the job at hand and, speaking to the Sunday Mail, said: “A lot of new players are coming together and we have to make that bedding in period as small as possible.

“It’s important that we don’t drop our heads and don’t go into our shell and start to panic a little bit.

“We know where we want to get to and that requires hard work and concentration and bravery.”