LUCA CONNELL has admitted he “is over the moon” after agreeing a three-year deal with English third-tier side Barnsley.

The Republic of Ireland Under-21 midfielder was released by Celtic at the end of the season after spending two years on loan at Queen’s Park where he made 43 appearances in their back-to-back promotions.

Left-sided Connell, who was signed by Neil Lennon from Bolton for £350,00 in June 2019, sent a classy farewell message to the Hoops after he was released, as CQN reported earlier this week.

The playmaker, speaking to the Barnsley club website, said: “I’m over the moon to finally get it done. 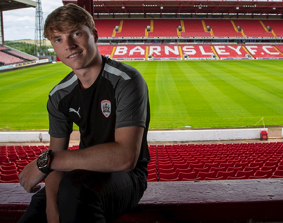 NEW HOME…Luca Connell was delighted to agree a three-year deal with Barnsley.

“Over the years there’s been some speculation about it happening, but I’m finally here and I’m happy to be a Barnsley player.

“My agent is from Barnsley, so he’s told me about the history of the club. I know we need to bounce back to get this club back where it belongs.”

Connell is due to turn up for his first training session at Oakwell on July 1 when his new career kicks off with the team that was relegated from the Championship last season.

Great things were predicted for the player when he was brought to Parkhead, but, after a few appearances in friendly outings, he did not play a solitary competitive game for the Hoops.