Celtic Quick News on News Now
You are at:Home»Latest News»‘HELL OF A CHALLENGE,’ LENNY
By CQN Magazine on 25th September 2019 Latest News

NEIL LENNON admits keepng Celtic on track for the historic treble treble last season was “a hell of a challenge”.

Now, as the Hoops boss prepares for the visit of Partick Thistle in the Betfred League Cup quarter-final at Parkead this evening, he revealed the pressure has eased.

Lennon, of course, was catapulted back into the job in February after the swift departure of Brendan Rodgers to Leicester City.

Forty-eight hours later, he led the team to a crucial 2-1 Premiership victory over Hearts at Tynecastle where Odsonne Edouard claimed the stoppage-time points-clincher.

Three days later, the Irishman manoeuvred the team through a difficult Scottish Cup quarter-final aganst his former side Hibs at Easter Road with James Forrest and skipper Scott Brown on target with second-half strikes.

It’s in the history books now that the champions succeeded on both fronts as they picked up the trophies to add to the seven successive pieces of silverware for a three-year clean sweep.

Lennon acknowledged the heavy burden he inherited and, speaking to the Evening Times, said: “I think that was more the case early on, going back to last season, when we won away to Hibs in the Scottish Cup and then had Aberdeen in the semi-final.

“The pressure at that stage was immense. It has sorted of dissipated slightly. 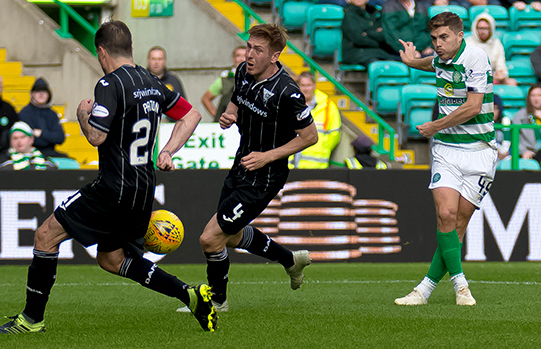 THE WINNER…James Forrest strikes his extra special goal against Dunfermline.

“There is always pressure in this role when in a Cup competition, but I don’t feel the weight of pressure this time which I might have done three or four months ago.

“It’s lovely. I can breathe a little bit better.

“Every game last season, more or less, was me having to win this game if he wants the job, he has to win that game. It was Hibs, Rangers, Aberdeen, then winning the league, then the Cup Final. All those sort of aspects.

“The pressure was great and it was a hell of a challenge. It was one which made you feel a tinge of pride that we were able to steer through it.

“And now we’ve had a great start to the season domestically. The only disappointment was the loss to Cluj and since then the response from the team has been superb.

“The last round was a grind for us and it might be again against Thistle.

“We are probably favourites for it, and rightly so, but I don’t think that’s a tag the players aren’t used to.

“We don’t feel any extra pressure going into these games because of the things that have gone on before in this competition.”

The holders were given a scare by Championship outfit Dunfermline in the previous round where it took a late goal from Forrest in extra-time to prevent the game going to a penalty-kick shoot-out.

Lennon – and the Hoops support – will be hoping there is no such trauma in the east end of Glasgow this evening.