And the Hoops hero also warns the champions they could kiss goodbye to any dreams of nine in a row if the French Under-21 ace is lured from Parkhead at the turn of the year.

Edouard has been in sparkling form this season and has been leading the line practically on his own since the campaign’s kick-off.

Leigh Griffiths, who has not made an appearance since August and has scored only two goals this time out, and Ivorian Vakoun Issouf Bayo, with a solitary strike against Partick Thistle in the Betfred League Cup victory in September, have been bit-part players in the continued quest for silverware.

Hartson, speaking to the Evening Times, said: “The offers will come in and it’s then up to Celtic what they do. But one of the reasons Moussa Dembele maybe moved on was because they had Edouard waiting in the wings, and Brendan Rodgers paid £9million for him, so they realised his potential. 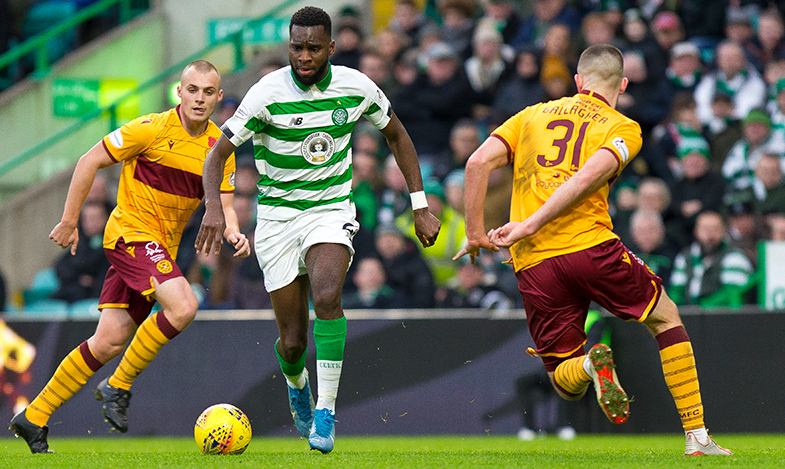 ON THE ATTACK…Odsonne Edouard takes on the Motherwell defence.

“He’s certainly in the type of bracket as Dembele if Celtic consider selling him. You look at what Dembele went for. Edouard is younger, a French Under-21 player.

“Edouard’s got the world at his feet and he’ll get better and better. He’s on a long-term contract, so Celtic won’t be too worried, but he wouldn’t go for cheap, that’s for sure.

“If you look at what Dembele went for then Edouard is certainly in that type of bracket if Celtic ever consider selling him.

“Celtic have shown they can play Ryan Christie further up, while James Forrest can also play off the front. Mohamed Elyounoussi is also a forward-thinking player.

“They are a little light in terms of back-up to Edouard, although Leigh Griffiths is on his way back.”

Dembele quit the Hoops on the last day of the August 2018 deadline in a £19.8million for Lyon while Edouard arrived on a permanent basis after his impressive loan spell the previous year.

The 21-year-old has claimed 13 goals this term, but has earned massive praise for his mature hold-up play, as well.

He signed off for the international break with the opening goal in the 2-0 Premiership win over Motherwell at Parkhead and Livingston will be in his sights a week tomorrow.