That’s the verdict of Hoops boss Ange Postecoglou who has seen the resugence of the right-back rewarded with a contract that will keep him at Parkhead until the summer of 2025 at least, as CQN reported earlier this week.

There were more than a few surprised Hoops fans when 22-year-old Ralston’s name was missing after Scots supremo Clarke announced his most recent international squad for the World Cup qualifying double-header in Moldova a week tomorrow and Denmark at Hampden three days later.

Asked about the possibility of the rejuvenated defender getting the call-up in the near future, Postecoglou answered: “I don’t see any reason why not. I think every footballer has that ambition within them and I think that he is showing. 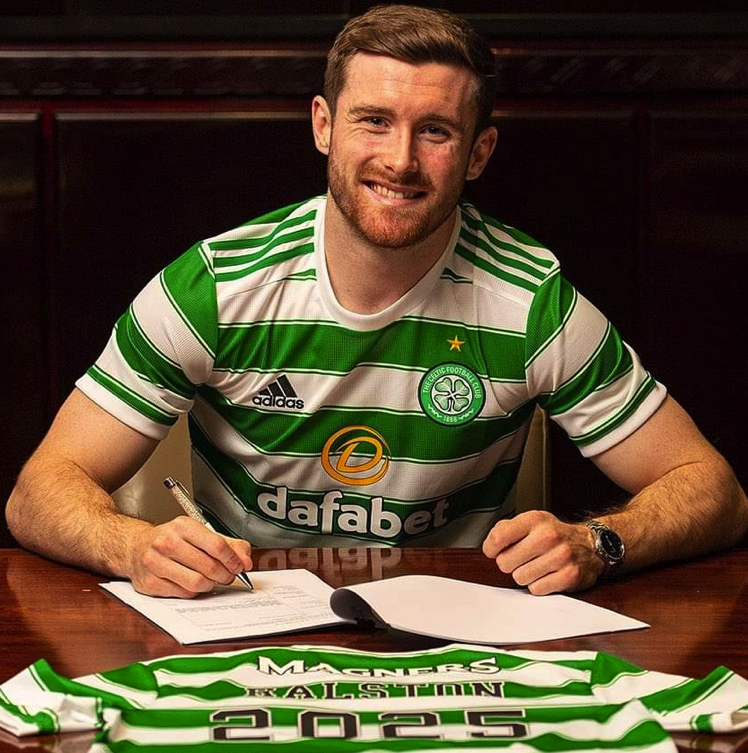 BHOY’S OWN…Anthony Ralston is happy to sign on the dotted line of his well-earned contract extension.

“In his position, he’s probably the stand-out performer this year in the Premiership, so I’m sure he’s on Steve Clarke’s radar and, at the end of the day, he needs to keep performing so that his form is compelling enough that he gets selected.

“I think that will be something that is in the back of his mind, but he knows he needs to keep performing for Celtic first.”

On the contract extension, the Greek-Australian gaffer, speaking to the Glasgow Times, added: “It’s a boost and great rewards to him for his hard work and the level of football that he has been playing.

“He understands why this has happened. It is not because we like him or he works hard because he has always done that. It is because of his performance and his improvement and I’m sure that’s what he’ll want to keep doing.

“He has a great opportunity now, he has security at the club to make a career for himself and that’s what he’s always wanted here at Celtic. It’s up to him to keep improving.”