The Sevco Rangers boss clashed with the Hoops midfielder as the players left the field at half-time.

Caixinha was fuming following an incident with Brown and Gers’ Colombian striker Alfredo Morelos just before the break.

Heated words were exchanged between the pair before they were ushered apart.

The volatile Portuguese coach admitted: “I just told him (Brown), be clear, with me on the pitch, you’re not giving me an elbow. 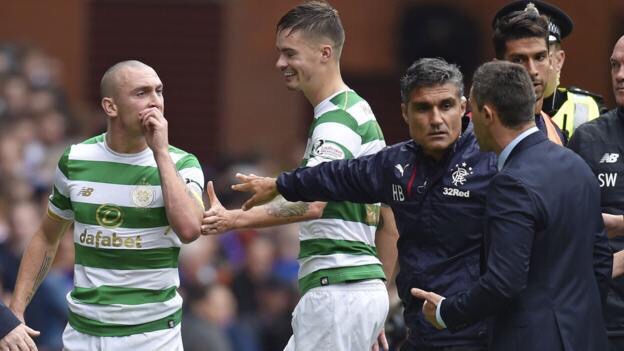 “You do it because you demand everything and everyone allows you to do it, but not with me. Loud and clear, loud and clear.

“I don’t care if he got the message, I’m here to face whatever I need to face.

“When these things happen, someone needs to take decisions. I’m here to take my decision, but all the others in other jobs need to take theirs.

“It’s the second time in a row I’ve watched this at Ibrox.

“It’s my job to be aware of what’s going on in the game and a lot to defend my club and defend my players.”

Asked about the so-called incident, Brendan Rodgers replied: “I didn’t see that.”

The SFA Compliance Officer will no doubt be giving the Sevco Rangers manager a call first thing tomorrow morning!