OLIVIER NTCHAM has given Celtic a massive fitness boost as Neil Lennon prepares for the visit of Steven Gerrard’s outfit a week tomorrow.

The French midfielder has not kicked a ball since the 1-0 defeat at Ibrox just before the turn of the year.

However, the £4.5million buy from Manchester City in the summer of 2017 played 45 minutes of a bounce game against Morton yesterday as he stepped up his rehabilitation.

Ntcham looked to be running freely and could now be in contention for a place in Lennon’s squad for an encounter that could see the champions stretch their advantage at the top of the Premiership to THIRTEEN points. 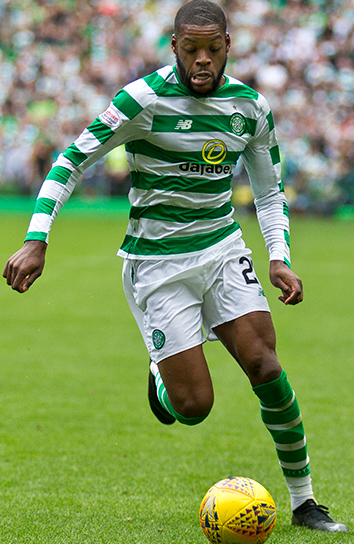 ON THE BALL…Olivier Ntcham is hoping to return.

There were a host of senior players involved against the Greenock team with Odsonne Edouard performing for an hour and the match also featured on-loan Leicester City defender Filip Benkovic, who made his comeback from injury as a second-half substitute for Kristoffer Ajer in the 1-0 win over Dundee at Dens Park on Sunday.

Former Arsenal prospect Armstrong Oko-Flex started, as well, but the game came too early for Tom Rogic who is still attempting to overcome a knee problem and, like Ntcham, has not appeared in 2019.

There are still concerns over the fitness of Kieran Tierney who returned early from the Scotland international squad who lost 3-0 to Kazakhstan on Thursday and will complete the Euro 2020 double-header against San Marino tomorrow.