Celtic Quick News on News Now
You are at:Home»Latest News»O’RILEY THANKS FANS FOR ‘MENTAL’ EXPERIENCE
By CQN Magazine on 3rd February 2022 Latest News

The 21-year-old midfielder was close to being speechless after the Hoops’ extraordinary three-goal first-half as they raced away with the Glasgow derby to go top of the Premiership in front of 60,000 delirious fans last night.

O’Riley, who has just arrived from English third-tier side MK Dons, was a stand-out in only his third first-team outing as he clearly revelled in the electric atmosphere.

It was undoubtedly breathtaking stuff from Ange Postecoglou’s side during a whirlwind opening period when Reo Hatate fired in a double and then set up Liel Abada for the third.

The elegant playmaker said: “I can’t compare that to anything that I’ve ever been in.

“No, no chance. I can’t even hear my own voice right now, so that says enough. 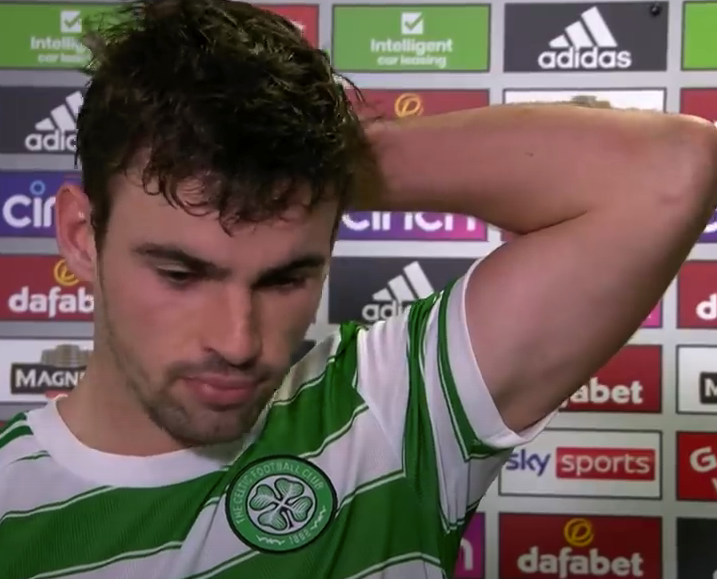 “It was mental, a crazy experience. I’m actually struggling to put it into words.

“But, honestly, we’ve got to have the best fans in the world. I’ve not seen anything like that in my life.

“I’ve been to a lot of football games – Champions League games. All I can say is thank you to the fans because it was mental.”

O’Riley, speaking to Celtic TV, added: “Off the pitch, we are very tight group, so that makes it easy to transition onto the pitch.

“We are not fazed by the magnitude of the game. We felt calm, we felt ready and I think that showed in that performance.

“We can’t get carried away. We will definitely enjoy it, we have to because there is not many nights like this that you experience.”

PARADISE…Celtic players celebrate with the fans at a rocking Parkhead.

Tom Rogic will be available for Sunday when Postecoglou takes the Hoops, now leading the league by a point with 14 games to go, to Fir Park to face Motherwell.

The Australian performer has been on World Cup duty with his country, but should be okay for the 1.30pm kick-off.

It gives the manager the sort of selection problem he craves after his deals in two transfer window when 17 players have been brought to the club.

O’Riley is already looking like a bargain buy at £1.5million.