ANGE POSTECOGLOU lauded the unsung heroes of Celtic’s phenomenal title surge after the hard-fought and well-deserved win over Ross County in Dingwall yesterday.

Cameron Carter-Vickers and Carl Starfelt put their bodies on the line when the Highlanders staged a spirited revival at the start of the second-half as the Hoops protected their one-goal advantage following Kyogo Furuhashi’s 12th-minute header.

Anthony Ralston and Greg Taylor worked hard on the flanks and keeper Joe Hart looked composed as the team claimed their third shut-out in their past four Premiership outings with Aaron Ramsey’s early goal at Ibrox the only time the 35-year-old 75 times-capped England international has been required to retrieve the ball from the back of his net.

THOU SHALT NOT PASS…Cameron Carter-Vickers and Reo Hatate combine to block a shot from Ross County’s Harry Paton with Joe Hart, Anthony Ralston and Carl Starfelt in attendance.

Not that it was too anxious a moment for the visitors who came back to win 2-1 in Govan with strikes from Tom Rogic and Carter-Vickers to stretch their advantage at the top of the league to six points, a lead they have maintained after successive wins over St Johnstone, a 7-0 romp in the east end of Glasgow just over a fortnight ago, and the 2-0 victory in the Highlands.

Before the victory over Giovanni van Bronckhorst’s club, Ross County again fired blanks when Giorgos Giakoumakis claimed his second hat-trick of the campaign in a 4-0 triumph at Parkhead.

Filipe Jota collected his eleventh goal of the campaign with the killer second against Malky Mackay’s battlers, but it was the Bhoys at the back who earned special praise from the manager.

Postecoglou said: “You have to do both sides of the game – for us, the defensive side of the game as a team has been excellent all year. 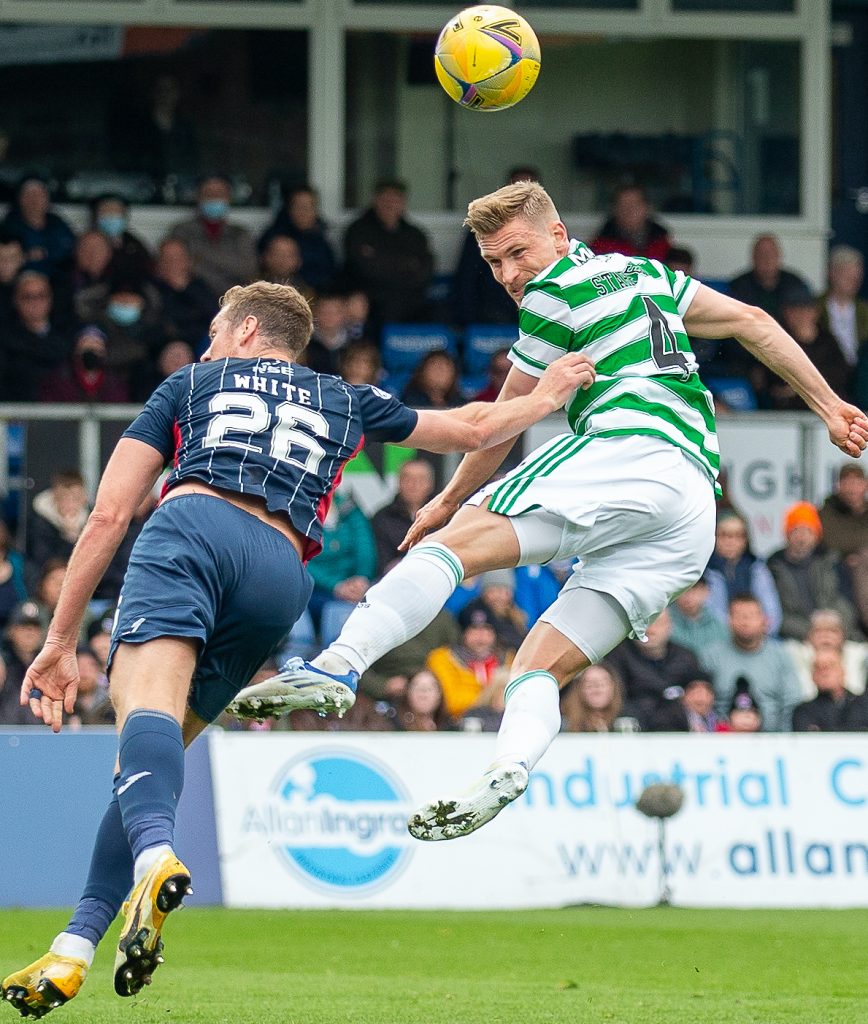 “And it was again today. Obviously, they (Ross County) pose a threat because every chance they get, they’ll throw the ball into the box, from a long throw, or a free-kick or from the keeper.

“They’ve got some big guys in their team, so we had to be strong, and again I thought we handled it well.”

“Not many teams have beaten them here and they are a difficult team to play against, but I thought we really controlled the game well.

“We probably should have been two or three up in the first-half, but the boys showed the resilience we needed and we got the result.

“We’ve got another game next week which I’m sure everyone is looking forward to. All we can do is keep playing our football – and keep winning games.

“If we keep doing that, then for all of us, we’ll get where we want to be.”