Celtic Quick News on News Now
You are at:Home»Latest News»SCOTS WONDERKID UP FOR GRABS
By CQN Magazine on 23rd June 2021 Latest News

SCOTLAND wonderkid Billy Gilmour will be allowed to leave Chelsea on loan in the summer.

The news is bound to alert clubs throughout Europe after the 20-year-old midfielder’s excellent performance in the goalless draw against England at Wembley on Friday.

Gilmour was missing when Steve Clarke’s side crashed out of the Euro Finals in a massively disappointing 3-1 loss against Croatia at Hampden last night, as CQN reported.

The Stamford Bridge starlet was sidelined after testing positive for Covid and his influence was missed with his replacement, Stuart Armstrong, having an evening to forget before being withdrawn in the 70th minute. 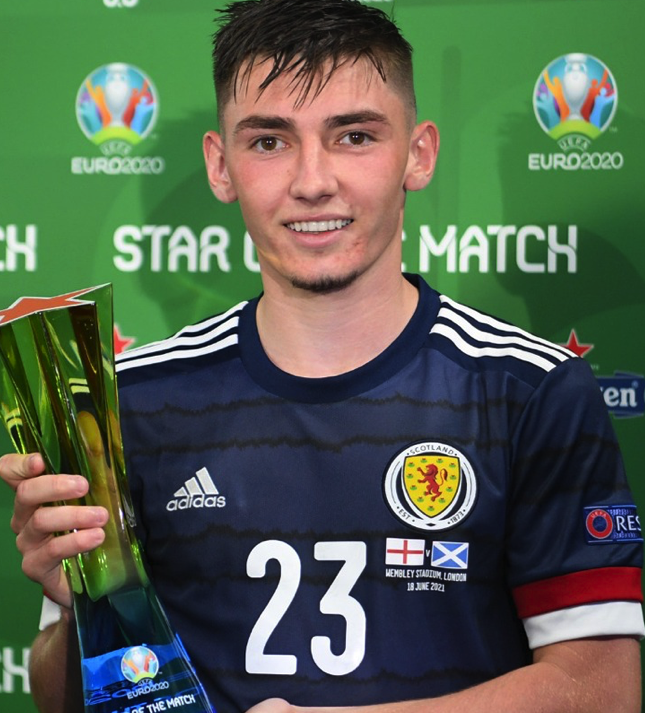 MAN OF THE MATCH…Billy Gilmour with his honour following his five-star display at Wembley.

New boss Ange Postecoglou watched Gilmour from the stands against Gareth Southgate’s men last week and must have been impressed.

The Hoops have returned their loan players since their temporary deals expired and that has seen the exit of Shane Duffy (Brighton), Mohamed Elyounoussi (Southampton), Jonjoe Kenny (Everton) and Diego Laxalt (AC Milan) with the Uruguayan just agreeing a four-year deal at Dinamo Moscow.

Postecoglou will be scouring the market as he prepares for the Parkhead club’s major revamp and Gilmour could come on his radar.

First in line for the youngster’s services for the new campaign, however, are newly-promoted Norwich City, according to a report in the Daily Mail.

Newcastle and Southampton are also among his admirers, but Carrow Road gaffer Daniel Farke has a good relationship with Chelsea counterpart Thomas Tuchel which may give the German the edge.

Gilmour has featured 21 times for the London outfit after progressing through the youth ranks. He joined after walking out on Ibrox.