CHRIS SUTTON insists the SFA must ban Calum Butcher following his x-certificate lunge at David Turnbull during Celtic’s 3-0 win at Tannadice on Sunday.

The Dundee United defender launched himself into a wayward challenge on the Hoops midfielder that “could have broken” the player’s leg.

Astoundingly, referee Don Robertson reckoned the offence merely merited a yellow card, but Butcher will learn this afternoon if he is in line for further punishment. 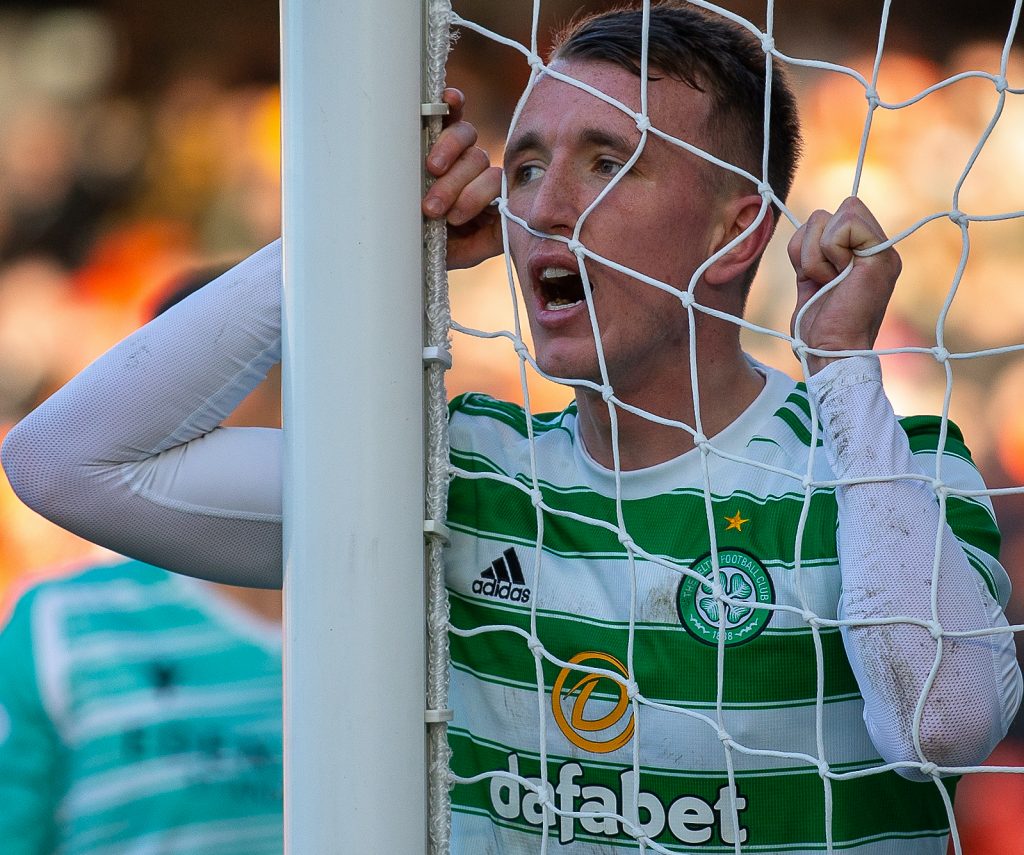 ANGUISH…David Turnbull grabs the net after passing up  glorious chance against Dundee United.

New rules drawn up last summer allow Hampden compliance officer Andrew Phillips to step in and deal with such situation – even if the player has been booked at the time.

Previous guidelines would have blocked further action, but it is almost certain the Tayside player, who was making a return to action after serving a two-match suspension following a straight red card against Aberdeen last month.

Former Hoops goal hero Sutton said: “It was an outrageous tackle. He could have broken David Turnbull’s leg.

“Listen, I like Calum Butcher as a player – but that was miles over the top. It was reckless and dangerous. Turnbull was lucky to avoid serious injury.
“You can’t allow that sort of challenge to go unpunished. What sort of message does that send out about Scottish football?

“That we allow this kind of thing to go on? This is not the Wild West.”

Sutton, in a report in the Daily Record, added: “I can’t fathom why the officials missed it in the first place. It was a clear red card.

“Scottish officials have had a bad week or so, but this should have been an easy decision. People talk about VAR, but it shouldn’t even need to go to a video replay to see that was an awful tackle.

“They’ve left the SFA with no choice but to step in and deal with it because that simply cannot go unpunished.”

If the compliance officer decides the incident is worth pursuing, he must get unanimous backing from three former match officials that the offence merited a red card.

Phillips has until three o’clock this afternoon to slap Butcher with a notice of complaint.