Celtic Quick News on News Now
You are at:Home»Exclusive Series»THAT SEASON IN PARADISE: MAY:  THE SACRIFICE OF A SHOWMAN
By CQN Magazine on 13th April 2020 Exclusive Series

Today, the author turns the spotlight on Little Mr Mischief. the one-and-only Jimmy Johnstone, and the selfless role he played in the glorious triumph over Inter Milan in the European Cup Final on May 25 1967 in Lisbon.

IT TOOK the rest of the newly-crowned Lisbon Lions a fair bit of time amidst the euphoric aftermath to convince Jimmy Johnstone he hadn’t let the team down. The little winger figured he hadn’t played to potential as Inter Milan were swept aside.

There can be little doubt that the man who was daubed Mickey by Jock Stein after the famous Walt Disney cartoon mouse, but known as Jinky to his team-mates, was a complex character who continually sought reassurances – even minutes after being part of a historic Celtic team that had just claimed the glittering European Cup.

Bobby Murdoch, in his 1970 memoirs, gave an interesting insight into the psyche of his good friend. He said, ‘Probably the most controversial player we’ve had at Celtic Park since I established myself in the first team is little Jimmy Johnstone. For a wee fellow, Jimmy has had a fairly fiery career, to put it mildly. Controversy and problems are never far away.

‘Yet you won’t find a bigger worrier anywhere than Jimmy Johnstone. We came into the Celtic team during the same season and played on the right-wing together. Because of this, I have got to know him really well and I really do understand him. As a footballer, I rate him as one of the best I have ever seen anywhere. He is positively brilliant on the ball, yet in those early days when we were both trying to create an impression with our rather immature standard of play, Wee Jimmy just wouldn’t believe he was any good.

‘He had no faith whatsoever in his own ability and I used to shout myself hoarse telling him that he could take the full-back any time he wanted. He had to be encouraged all the time. I was almost a private coach to the Wee Man, shouting stuff like, “The full-back is scared stiff of you, Jimmy” or “You can take him any time you like” or “You’ve got this team worried sick”. And so on for ninety minutes. He had to be kidded and coaxed all the way.

‘In the years since, however, he became steadily more confident and now demands the ball from all of us. It is always his plan to make a fool of the full-back so that he will lose his composure and panic into mistakes. When he is on form there are times I almost feel sorry for the opponent. Jimmy, though he now owns a restaurant and pub and drives a Jaguar, still feels insecure. He still takes all his problems on the field with him and there are times when his concentration isn’t what it should be. He’s the kind of person who has to see hard cash in his hand before he believes that he is really as well off as people say he is. 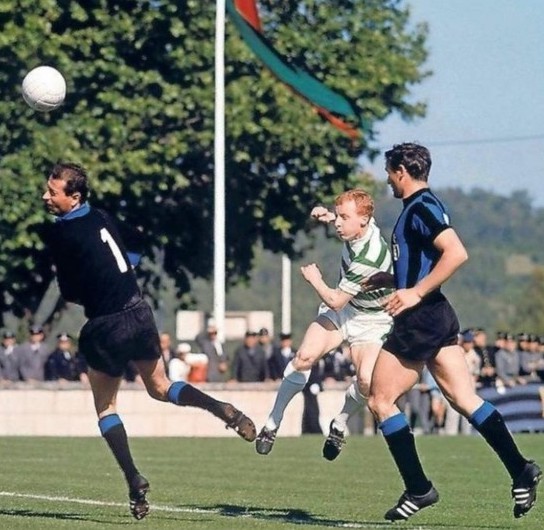 FLYING HIGH…Jimmy Johnstone is just off target as keeper Giuliano Sarti attempts to block his effort.

‘There’s always a bit of fire in a red-head, of course, and Jimmy is no exception. He takes it very badly when he has one of those days when nothing goes right for him. A lot of his trouble on the field has simply come about because he has lost patience with himself and has taken it out on an opponent. He has no hatred for any player, it is just that he blows up so easily when things are going against him.’

Former Celtic manager and player Davie Hay, now a distinguished and worthy ambassador of the club, was closer to Jinky than most and accepted he was the Wee Man’s unofficial off-the-park ‘minder’. He said, ‘Jinky possessed a self-destruct button. He could be a complex personality if he perceived there was an injustice being done to him. It could be real or imagined, but you could always detect that Jinky was fretting about something.’

Many years after Lisbon, Jimmy Johnstone, in a reflective moment, said, ‘I’m proud that I was part of the greatest club in the world. To be the first British team to win the European Cup, but more so to be part of the greatest Celtic team ever. That’s something else, isn’t it?

‘Picture it, though. Who were we? We were nobodies, just a bunch of guys. Here we were in Lisbon, playing against the mighty Inter Milan. If you remember, they had won the European Cup and the World Championship twice in three years. Big Jock always said we’d win, but, to be honest, I thought we’d get a right gubbin’. I can see them yet standing alongside us in the tunnel waiting to go out onto the pitch – Facchetti, Domenghini, Mazzola, Cappellini, all six-footers wi’ Ambre Solaire suntans, Colgate smiles and slicked-back hair. They even smelt beautiful.

‘And there’s us midgets. Ah’ve got nae teeth, Bobby Lennox has’nae any, either, and old Ronnie Simpson’s got the full monty, nae teeth top and bottom. The Italians are starin’ doon at us and we’re grinnin’ back up at ’em wi’ oor great, gumsy grins. We must have looked like something oot o’ the circus. 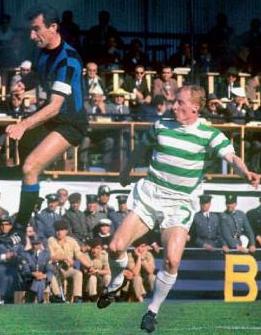 ‘But, somehow, we knew within ourselves, our own ability and we started to believe in ourselves, but we never, ever for a minute thought that we would win the European Cup. Afterwards? We all got drunk, I think. For a week after it, we just got drunk.’

Even today, the mere mention of Jimmy Johnstone brings a beaming smile to the Danny Kaye features of Tommy Gemmell. He recalled, ‘Wee Jinky used to tell me how disappointed he was with his own performance in Lisbon. He really wanted to go out there and just take over. As we all know, he was a cocky, capable little character when he was in the mood and he knew this was his sort of platform.

‘The European Cup Final was invented for Jinky; that was his sort of stage. But it is to his eternal credit that he sacrificed himself that day for the team. He roamed here, there and everywhere taking the Italian team’s tough guy Burgnich with him. It wouldn’t have been how he thought or dreamed how it would turn out, but he saw the team as being a lot more important than himself and he just got on with putting in a marvellous shift.

‘Jinky really couldn’t fathom what he had given the team against Inter. Their manager, Helenio Herrera, was acclaimed as possessing one of the most tactically astute minds in the game. Unfortunately, it was built solely on defence. He would have plotted and planned for this game as soon as he knew who his team would be facing in that Final. 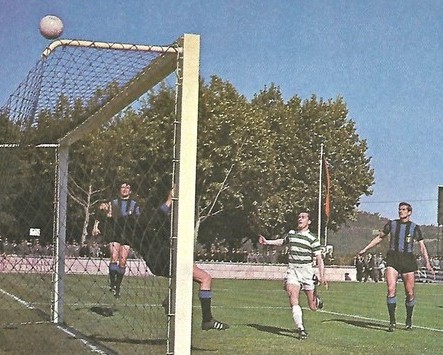 ‘There’s little doubt that he believed Jinky would have performed throughout the match wide on the right in his usual position. And no doubt he would still have stuck Burgnich on him and that would have given Facchetti a bit of freedom to race up their left side.

‘But Facchetti wasn’t afforded the cover his team-mate would have given him and he was pinned back in his own half for virtually the entire game. He might have looked for some help from the other central defenders, but they were getting tied up by the movement and interchanging of Willie Wallace, Stevie Chalmers and Bobby Lennox. Jinky was totally unselfish, but so, too, were those three guys. They were all noted goalscorers, but, like Jinky, they were asked to perform against the Italians in a different manner to confuse the opposition.

‘Jock wanted them to make openings for Bertie Auld and Bobby Murdoch, supporting from the midfield, and for me and Jim Craig coming down the flanks. The four of us would pass the ball to feet, take the return and move forward. One quick glance at the statistics will tell you all you need to know. Believe it or not, we had forty-two attempts at the inter goal with twenty-six on the button.

‘I had nine shots on target, Bertie had two, including one that struck the bar, Jinky had two, including a header, and Bobby had four efforts saved by Guiliano Sarti who was having the game of the life. The performance of the keeper would have broken the hearts of other teams. We weren’t just any other team, though, and we proved that in Lisbon. And what about the three guys up front, Wallace, Chalmers and Lennox, who had scored nine of our sixteen goals in the competition prior to the Final? Stevie had claimed five while Wispy and Lemon had two to their name.

‘As you might expect, I’ve watched that European Cup Final several times now – if I’m being honest, I think I’ve worn out about a couple of hundred pairs of specs! –  and even I have been surprised to discover that Stevie only had one shot on target – the winner! – Wispy drew one save and, astonishingly, Wee Lemon didn’t work the keeper at all! So, if we are just judging the European Cup Final through statistics, then Jock’s tactics were absolutely spot-on. But a wee guy called Jinky was instrumental to everything that went on that day. No-one should ever forget that. ‘

Willie Wallace added, ‘Wee Jinky, of course, was an unbelievable character. I’ve always thought someone should write a Harry Potter-style book about a wee footballer who could do all these magical things as he grows up. You could base it on the life and times of Jimmy Johnstone, I suppose. He was a special player and Lisbon was an ideal setting for him. He told me and all the other Lions afterwards that he wished he could have contributed more that day. We told him to behave himself and stop looking for compliments.

‘Inter MIlan stuck a bloke called Tarcisio Burgnich on him that day and he was one of the best man-markers in the world, if not the best. But Jinky stuck at his task throughout the ninety minutes. Burgnich never left his side and Jinky took him into areas that opened up the way for Bobby Murdoch and Wee Bertie to come through. It’s not the stuff that is immediately noticeable, or even appreciated by some supporters, but players know what it is all about. Anyway, I will always remember Wee Jinky coming so close that day with a header, which wasn’t bad for a bloke who stood 5ft 4in.

‘Cairney dinked one in from the right and, for once, Burgnich was nowhere to be seen. Jinky just took off and made perfect contact with his head. The ball was hurtling high into the net until Giuliano Sarti, who might have thought it was going over under its own steam, suddenly reacted to the danger and sprang high to get a hand to the effort to turn it over the crossbar. If he had hesitated, Wee Jinky would have scored. With a header!’