Celtic Quick News on News Now
You are at:Home»Latest News»THREE CELTIC GAMES SWITCHED FOR LIVE TV
By CQN Magazine on 14th December 2016 Latest News
CELTIC’S Premiership game against Hearts next month, scheduled for Saturday, January 28, has been switched to accommodate live TV broadcast.
Sky Sports will now show the Parkhead fixture 24 hours later on Sunday with a 1pm kick-off.
The match is just one of three Celtic games that has been moved for live satellite coverage.
The champions’ trip to face St Johnstone at McDiarmid Park will now be played on Sunday, February 5 with a 12.30pm start.
And the encounter in Inverness against Caley Thistle will be shown on Wednesday, March 1 with a 7.45pm kick-off.
All three matches will be beamed live on Sky Sports.
Meanwhile the Bertie Auld signed copies of That Season in Paradise are flying out the door!
Bertie only signed a very limited number and we have around 40 left. If you want to get yours order now at www.cqnbookstore.com
Orders are all posted straight away so plenty of time for Christmas. 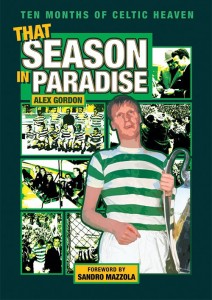