Celtic Quick News on News Now
You are at:Home»Latest News»TIERNEY REVEALS DEBT TO LENNY
By CQN Magazine on 23rd May 2019 Latest News

KIERAN TIERNEY has paid Neil Lennon the ultimate accolade by admitting Celtic would not be heading for a treble treble without his guidance.

The Scotland international left-back is convinced the Hoops would not have been in a place to make history in the Scottish Cup Final against Hearts at Hampden on Saturday if it had not been for the Irishman.

Lennon, of course, answered the call to return to the club in February following the sharp departure of Brendan Rodgers to Leicester City only 24 hours before a crucial Premiership confrontation at Tynecastle where the Hoops had lost earlier in the season.

Three days later, the holders were due to return to Edinburgh for an extremely difficult Scottish Cup quarter-final tie against Lennon’s old club Hibs at Easter Road, another ground where Rodgers had met with failure two months earlier.

It was a crucial period for Celtic as they stepped onto soccer’s tightrope where one slip would have seen the hopes of unprecedented success obliterated in the capital.

A stoppage-time goal from Odsonne Edouard brought three vital points in a 2-1 victory over Craig Levein’s side and then James Forrest and Scott Brown stepped up to be counted with excellent strikes in the 2-0 win in Leith.

Tierney insisted the caretaker gaffer is the biggest factor in the club now being 90 minutes from a place in the annals of fame.

The defender, speaking to the Daily Record, said: “We wouldn’t have won the league or been in this position without him.

“He’s been great for us since he came in. He’s steadied us when we needed it. 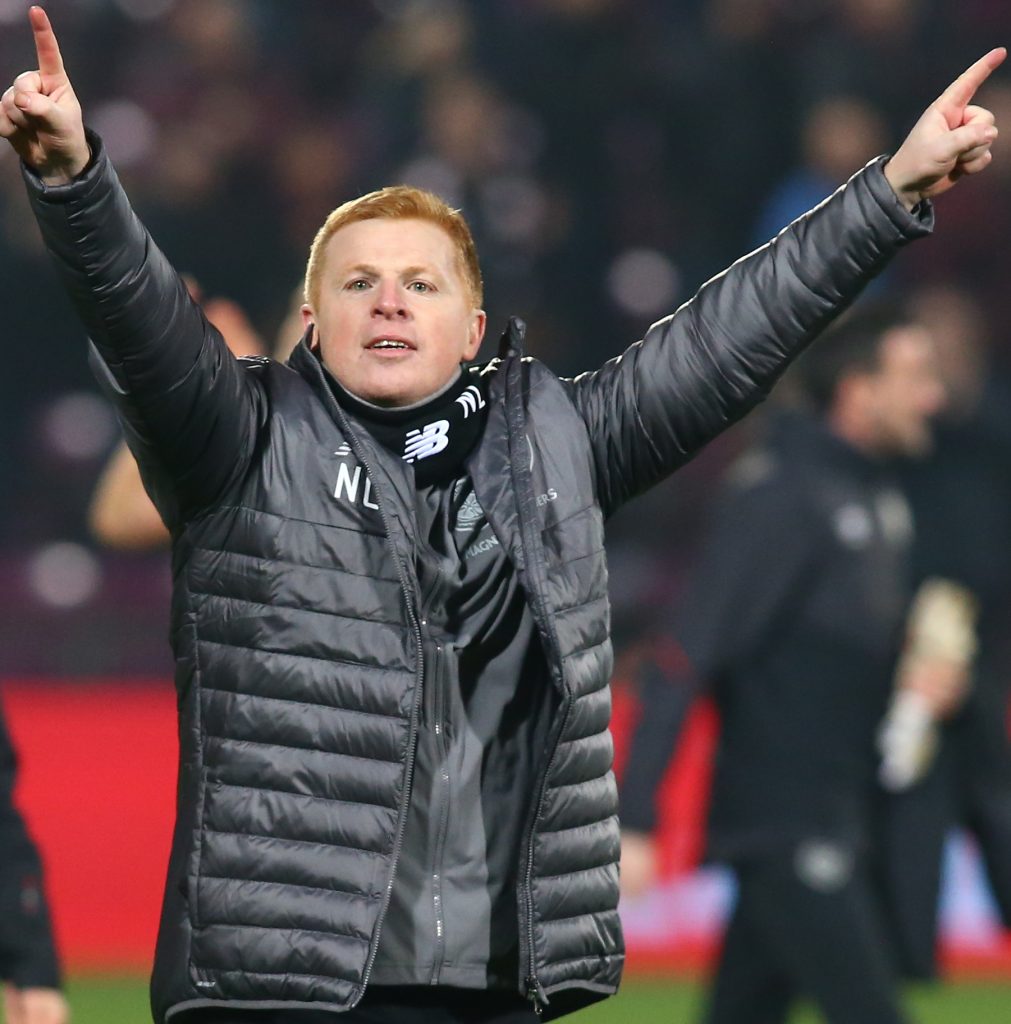 CAPITAL GAINS…Neil Lennon celebrates his Celtic return with a 2-1 win over Hearts at Tynecastle.

“As soon as he came in was two tough games with Hearts away and Hibs away and those games could have changed our season.

“For him to come in and do that so quickly and have an impact on us every day in training was massive for us.

“He knows how to win as he’s been here before as both a player and a manager.

“So for us to have that faith in him as we know he’s been here and done it.

“He knows what he’s talking about and that’s a big thing which gives all of the players confidence.

“Boys like Scott Brown, Mikel Lustig and Jamesy Forrest have all worked under him before, so that also helped the transition for everybody.”

Tierney, who has declared himself fit for the Hampden showpiece, as CQN reported last night, added: “For me, I’m really enjoying it. I may be playing through pain, but I’m still playing with a smile on my face and enjoying every minute and learning from Neil.

“I have had meetings with him as well which I’m learning from.

“John Kennedy has also been a massive help to me as has Damien Duff.

“So, it’s a good three and everyone is enjoying it.”