NORWEGIAN skyscraper defender Kristoffer Ajer has hailed skipper Scott Brown for his motivational skills – as well as his goalscoring prowess!

The 33-year-old Hoops midfielder scored his first goal in two years last week when he sent a screamer flying high into the St Johnstone net in the 5-0 Scottish Cup rout at Parkhead.

And Brown repeated the feat, albeit with a deflection from Kilmarnock defender Alex Bruce, to hand the champions a last-gasp triumph at Rugby Park last night.

The victory moved Brendan Rodgers’ side EIGHT points clear at the top of the Premiership in their determined bid for their EIGHTH successive title.

And, coincidentally, it was their number EIGHT who was inspirational and instrumental in the giant step towards another crown.

Brown was red-carded for the celebrations with the fans that kicked off a dramatic finale to a tough and tetchy contest against Steve Clarke’s outfit.

“But, obviously, we went into the game really up for it and wanting to get the three points.

“He was speaking all about the performance and getting the result. 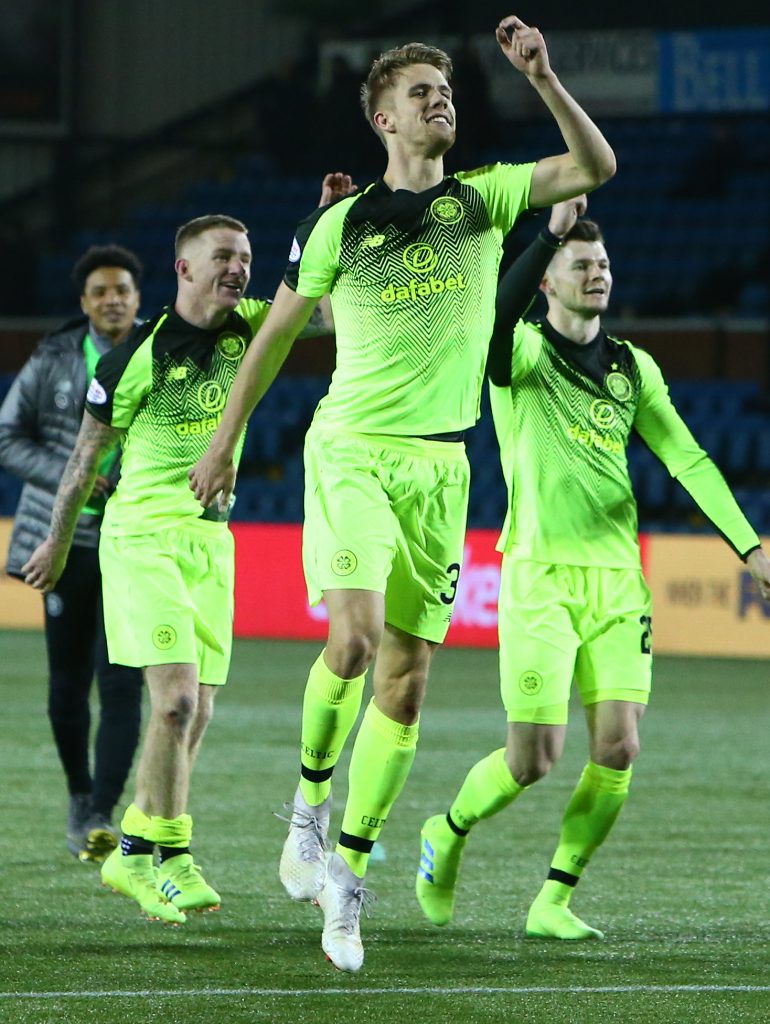 “That’s Broony scored twice in a week now. He’s delighted with that and he’s such an important player for us. To score the winner like that was just like him.

“He was on a yellow card, so when the fans came on to the pitch to celebrate with him and you know there’s the rule. There can be no complaint about that at all, but in the heat of the game you are just extremely happy to score the goal.”

Ajer added: “There’s no better feeling in football than to win in the last minute. It makes it even more special.

“Kilmarnock made it really difficult for us as expected, they are a very strong side.

“It’s always difficult to go to Rugby Park, so it was very pleasing to leave with three points. To get another clean sheet was also very good for us.

”When you play so many games in the league you need to focus on yourselves. But we knew it was an opportunity to get another three points and we were delighted to get them.

“We’ve not been happy with the performances in the last few games at Rugby Park.

“But you have to respect Kilmarnock for that, as well. They have been fantastic and this is one of the toughest away games you can play.

“We showed determination and that’s how it needs to be at places like Rugby Park. They’ll fight and try to win every second ball, so if you’re not up for it you will lose.

“You need to fight first and than hope your quality comes through.

“We created enough chances and, thankfully, we came up with the winner.”