CALLUM McGREGOR welcomes the opportunity of “settling scores” with Cluj in the Europa League group stages.

The Scotland international midfielder, who has scored 11 goals in 55 European appearances, is positive the Romanians will see the REAL Celtic in their next two games after the Hoops’ dismal showing during the sensational Champions League exit at Parkhead last month.

Neil Lennon’s men had THREE opportunities to reach the play-off stages of Europe’s elite tournament and blow them all as they toppled to a 4-3 defeat in front of their own stunned fans to go out on a 5-4 aggregate.

It didn’t help that Dan Petrescu’s side hardly laid a glove on Slavia Prague at the next stage and lost home and away to crash 2-0 on aggregate. 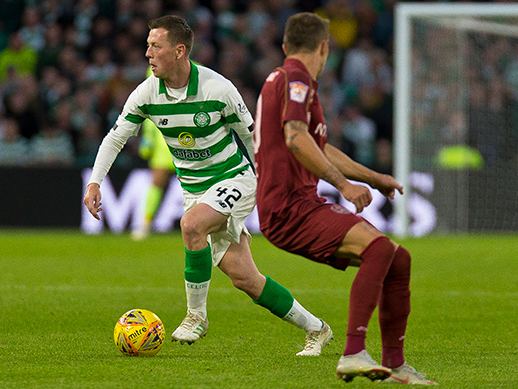 ON THE RUN…Callum McGregor in action against Cluj.

Now, just like Rosenborg last season, they are now in line for a second double-header against the eight-in-a-row champions in European competition.

McGregor, speaking exclusively in this week’s Celtic View, said: “It was inevitable that we were going to get them again and it’s a good thing that we can go and almost set the record straight in terms of us owing them a performance and a result.

“I’m sure it’s one that the players and fans will want to try and settle that score in.

“There was that disappointment against Cluj, but the team has responded very, very well since then.”

McGregor is looking forward to the other showdowns against top seed Lazio and French Cup winners Rennes.

He added: “Everyone knows Lazio. They’re a top Italian side and Italian sides have a big history in European competition. 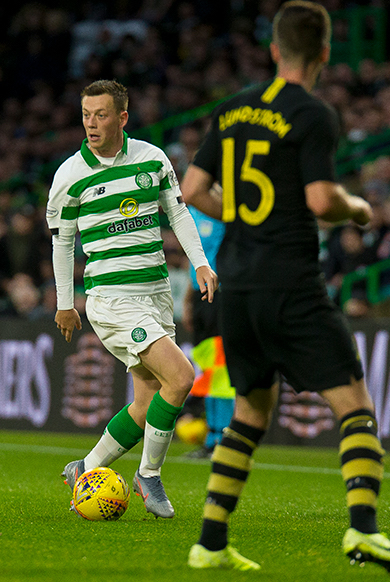 IN CONTROL…Callum McGregor poised and assured against AIK Stockholm.

“When you look at some of the other names in pot one, I think we’ve got a good draw in terms of bringing them to Celtic Park, so that will be a good night and it’s something we’ll look forward to.

“The big team is always the one the fans want to go to and this time the travelling’s not too bad, so I’m pretty sure they’ll have that trip earmarked.”

Anticipating the challenge of Rennes, the European veteran added: “When we played them here in July, that might have been their first game back for pre-season, so you can’t judge too much on that match, but pre-season is all about building blocks.

“The first game, which is away in France, is always important to get points on the board and in football that momentum can take you anywhere.

“We’ve had good results away from home already this season, so that gives us confidence for the group games.’