CALLUM McGREGOR is zeroing in on a European double target in 2020.

The Celtic midfielder will be involved in the Europa League knock-out stages following their 2-1 win over Lazio a fortnight ago that earned the Hoops a place in the last 32 with two section games till to be played.

McGregor will be in action against French outfit Rennes at Parkhead a week tonight with an encounter against Champions League conquerors Cluj due in Romania on December 12.

Scott Brown’s anchorman partner is also looking towards the Euro 2020 Play-Offs in March as he attempts to steer Scotland towards their first major tournament since the World Cup Finals in France in 1998 when Craig Brown was the manager.

Since then, Berti Vogts, Walter Smith, Alex McLeish (twice), George Burley, Craig Levein and Gordon Strachan have tried and failed to make the breakthrough. Former Celtic duo Tommy Burns and Billy Stark and ex-Wigan gaffer Malky Mackay also had roles in caretaker charge of the country during the unsuccessful sequence. 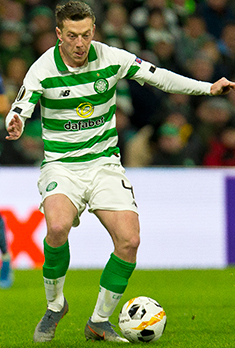 FOR CLUB…Callum McGregor in action for Celtic.

FOR COUNTRY…Callum McGregor with the captain’s armband in the 3-1 win over Kazakhstan.

Now Steve Clarke is in charge and, after three successive wins over San Marino (6-0), Cyprus (2-1) and Kazakhstan (3-1), he is preparing for tomorrow’s draw that will reveal Scotland’s opponents next year who will try to their way to the Euro 2020 showpiece.

“It’s about trying to bank that feeling. We will go away and obviously club stuff will take care of itself between now and March. But when we come back, we will all be in a better place. The manager will feel good about himself, the players will feel good and we can go about trying to fill this stadium and make sure we get there.

“Slowly, but surely, we are getting there. It is a new group of players and we changed manager halfway through the campaign which is always difficult, as well. Straight away, the gaffer is under pressure to turn it around. I think it has been a positive end to the campaign.

“Obviously, it is disappointing we did not qualifym but the work we did last November got us to a place where we can try to qualify. We have to be positive and go into these games and really be confident we can do it.

“Once you start to get one or two results everyone starts to think: ‘Alright, maybe we have changed’. I think that’s why it is important to get these two wins together. We could easily have drawn the Kazakhstan game, but we went on to win 3-1 and finished really strongly.

“Come March, everyone is feeling good about it and we turn up and play with that intensity again.”