IT was a stumble and not a swagger, but goals from James Forrest and Mikey Johnston edged holders Celtic into the League Cup quarter-final at a tense Parkhead this afternoon.

It took a strike from Forrest six minutes from the end of extra-time to give the Hoops a record-breaking TWENTY-EIGHTH successive victory in domestic Cup competitions.

However, for far too long they were wobbling on a tightrope with no safety net in sight.

The Fifers were in Glasgow to make a fight of it and they did their manager Stevie Crawford proud.

As early as the second minute, Nir Bitton displayed his range of passing with a breathtaking 60-yard through ball that dropped at the feet of Leigh Griffiths, but the striker had strayed just offside and the move broke down.

There was a scare for the Hoops in the 10th minute when the club’s most expensive defender, £7million Christopher Jullien, made a mess of a passback that was snapped up by Kevin Nisbet who raced down on the unprotected Craig Gordon and, fortunately for the holders, knocked the ball wide of the far post.

The French centre-back breathed a sigh of relief – it could so easily have been the opening goal. 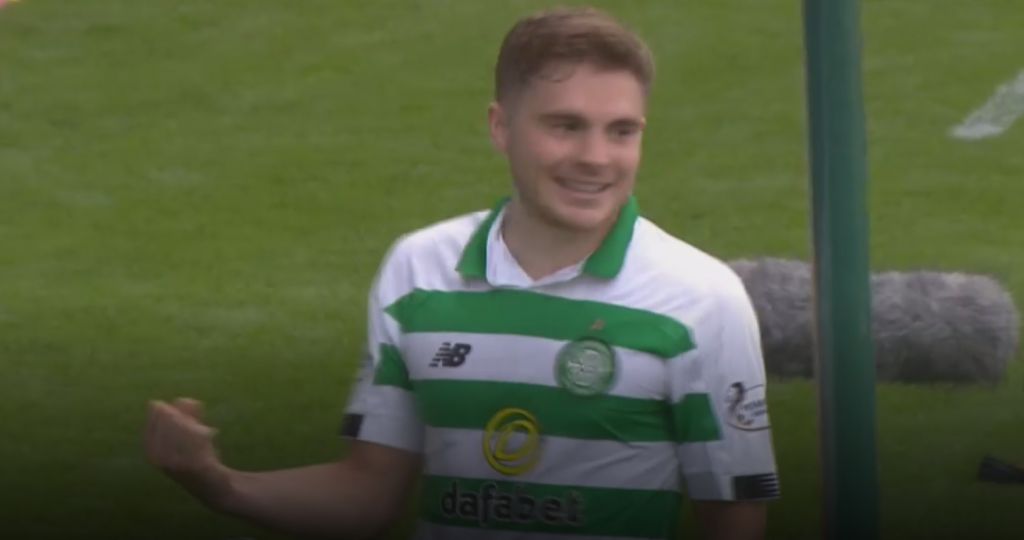 Five minutes later, Ryan Scully maintained his concentration as a dangerous bouncing shot from Bitton hit the target, but the Fife keeper held on to repel the threat.

Jullien was struggling against the robust Nisbet and his passing out of defence was often wayward in an unsure and uncomfortable performance from the former Toulouse defender.

However, there was a flash of menace from jinking Johnston as he thumped in an angled drive, but Duffy was equal to the shot and managed to turn the ball round his right-hand post.

Boli Bolingoli, snubbed for the Tuesday flop against Cluj, was doing his best to add some urgency to the attack on the left, but was making little headway against a well-organised rearguard.

Just after the half-hour mark, a fine move ended with Callum McGregor having a dig with his left foot outside the area and once again Scully was in line to make the save.

The Fife keeper was enjoying his day at Parkhead and shortly afterwards he pushed away a rasping effort from Bitton and held the follow-up cross.

Griffiths and Odsonne Edouard were looking for better service as the Hoops toiled to inject some pace into their passing and movement and Johnston looked the most likely to fashion an opening with his raiding on the flank. He wasn’t slow to have a go, either, and tried his luck from range, but the ball zipped over the crossbar.

Three minutes from the interval, Jullien’s miserable afternoon continued when he missed with a header at the backpost when it looked easier to score. Scully picked up the ball for a goal-kick and must have been thanking his lucky stars he wasn’t finishing it from the back of the net.

Remarkably, the Frenchman was the culprit again when he missed the target moments afterwards.

It was goalless when referee John Beaton blew to call a halt to proceedings in a game that lacked excitement or the tempo to generate a reaction from a crowd of around 30,000.

Griffiths delivered a whiplash free-kick effort shortly after the break in an effort to settle the nerves on and off the pitch, but his drive was about three yards wide of Scully’s upright. 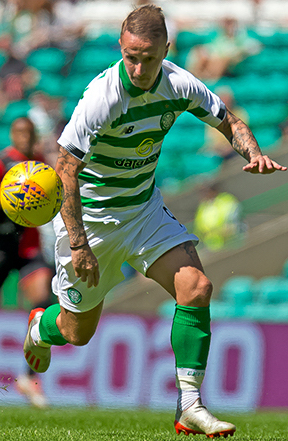 FREEWAY…Leigh Griffiths tried his luck with a deadball effort.

Little magician Johnston – who else? – conjured up the opening goal with a cross-cum-shot that completely flummoxed the heroic Scully who had no answers on this occasion.

The wideman attempted a 30-yard curler from an angle that looked it may have been meant as a ball into the box for someone else to attack, but it swept high into the top corner of the net.

Intentional? Or accidental? No-one was complaining as the players and supporters celebrated in joy as much as relief.

A minute afterwards, Forrest came on for Griffiths as Lennon shook up the attack to keep the pressure on the gallant Championship side.

Johnston latched onto a pass from the rampaging Kristoffer Ajer to set up Ryan Christie, but his deft curling effort swept wide of the post.

There was a blow for the Hoops when the Norwegian had to go off after falling awkwardly. He was replaced by Olivier Ntcham with Bitton moving into central defence.

A minute later, the Fifers levelled while Ajer was still making his way round the touchline. Substitute Andy Ryan raced away from McGregor to pick out Tom Beadling and he fired a right-foot drive beyond Gordon. 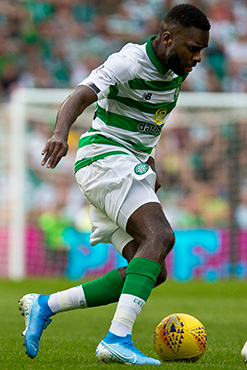 ON THE BALL…Odsonne Edouard toiled for the breakthrough.

The travelling support went wild with delight as the Fifers celebrated as though they had won the Cup.

Celtic’s reply was instantaneous with Johnston walloping in a shot that was saved by Scully to prevent a quickfire reply from the holders.

As full-time edged closer, the Hoops piled forward and their luck was right out when Bitton got up at the far post to direct a cross from a corner-kick towards goal and looked on in disbelief as his header clattered the crossbar and bounced to safety.

Seconds before extra-time, Christie picked out Jullien with a free-kick, but, yet again, the Frenchman misdirected a wayward header wide of the target. It was not turning out to be a memorable day in the east end of Glasgow for the defender who could have scored a hat-trick with a bit more craft in his finishing.

Lennon replaced Bolingoli with Jonny Hayes for the start of the additional half-hour.

The pressure was ramped up and two efforts from Ntcham and one from Christie worried Scully, but the Fifers continued to escape as they lived dangerously.

The Frenchman hoped for third time lucky with a wonderful long-range drive and Scully produced a brilliant diving save to his left to push the ball for a corner-kick.

It was getting a bit frantic when the keeper clattered Jullien as the deadball came in and it looked as though the ref was pointing to the penalty spot, but the Hoops had to accept the consolation of a corner-kick, the match official adjudging Scully got a fist to the ball before the accidental clash. The incident summed up Jullien’s day.

The second period of extra-time started with Scully once again defying the Celts as he diverted a close-range effort from Edouard. It was turning into a procession, but the goals were proving elusive. 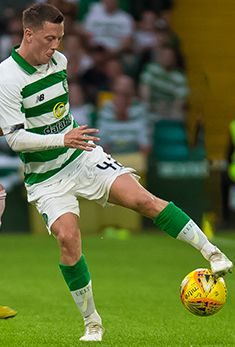 MAN IN THE MIDDLE…Callum McGregor was back in midfield.

Ntcham was obviously eager to get the vital second and he powered forward before unleashing a shot that carried just over the bar.

However, in the 114th minute, there was an almighty cheer that reverberated around Parkhead and beyond as Forrest claimed the goal that would take the Hoops into the quarter-final and dodge a nerve-shredding penalty-kick showdown.

Elhamed found the big-game player with a neat pass and he latched on to it before powerfully shooting for goal. There was a touch as it sped past the helpless Scully – and, at last it was game over.

But did it have to be such a difficult hurdle to clear?